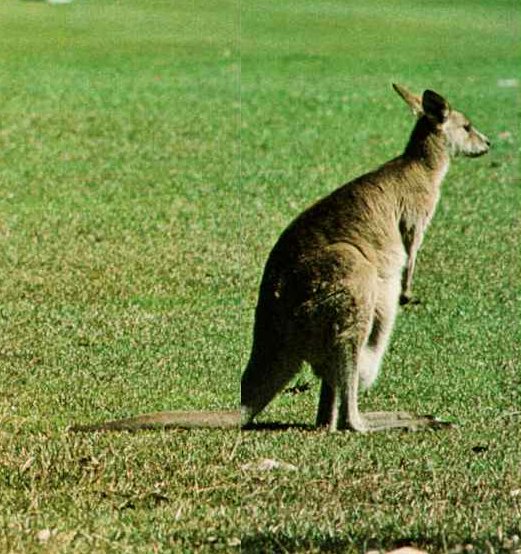 A large Marsupial with a small head, short fore-limbs, large powerful legs, and a thick tail. They move by hopping on their back legs. The thick tail allows for better balance then most two-legged creatures and adds a +2 circumstance bonus. Also, a kangaroo's powerful legs work just as well whether they get a run up or not, and as such they get no penalty for jumping from standing and a +10 bonus to jump checks. Whilst generally peaceful herbivours, these animals can be provoked into attacking, usually by getting between a male and his females or a mother and her joey.

When attacking, a Kangaroo appears to start boxing. In actual fact it attempts to grapple. Once grappling, it uses its tail for support and kicks with both of its legs.

Note that there are 2 other attack patterns that real 'roos make - one is to atempt to disembowel once grappled (their rear legs have large, strong nails) and the other is to leed the attacker into a body of water. They are powerful swimmers and will use their front feet to drown their attacker.