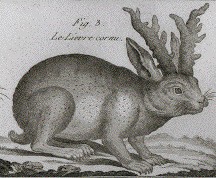 You here rustling in the nearby bush, and think see something out of the corner of eye as you turn to look.

A jackalope is a mythical beast that looks like a rabbit with horns or antlers.

Jackalopes are shy creatures and normally won't attack, but it can be dangerous if they provoked.

A jackalope may be selected as a familiar if the character has the Improved Familiar feat and a caster level of at least three. It grants its master a +2 bonus on Hide and Move Silently checks.