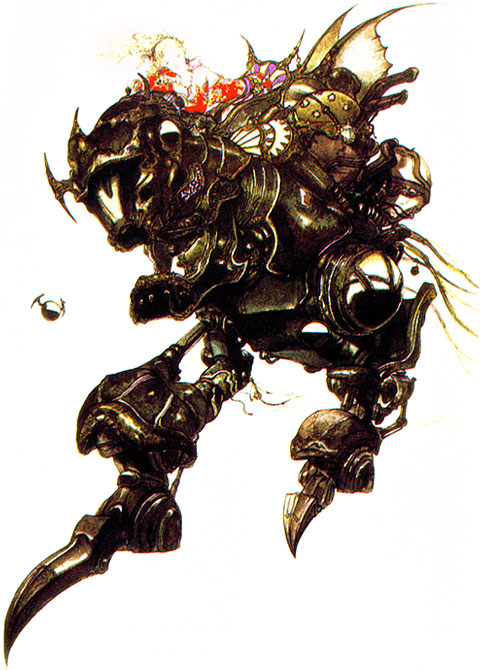 A pilot aboard an Iron Bird.

The bipedal construct approaches with a chicken-like gait, its head bobbing and eyes lit up with pale yellow arcane flame. It was not unlike a giant mechanical cast iron bird, with gears, tubes, and pistons hidden just under the sliding heavy iron plate armor that made up its form. With a hiss of steam, it charges!

The E-8GR "Iron Bird" is a clockwork construct developed during the Great Wars of Rhe as an all purpose artifical steed in battle. Soldiers mounted atop the beasts would fire heavy projectile weapons or cast spells, then charge and attack with the creature fighting on its own accord. Its partial intelligence, thanks to the shadow mentality it possesses, was a boon allowing its rider to fight on its own without much worry that the construct would stray from the intent of its orders. However, they're dull pseudo-intelligence made them somewhat predictable until they discovered more effective ways of dealing with new situations.

Iron Birds are steam powered, and possess two large water tanks on their backs. Because of this, while Iron Birds do not sleep or breath, they do "eat" by drinking water, refilling their tanks for the eternal fires in their bellies to warm. When low on water, an Iron Bird will seek it out, and lacking a viable source in range, will shut down all movement until the situation changes. It can usually go three days without refilling. They possess their runic matrix, the programming which runs them, typically on the inside of their mouths, etched on a large metal sphere.

Iron Birds are 9 ft. tall and weight about 3000 lbs. They do not speak, but can make hisses and screeches by controling its steam release. Its wings, large steal plates, can spread out revealing a series of sharp serrated blades used for slashing.

After the war, the Iron Birds were largely converted to peacetime purposes, and its combat portfolio suppressed by reducing its charisma by 1. As such, most Iron Birds will not respond to attacks, or accept attack commands, at least not with any sort of intelligence. However, if this reprogramming is suppressed with a successful DC 30 Spellcraft check, its charisma and portfolio are restored. Iron Warbirds are models not suppressed, and specifically built for combat, and thus possess superior ability scores, speed, and automatic combat abilities.

Improved Grab (Ex): To use this ability, a iron bird must hit with its bite attack. It can then attempt to start a grapple as a free action without provoking an attack of opportunity.

Rend (Ex): A iron bird that wins a grapple check after a successful bite attack establishes a hold, latching onto the opponent’s body and tearing the flesh. This attack automatically deals 2d6+9 points of damage.

Berserk (Ex): Due to the sppression technique, iron birds which are not build for war are a little unstable. When a iron bird enters combat, there is a cumulative 1% chance each round that its altered programming gets stuck in a loop and the iron bird goes berserk. The uncontrolled iron bird goes on a rampage, attacking the nearest living creature or smashing some object smaller than itself if no creature is within reach, then moving on to spread more destruction. The iron bird’s creator, if within 60 feet, can try to regain control by speaking firmly and persuasively to the construct, which requires a DC 19 Charisma check. It takes 1 minute of inactivity by the iron bird to reset the construct’s berserk chance to 0%.

An iron bird’s body is assembled from 3,000 pounds of iron plates, gears, and pistons with fiberous tubes and pressure bladders worth 5000 gp, and washed with rare shadowy tinctures and admixtures costing at least 20,000 gp. Additional HD cost an extra 2000 gp (1000 gp and 80 xp if crafting yourself). Assembling the body requires a DC 15 Craft (metalworking) check, a DC 15 Craft (clockwork device) check, or a DC 15 Knowledge (architecture and engineering) check.

Iron Warbirds have an additional 15,000 gp surcharge due to their superior abilities, but otherwise operate the same way.