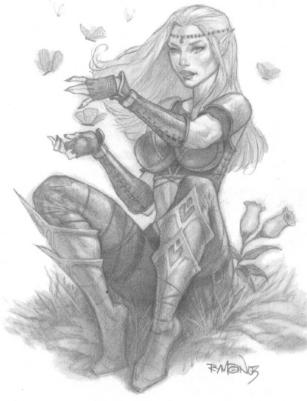 This is a race from 3rd edition's Bastards and Bloodlines which answered many questions about what happens when you mix what with what. In it was discovered the good the bad and the ugly, and now I present you with a race of purity that is anything but ugly: the Houri. Half Elf, Half Nymph.

Opening from Bastards and Bloodlines[edit]

"Nymphs are immortal creatures of great beauty and fine bearing. They rarely bear children, and when they do it is almost always with a fey mate. Such children are always female and always nymphs. On rare occasion a nymph takes a nonfey lover no offspring is usually possible, for nymphs are to far from mortal blood to bear offspring with humans, halflings, or orcs. Outside the fey races only elves are able to sire a nymph's child, and such pairings are extremely rare. While elf-blooded nymphs are always female, they are not true nymphs themselves.

These Houri, also known as muses, artemisians, and nineveh are fetching creatures of elven wit and fey grace. Houri rarely stay with their mothers, instead joining some mortal community where they can gain acceptance and often becoming heroes, wives, mothers, and matriarchs.

Though not as lovely as their mothers, houri are far more attractive than any elf or human, a fact that brings them great power as well as constant peril. A Houri must always be on her guard, for wars have begun to win one's favor, and the basest of villains have put away all other thought once they have decided to capture one. Fortunately, Houri are more than just pretty faces, able to defend themselves as well as gather companions and allies to their sides."

"Houri learn at an early age they can affect those around them without meaning to. As they mature they are cautious about what they say and who they say it to. A Houri wishing to compliment a young bard is precise in her wording, leaving no room for misinterpretation of her intention. Similarly, if a Houri must correct or chide an individual, she does so in the gentlest possible fashion. Despite this, most Houri are plagued by jealousy, obsession, and unwanted attention throughout their lives.

A Houri gained in a caring environment is generally taught to defend herself before reaching her majority at nineteen years of age. Unlike most crossbreeds, Houri are accepted by nearly any community they choose to become a part of, but most feel they need to see more of the world before settling down permanently. Houri are cautios when making friends, but most gather a collection of close and beloved comrades. Friends both protect the Houri, and allow her to enjoy friendly companionship with those she trusts not to ask for more than she is willing to give."

"Houri have a great love of beauty, art, nature, and music. They appreciate all expressions of love or kindness and are particularly fond of good poetry (though amused by even the worst doggerel) . They are in no way flighty or simple, however. Houri are intelligent, cunning, even calculating when they need to be. A Houri can become downright bloodthirsty when defending herself or those she cares for."

"Houri are among the most beautiful of all mortal races. They are universally fair, though their body types range from slender to buxom and plump. They have flawlessly smooth skin, luxuriant hair, bright eyes, perfect features, and delicate, pointed ears. A Houri may have any skin, eye or hair coloration, depending on the appearance of her parents. Pale, creamy skin, blond hair, and green eyes are most common, but houri have been born with brown, black, or well tanned skin and any imaginable hair or eye color.

Houri never show signs of age, though they do mature. They follow the normal rules for ability score adjustment, but once they reach their middle years they take on an ageless beauty, making it impossible to determine the relative age of a Houri past their youth. Even in death Houri do not loose their beauty, for their bodies never suffer the ravages of vermin or decomposition."

"Most Houri become spellcasters, with druids, bards, and sorcerers most common. A Houri is perfectly capable of physical violence, however, and more than one foe has been taken aback by the power of Houri paladins or the devious manipulations of Houri rogues. Many Houri are multiclass characters, taking at least one or two levels of druid before settling on another career.

"Houri get along with most any race or class, though they are sometimes followed and hounded by young bards wishing to compose epics of their beauty. Though Houri appreciate dedication to defense of the good and innocent, some paladins are to strict and conservative for Houri to feel comfortable around them."

" Most Houri are neutral good, valuing kindness, justice, fair play, and honesty but without being convinced there is one true path for achieving and protecting these things. Evil Houri are extremely rare, and almost always a result of a disillusioning trauma. These Houri often feel the world is to sick to eve be worthwhile and seek to destroy everything as the only way to prevent more pain and evil, without realizing they have become the very thing the abhor. Neutral Houri are more withdrawn from society, convinced they should avoid interaction with mortals entirely."

"Unlike most crossbreeds, Houri are accepted by nearly any community they choose to become a part of, but most feel they need to see more of the world before settling down permanently."

Houri have a tendacy to worship gods of the fey such as Titania, Emmantiensien, or Oberon who have a tendancy toward nature. However, it is not uncommon for them to worship Elven gods of nature such as Rillifane Rallathil either.

Depending on who raises them, Houri can grow up speaking either language of their parents primarily: Elven from their father or Sylven from their mother. However they do not limit themselves to simply those to. Being creatures who love to explore the world, the may learn to speak dozens of languages other than what you'd expect.

Elves are often named names that are designed to flow off the tongue as easily as a breeze through the woods. This strategy carries over into the naming of their Houri children as well, though sylven words are often added to the mix.