The Herregor campaign setting is a little different than some. This setting is "Sixgun Fantasy" not "steampunk". It's part spaghetti western, part classic swords and sorcery. It's about black hats and revolvers, black magic and monsters, factories belching smoke into an otherwise pristine sky, and those wonderful morally grey antiheroes from the classics like The Good, the Bad, and the Ugly and Conan the Cimmerian.

Unlike many "fantasy" realms the people of this world are not stuck firmly in medieval times, mired in the pursuit of magic, and neglecting what one can do with bare hands and ingenuity. Man, dwarf, and others have been laboring steadily to regain that which they lost in the Elfwar. The level of tech is a major portion of the setting's flavor. Civilization is more than ready to embrace the new ideas and abilities presented by science and leave behind the superstition and danger associated with magic and it's practitioners. Technology has given rise to a love of education and the proliferation of information. Old ideas are laid to rest, and new things embraced. Medieval society is fading and the push towards democracy and capitalism is being fueled by an empowered middle class.

Most common folk are afraid of magic. Its unpredictable. It must be appeased before it can be harnessed. Its an art. The formulas don't always work and the rules are always changing. Not everyone has the potential, and the ones that do often abuse it. Anyone can make use of science with a bit of education, and that is comfortable. Magic takes equal parts inborn talent and raw ambition to harness with any skill.

There's also all the unnatural things given birth by magic, the strange monsters in the wilds, the things that creep through the dark in the city's sewers. There's dead things up and walking, warlocks making pacts with creatures from other worlds, infernals whispering dark promises in the ears of any who will listen, and the fae that steal children when no one is looking. Magic is not to be trusted.

Whose Side Are You On?

Shades of grey is a major theme of the setting. The bad guys may be bastards, but even the good guys have something to hide. There may be two sides to every fight, but they can both be wrong... or right. Everyone has a motive behind what they do, and that motive is as important as the deed itself.

Take the trouble brewing between the Kingdoms of Arad and Bottengard. In most campaigns these two nations would be the "good guys", and they are both composed of mostly decent folk and helmed by generally honorable guys, but they're about to go to war mostly because of greed and misunderstandings. Which side will the heroes choose to support when they're both in the wrong and no mustache-twirling villain can be found to blame it on? The choices that come from these sorts of conflicts, and trying to stick to your own set of morals while navigating these sticky situations, are a big part of the fun.

The Rise of Science

A very long time ago this world was much like ours. Only men lived in the cities and the other thinking races were nowhere to be found. These men were masters of the World thanks to science. Their science built cities and cured disease. In the name of their science they gathered information about all manner of things and forged weapons that could destroy a nation from a thousand miles away. Then one day their science tore a hole in the world and let magic in.

A small group of great minds built a machine. No one knows what it was intended for, but it weakened that which kept this world separate from the others. They experimented as humans are wont to do and they learned to punch holes through the Barrier Between on command.

At first they brought small things through - objects and curios. They studied what they found and remarked on how odd it all seemed. They made notes of strange energies from the other worlds and their interest was piqued. They opened larger holes and found the first signs of life, creatures alien to them, who sometimes sickened and died as soon as the holes were closed.

Then one day they found the Nether. Some thing came through that was terrible and unlike anything they had seen before. Many men died but in the end their weapons defeated it and their science closed the doorway between worlds. They should have learned their lesson then, but did not. They resolved to be more careful and their work continued. Such is the nature of men.

During all their experiments the scientists never imagined that they might not also be gazed upon by that which they studied. In the end it was not beasts of the Nether that changed this world into what it is today, it was the Faerie Lords that dwell in the depths of the Feywild.

Then Come the Faerie Lords

Not so long after the beast of the Nether something else come through the Barrier Between. Having watched the men experiment, the Fae sent one of their own. A true Faerie Lord did step through the hole the men made and nothing they had seen before could have prepared them for what came next. Unlike the netherbeast the being of Faerie was beautiful. They did not bring their weapons to bear as the Faerie smiled. They did not understand what it did as it wove the strands of magic to hold the gouge between open. It was far too late that they came to understand the danger that they faced. The Elf Lord took hold of the woven magic and tore the wall between asunder.

The Barrier is Broken, the World Follows

Like shattering glass the Barrier split along a million faults. Magic spilled forth into the world. The Earth shook with the fury of what had been done. Many men died. Other men where changed. In places whole countries vanished replaced with alien lands from other realities. Much of man's Science was taken from him as the laws it was built on flowed like melted wax. Then the Faerie Lords came.

No one knows why they made war on the nations of men but they did not stop until human civilization was ground nearly to dust. Their motives were alien. They might kill a man and leave the one standing next to him untouched. Destroy one town and enslave the next.

In desperation, or for lust of power, some men swore themselves to the Faerie. They traded their human souls for fey glamour and immortality. Hated by their former kin, these "Elfsworn" acted as hunting hounds, spies, and advisers for the faerie lords. For nigh unto a century the conflicts raged until one day it simply stopped.

The gateways between closed, and the Faerie Lords returned from whence they came. There are still places where the Feywild seeped through and the Elfsworn were left behind, abandoned amongst what remained of mankind by their former masters, but the war was over. Some say a band of heroes descended from the original scientists that had opened the paths between had succeeded in rebuilding the machines and healing the barrier. More likely the Faerie's mercurial nature had dictated a new game and they simply abandoned this world out of boredom.

The world they left behind was broken. The Barrier Between is thin (even now, centuries later, things trickle through). Men now share the world with the other thinking races - Halflings, Dwarves, Dragonborn, and others both fair and foul. Some are their own descendants, warped by the rising tides of magic, others are refugees from lands brought here when the Barrier was sundered all those years before. Science was all but lost. Magic had taken root in the land.

Mankind is a resilient race. They began to build. They learned to use magic and salvaged a bit of what they once knew. They lived along side the newcomer races in some places and made war with them in others. Civilization was born anew. Cities grew up from the bones of refugee camps. The world moved on. 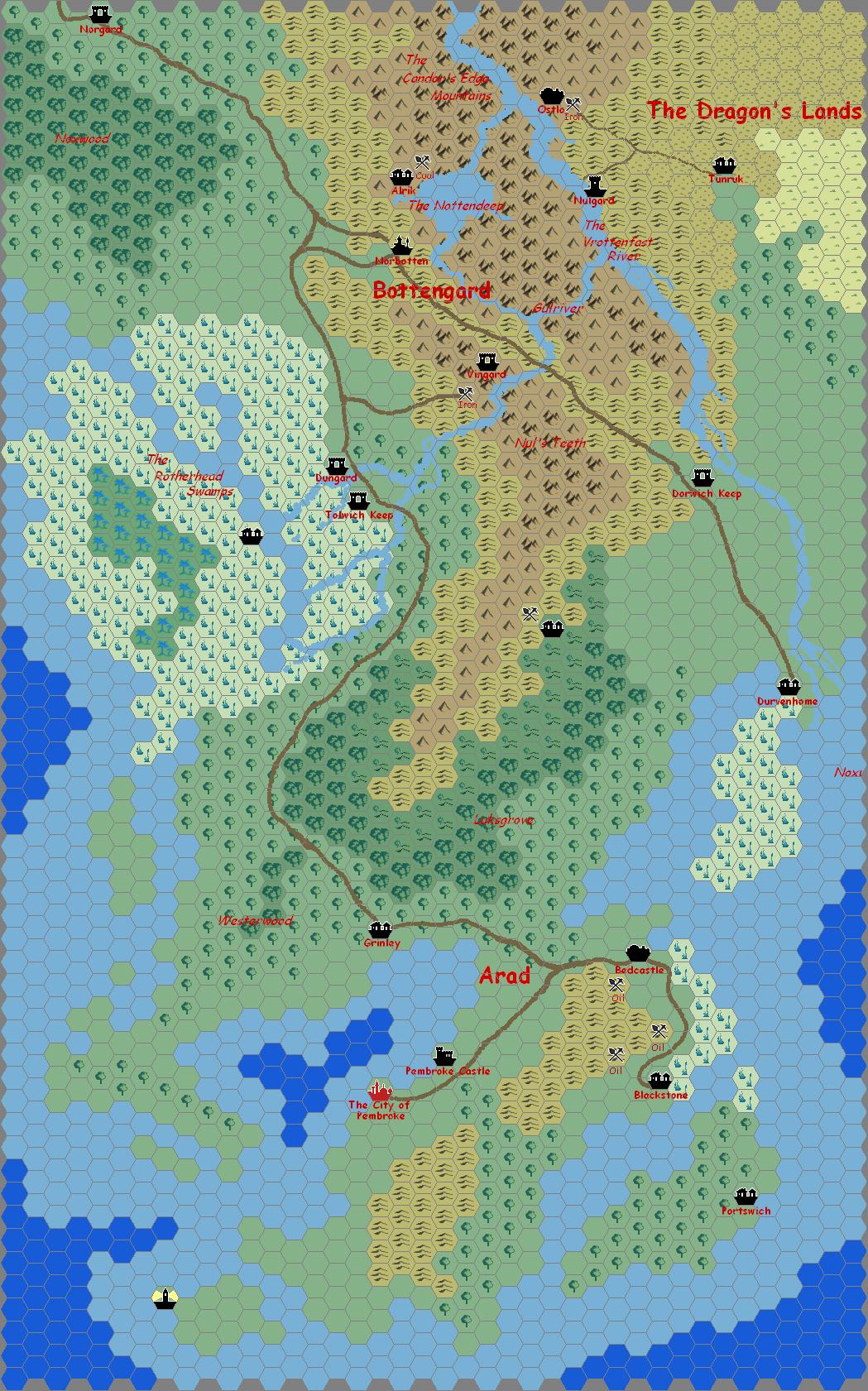 It has been several centuries since the end of the Elfwar, and nearly all of the history of the previous world was lost in the dark ages that followed. To most that now live things are as they have always been. Magic is an intrinsic part of the world, the other thinking races are common sights, and Elves are bogeymen meant to scare children. The world is once again poised at the brink of an industrial revolution as the disciplines of science are rediscovered.

The Barrier Between has never been the same as it was. It is still "thin", things bleed through. Men who know how can tap into the power that seeps forth from both the Feywild, the Nether, and other unknown realms. Most distressing is that some men know the ways of widening the cracks and letting more than just eldritch energies through. There are still beings beyond that have an interest in the world.

The Kingdom of Arad has become one of the most influential powers in the current political landscape, rivaled chiefly by the dwarven nation of Bottengard. Both kingdoms are currently embroiled in a dispute for territory and resources, conflict has begun to flair up along their borders, but all out war has stalled due to the recent development of what seems to be a fledgling draconic nation.

Both nations made use of dragonborn mercenaries, but recently their mercenary companies have begun to cease renewal of their contracts and left for parts unknown. It has since been learned that they have been gravitating to the service of a true dragon, called Dramenvagen by the dwarves, in the badlands that border both nations. Known as Dramenvaar, literally the “Dragon’s Lands” in the dwarven tongue, it remains to be seen how this will affect the conflict between the nations.

To the south, across the sea, three of the noble houses of Turath Nor have risen to power and reached an uneasy truce. They still jockey amongst themselves for the emperor’s seat, but they have done so without open conflict for some decades. This has allowed them to begin turning an eye outside their own borders for the first time since they found themselves on this new world. They have begun by making diplomatic overtures to the Kingdom of Arad. They seek this alliance with fervor now as the tide of the Kurgish empire threatens to crash upon their walls.

An embassy of sorts has formed in the massive Port Capital of Pembroke, and it is not such an odd sight to see one of the Turathians out and about in the metropolitan city. This might serve to alienate the forming nation of dragonborn in the Northwest if formal alliances are forged, as the scaled race has not forgotten their age old enemies. This has not gone unnoticed by the dwarves of Bottengard; they have begun subtle diplomacy with the Dragon, and have already offered aid in the formation of infrastructure and open trade with the dragonborn though they had clashed with Dramenvagen in previous generations.