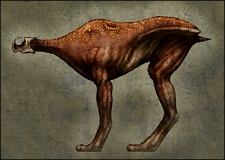 Standing in the middle of the field is a strange creature. Its obsidian colored skull is exposed resembling a ring like cage. All the while, a long cylindrical proboscis extends from the gap in its skull and flicks along the ground. But, perhaps the most bizarre portion of this creature is its legs, both of them. Where a regular quadruped would have two legs on its front and hind quarters. This creature only has 1, its 4 limbs seeming to meld together into twin legs. As it walks along its flexible spine undulates and arches like a coiled spring.

Inhabiting the plains of both hemispheres on Darwin IV, these swift bipeds can run faster than 40 mph, aided by a remarkably flexible back that allows it to stretch out for 45-foot-long strides. The structure of its two heavily-muscled legs suggests descent from a quadrupedal ancestor. Since two legs present a greater challenge to maintaining balance while moving at high speeds, the gyrosprinter possesses a pair of small post-like organs above and behind its neck that function like bubble levels. Two huge nostrils on its back ensure a steady supply of Darwin IV's air to fuel its high energy levels. Tiny biolights glow on its hairless body.

A Gyrosprinter is a peaceful creature. It lacks any sufficient skills in combat or any weapons necessary to defend itself. Its best defense and first choice is to run from its enemies. Using its Sprint ability immediately to gain distance.

Alien Anatomy(Ex): Due to the location of a Gyrosprinter's brain in its alien body, a Gyrosprinter is not slain by the effects of severing its head. However, it is effectively rendered blind by do so.

Blindsight (Ex): A Gyrosprinter possesses blindsight out to 200 ft. A Silence spell renders a Gyrosprinter effectively blind for the duration of the spell.

Inhalation Vulnerability(Ex): Due to the large nostrils atop its back and its lung power, a gyrosprinter is vulnerable to effects that involve inhalation. When in an environment where there is a poison with the inhale descriptor a Gyrosprinter takes a –2 penalty on Fortitude saves. The same goes for spells of the same descriptor, as well as smoke and etc.

Instability(Ex): Do to its unique design, has a -4 penalty on its checks vs being bull-rushed or overrun.

Sprint (Ex): Once per hour, a Gyrosprinter can move ten times its speed (500 feet.) when it makes a charge.

A Gyrosprinter has a +8 racial bonus on Balance,Jump, Listen, and Spot checks. In addition, a Gryosprinter uses its dexterity modifier instead of its strength for jump checks.