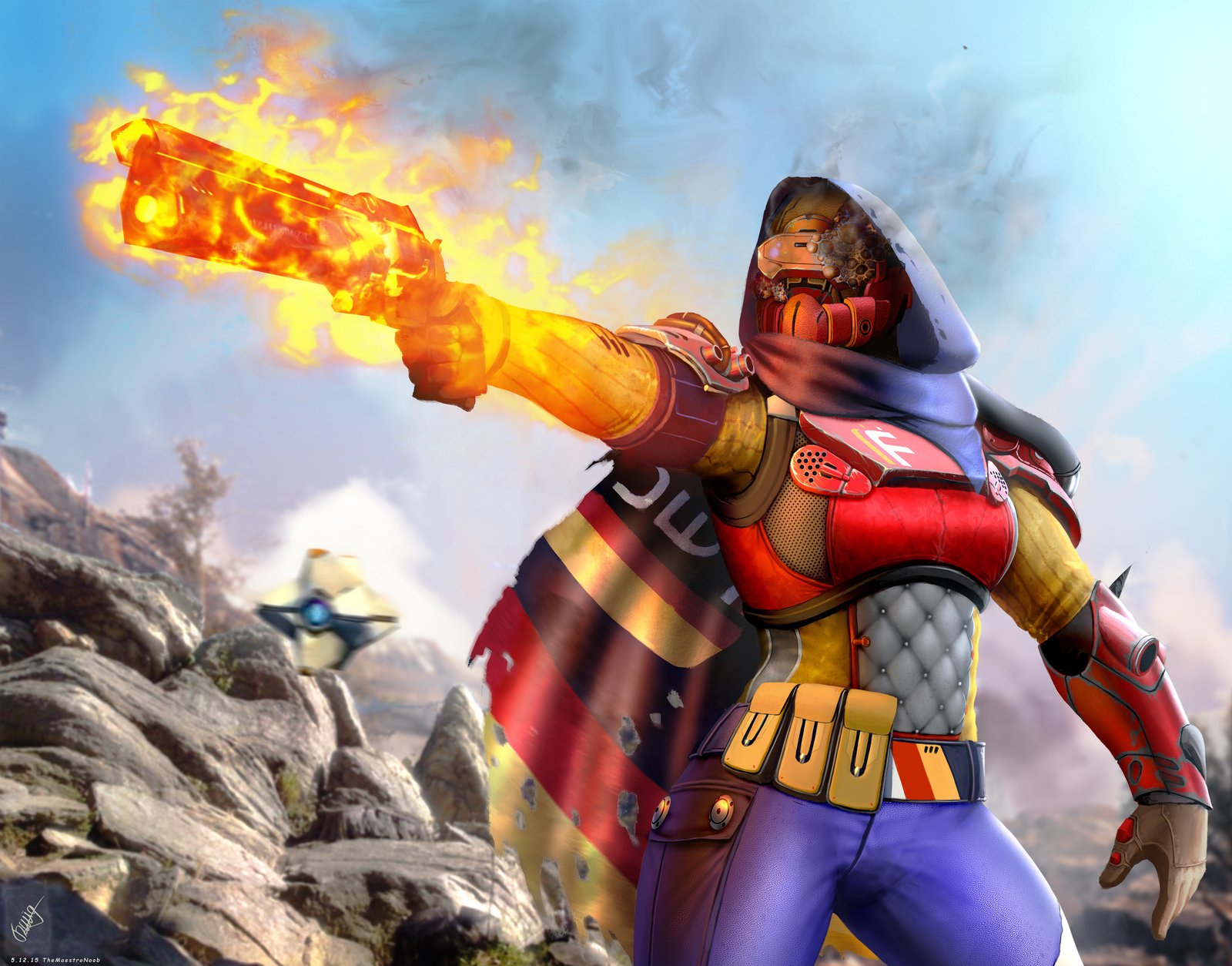 Gunslingers are elitists. Nothing but the best is good enough for their hands. And firepower isn't enough. They demand elegance, as if there's anything elegant about a gun. If they had their way, Golden Guns would be standard issue. What a universe that would be. -Lord Shaxx

Having been trained in the way of the gunslinger. With his revolvers, a Gunslinger is almost like a supernatural being incapable of defeat. However, only surviving because he is tactful, he is smart enough to pick the right fights and usually can figure the stakes out in any combat before and while he fights them. With this skill, he is able to survive almost any situation..

Abilities: Dexterity is the quintessential skill for the Gunslingers techniques, adding to their deadly precision at range along with allowing them to better avoid incoming attacks. Charisma also allows the Gunslinger to better use their ability to judge and handle social situations and determine how to interact with those around them or simply by gathering information. Lastly Constitution gives the Gunslinger a better chance of seeing combat through if they should be engaged in close combat or targeted by destructive spells.

All of the following are class features of the Gunslinger.

Trial of Light: Gunslingers all must face a trial when they Gain thier light. They go out into the world and face challenges that few care to try. The results give the Gunslinger an extra Feat at first level.

Flanking Fire (Ex): Gunslingers are able to maneuver to their foes' sides and backs, and take advantage of the way this exposes these foes to attack. A Gunslingers ranged attacks count as melee attacks for the purposes of determining and awarding flanking bonuses.

Steady Aim: If a Gunslinger is granted the right conditions such as a clean shot of his target and a fraction more time, he is able to aim for vulnerable or exposed areas which will grant extra effectiveness to his attack.

Starting at 1st level, a Gunslinger may take a full-round action to gain extra damage as well as range upon using his firearm. Steady Aim acts like Sneak Attack, but only works with ranged weapons. Damage starts firstly at an extra 1d6 per attack and then increases every two levels of Gunslinger thereafter. The Gunslinger is considered to be flanking his target while using Steady Aim. As with a Sneak Attack, the extra damage dealt by Steady Aim is not multiplied on a critical hit.Steady Aim is useable with two ranged weapons so long as the Gunslinger is proficient with both weapons and takes into account the regular two-weapon fighting penalties.

Steady Aim does provoke an attack of opportunity. If an enemy is successful in scoring a direct hit on the Gunslinger while hes attempting Steady Aim, then the Gunslinger must succeed a Concentration Check of DC 10 + Damage Dealt or else lose extra damage granted by Steady Aim.

A Gunslinger with this selected feat may throw weapons at his full normal rate of attacks (much like a character with a bow).

Cheap Ammo: If a Gunslinger has ranks in either Craft (Gun) (Int) or Profession (Gunsmith) (Wis) he can craft ammunition (only for firearms) at one third the cost.

If you have selected this feat for hand crossbow or light crossbow, you may fire that weapon as many times in a full attack action as you could attack if you were using a bow.

Speed Bonus: At 3rd level, a Gunslinger gains an enhancement bonus to his base land speed, as shown on Table: The Gunslinger. A Gunslinger in armor other than light armor or carrying a medium or heavy load loses this extra speed bonus.

Golden Gun (Ex): Starting at 3rd level, a Gunslinger may summon a glowing gun of fire up tp 3 times perday the gun acts like a normal revolver, this shot is a guarenteed hit and deals 1d6 points of fire damage per caster level (maximum 10d6). This ability cannot be used in conjunction with a Sneak Attack, or similar ability.

Speed Loader (Ex): At 5th level, a Gunslinger has become so adept with his weapon that has taken the Rapid Reload feat with his gun that he may now reload it as a free action. However this does still provoke an attack of opportunity if the Gunslinger should reload in an an enemies threatened squares.

Incendiary Grenade: Starting at 5th level a Gunslinger can as a standard action usable once per round, may throw a small ball of fire with a rabge of 50ft it explodes on contact dealing 3d6 fire damage to target and 1d6 fire damage to everyone within 5ft of the target characters hit by this ability must make a reflex save of 15 or take an additional 1d6 fire damage next round.

Shot on the Run: At 6th level, a Gunslinger gains the Shot on the Run feat as a Bonus Feat even if he does not meet the prerequisite. When using the attack action with a ranged weapon, you can move both before and after the attack, provided that your total distance moved is not greater than your speed.

Improved Uncanny Dodge (Ex): A Gunslinger of 8th level or higher can no longer be flanked.

This defense denies another rogue - or class with similar ability - to sneak attack the character by flanking him, unless the attacker has at least four more rogue levels than the target does.

Finger Trick (Ex): At 9th level, a Gunslinger has become so adept with his weapon that has taken the Rapid Reload and Speed Loader feat with - that he may now reload two guns at the same time as a standard action. This does provoke an attack of opportunity if the Gunslinger should reload in an an enemies threatened squares.

Shot From the Hip: At 10th level, a Gunslinger may now make a ranged disarm attempt against his opponent as long as he is within the first range incriment of the Gunslinger's ranged weapon. The Gunslinger goes through all the steps as per instuctions of disarm.

Shot From the Hip does provoke an attack of opportunity as per a regular disarm attempt unless the Gunslinger has acquired the Improved Disarm feat.

Slug Shot: At 11th level, usable once per encounter as a swift action, a Gunslinger is able to deal massive amounts of damage by lining up that perfect shot. As a standard action a Gunslinger can deal 10d6 piercing damage to the chosen target as a ranged touch attack. The damage of Slug Shot remains unaffected by Steady Aim or Golden Gun and may not be used in conjunction with either for the same attack. If the bullet should hit an inanimate object of hardness greater than the respective hardness of the ammunition, then the shot will bury itself in the surface of the object.

Improved Golden Gun: At 12th level, a Gunslinger can pack that little bit more punch into his Golden Gun changing the former die sizes to d8's instead of d6's. This does not modify any other of the former rules for Golden Gun.

Flash of Insight (Ps): A Gunslinger's natural gift at locating targets improves his ability to notice other things as well. Starting at 12th level, he adds 1/2 his class level to Spot, Search, and Listen checks. As a psi-like ability, this is negated by effects that dispel or nullify psionics, but is always active, and never provokes attacks of opportunity.

Covering Fire (Ex): Starting from 13th level, Gunslingers can expend a move action to do nothing. Upon doing so, and until their next turn, they threaten attacks of opportunity with their ranged weapon out to 30 ft.

Gun Slinger: at 14th level, a Gunslinger is able to sheath weapons just as fast as he draws them. He may now sheath a weapon as a free action instead of as a move action.

Superior Finger Trick (Ex): At 15th level, a Gunslinger has become so adept with his weapon that has taken the Rapid Reload, Speed Loader, and Finger Trick feat with - that he may now reload two firearms at the same time as a free action. This does provoke an attack of opportunity if the Gunslinger should reload in an an enemies threatened squares.

Blast Shot: At 14th level, once per round as a standard action a Gunslinger can place a shot so precise and powerful that it sends the target flying off the ground. When hit with a Blast Shot the targe acts as if blown away.

Initally the creature will take regular damage from the shot with the exception that this too is nonlethal. Blast Shot does not provoke an attack of opportunity.

Deadly Slug shot: At 16th level, whenever a Gunslinger uses the Slug Shot class feature, this now pierces the first target and goes on to hit an addition number of targets along the line of effect equal to the Gunslingers Dexterity modifier. If the bullet should hit an inanimate object of hardness greater than 10 + the enhancement bonus granted to the ammunition, then the shot will bury itself in the surface of the object, this ability also grants the Gunslinger the last upgrade for the Slug Shot Feature, increasing to d10 this time.

Shootout (Ex): A Gunslinger's reflexes and skill increase his ability to fight effectively with his ranged weapon even at close quarters. Starting at 17th level, he no longer provokes attacks of opportunity for using ranged weapons in melee.

Lucky Shot: At 18th level, usable once per encounter as a swift action a Gunslinger can now rely on pure unadulterated luck to make his aim true, able to fire blindly in his opponent's general direction with nothing but a roll of the dice and faith in his trigger finger.

A Lucky Shot will aim for the closest hostile target to the Gunslinger regardless of cover or concealment but nonetheless an unbroken and unblocked line of effect must be drawn between the Gunslinger and the target or else another eligible target must be aquired.

The effects of a Lucky Shot can vary greatly according to the resulting d6 roll. The results are as follows:

Deadeye: at 18th level, a Gunslinger can now add his Charisma bonus to all extra die when using the Steady Aim ability. For example a 7th level Gunslinger with a +2 Charisma modifier can now deal 4d6+8 extra damage as a pose to the regular +4d6.

Leeching Lead At 20th level, a Gunslinger can now cause irreperable damage to his targets inner workings, causing them to bleed indefinitely both internally and externaly. From now on everytime a Gunslinger successfully shoots his target using Steady Aim he deals an extra 1d3 Constitution ability damage ontop of the extra damage granted by the Steady Aim class feature.

Gunbound: Gunslingers create a sort of bond with their weapons, much as a druid would have a bond with her animal companion, an Gunslinger can interact with his weapons on a deeper level then other characters. To achieve this bound the Gunslinger must have made the weapon he is bounding to and spend 24hours with his weapon. At the end of this period the Gunslinger must make a check 1d20+Gunslinger level (DC15) to successfully bound with the gun. This process will cost the gunslinger 250xp. The Gunslinger may bound with more then one weapon but the DC to do so increase by 5 with each successive gun and the experience cost increase by 50xp with each successive gun. When an Gunslinger has these bound weapons on him, he can achieve feats that he could not without, consult chart below.