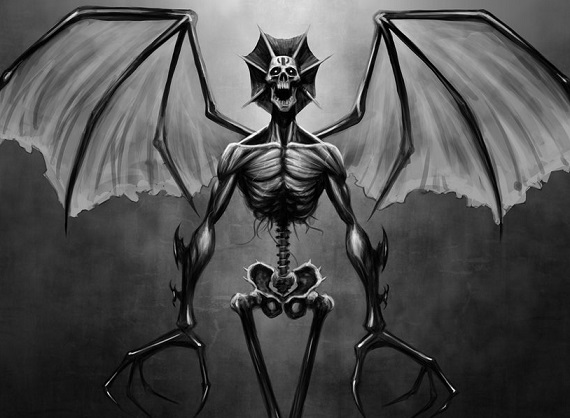 A large skeletal humanoid with large bat wings is in front of you, it seams to give off the chill of undeath.

Grave Hunters look like skeletal humanoids with big bat wings springing from their spine. Even though they are alive despite their appearance they are obsessed with undeath and necromancy. They would rather study death, undeath, and the undead to find newer ways to make undead. They commonly capture mortals to conduct experiments on them so they can find better ways to do what they do best make better undead. They have increased the power of any necromancer that has summoned them.

A Grave Hunter would rather fight at a distance then up close. They would rather send there undead troops them on their own.

Unholy Power (Su): A Grave Hunter adds its Charisma modifier as a luck bonus to it's attack and damage rolls with it's natural weapons.

Unholy Toughness (Ex): A Grave Hunter gains a bonus to it's hit points equal to it's Charisma modifier for each hit dice that it has

Skills: Grave Hunters have a +6 racial bonus on Listen and Spot checks.