In the days of Darkness, when the demon-kings rule the world, and humanity is forced to exil in the underground deeps, a new kind of defenders emerge from the blasted lands, harnessing the power of Gods, Dragons, and Demons alike against the demonkin. Those incommensurable combattants known as Godhands, sacrifice one of their arms to contain a deity immense power, and fight a bitter war in a world of demons.

A Godhand literally reaches out and grabs divine power for themselves. Either by way of curse, magical bindings, or other magic they seize power and sacrifice an arm to contain it. Divine power surging in an uncontrollable torrent they lash themselves to a power too large for them to fully utilize- like a man riding a storm to battle.

The binding that occurs, empowering and sacrificing a limb at the same time, is not always of their working.

Godhands may be born cursed with such an affliction and it only manifests when triggered by the need is meet. Others seek the power from other sources, accepting angelic spirits into their limbs with demonic magic worked by a greater demon, or playing host to dying demon for the sake of revenge. However, across the board there is the unifying notion of a lust for personal power- a consensual domination of the divine that makes godhands such renegades.

What is bound in their arm varies. Some are ambitious enough to bind a lesser Deity, a dying Great Wyrm, a very powerful Angel, maybe even a dead Demon-king, or some form of raw divine energy (perhaps a portion of a major deity’s power).

The long lost Alkavirian knowledge of Godhand's creation has been unearthed by a mysterious faction after the Great Defeat; and a few godhands have been seen recently.

People of the Shadows begin to hear about their powerful feats and see hope in those men and women ostrasized in past ages.

Easy recognizable with their dismorphic divine arm and their sacred tatoos acting as seals to prevent divine energy from flowing without control, those warriors roam the blasted lands and the shadows to seek an end to the demonic reign.

You can make a Godhand quickly by following these suggestions. First, Charisma should be your highest ability score, followed by Dexterity. Your next-highest score should be Constitution. Finally, choose the Folk Hero background.

As a Godhand you gain the following class features.

The godhand has bound some form of divine energy, presence, or being by sacrificing an arm. At 1st level the godhand must select the nature of the power bound in his new arm and what arm it is bound in (henceforth referred to as the “divine arm”). The godhand’s divine arm functions as a normal arm would (complete with appropriate slots) unless specially noted.

A godhand may bind either an evil or good aligned force into their divine arm. This does not need to reflect the godhand’s own alignment. Regardless of the alignment of the power bound in the godhand’s divine arm- it resents being bound there. Once these choices have been made they cannot be changed. A divine arm has two states; active and suppressed.

A suppressed divine arm functions like a normal arm and is considered an “undrawn” weapon (i.e it doesn’t threaten). It gains no benefits from being a divine arm in this state but the arm does not rebel (see the rebellion class feature).

An active divine arm gains all the benefits for being an divine arm but the arm rebels at the start of each round. Activating and suppressing a divine arm takes the same action as drawing or sheathing a weapon (allowing it to be used with feats like Quick Draw). When activating a divine arm, the godhand can have any morphologies he knows and wishes active upon activating it.

The arm has a very distinctive and clearly divine appearance reflecting the nature of the arm. It is often larger than the other arm, creating a visible asymmetry in the godhand’s silhouette. As they progress in level it becomes more lavish, much larger, and far more difficult to hide. It takes a DC 10 + godhand level Disguise check to disguise its appearance from a casual observer. A suppressed divine arm reduces the DC by 5 (so it is DC 5 + godhand level).

Your divine arm provide you divine protection. Beginning at 1st level, while you are wearing no armor and not wielding a shield, your AC equals 10 + your Dexterity modifier + your Charisma modifier.

At 1st level, your divine arm gives you mastery over a unique combat style that combine divine strikes and spellcasting in one move.

You gain the following benefits while you are unarmed: 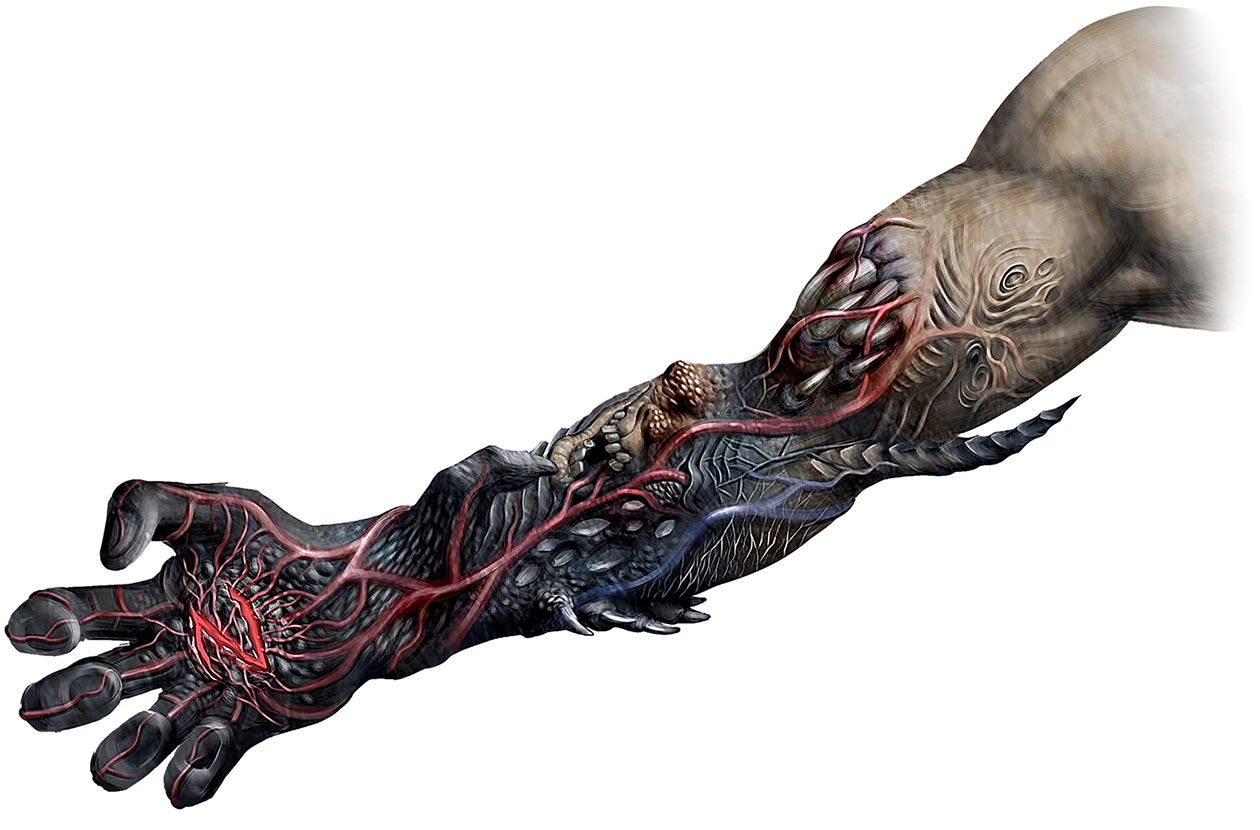 Starting at the 1st level, you can now harness the divine energy flowing within your arm. Awakening its true power. This Divine Potential can be used in many ways to enhance your abilities. Those powers are known as morphologies.You can change the Morphologies every time you have a short or long rest

As long as your divine arm is active you gain the benefits. Exemple:

Using your Godhand Base Damage, choose between bludgeonning, piercing, slashing Dmg, each rest while your divine arm is active, you can:

Protection from the elements

You cannot allocate more Divine Potential than twice your Proficiency bonus in one morphology. 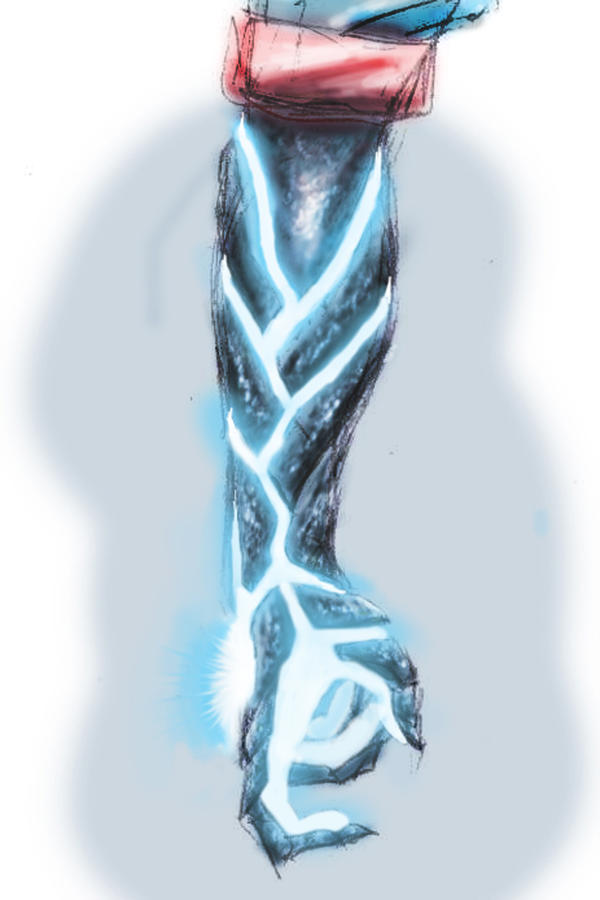 A godhand struggles against the raw torrent of power locked inside his arm. It’s too much for a mortal vessel to bear safely and this manifests in rebellions from it’s arm. At the start of each round when a divine arm is active, the godhand must make a Char save DC 8 + proficiency bonus).

All penalties last until the start of their next turn. The godhand may alternatively accept taking 1/2 his godhand level in damage (minimum 1 damage) to ignore this failed effect.

Roll a d8, and apply the result:

Starting at 2nd level a godhand can flood himself with the energy from his arm as a free action, breaking down the seals that bind the power in their arm slightly.

This flood of energy grants him a +1/2 godhand level (minimum +1) sacred or profane bonus (depending on the alignment of their divine arm) on attack rolls until the start of their next turn, but also gives a penalty equal to half the bonus granted on Char saves against rebellion on the following turn (minimum -1). You can use this feature once per short or long rest.

By the time you reach 2nd level, you have learned to use the divine magic power within your divine arm to cast spells. See chapter 10 of the Player's Handbook for the general rules of spellcasting and the end of the class description for the Godhand Spell List.

You have to have your divine arm active to cast spells. You do not have to prepare your spells.

The Godhand table shows how many spells slots you have to cast your spells of 1st level and higher. To cast one of these spells, you must expend a spell slot of the spell's level or higher. You regain all spell slots when you finish a long rest.

You know two 1st-level spells of your choice from the Godhand Spell list.

The Spells Known column of the Godhand table shows when you learn more godhand spells of your choice. Each of these spells must be of a level for which you have spell slots. For instance, when you reach 3rd level in this class, you can learn one new spell of 1st or 2nd level.

Additionally, when you gain a level in this class, you can choose one of the godhand spells you know and replace it with another spell from the godhand spell list, which also must be of a level for which you have spell slots.

Charisma is your spell casting modifier.

At 3rd level, the godhand’s divine arm gains a sacred or profane bonus (depending on the alignment of their divine arm) on damage rolls and spell damage equal to 1/4 their godhand level (rounded up) when striking and casting with their divine arm. This bonus stacks with that from overdrive.

Starting at 6th level, your unarmed strikes count as magical for the purpose of overcoming resistance and immunity to nonmagical attacks and damage.

At 9th level, a godhand gains a mastery over overdriving his divine arm. The penalty to your Charisma save against rebellion is reduced by 1/2 your Charisma modifier (rounded up) when you overdrive.

At 9th level, The divine power flowing within your arm helps protect you from many effects and illnesses.

You have advantage on all saving throws and you have resistance to poison damage. Your divine arm also gives you immunity to disease. Additionally, magic can’t put you to sleep.

At 20th level, The Godhand can finally fully tap into and control their divine arm. They no longer suffer rebellion checks and all of their arms become divine arms. You gain one extra Bonus Action that can be used like a normal bonus action.

Prerequisites. To qualify for multiclassing into the Godhand class, you must meet these prerequisites: Strength 13, Constitution 13, and Charisma 15

Proficiencies. When you multiclass into the Godhand class, you gain the following proficiencies: