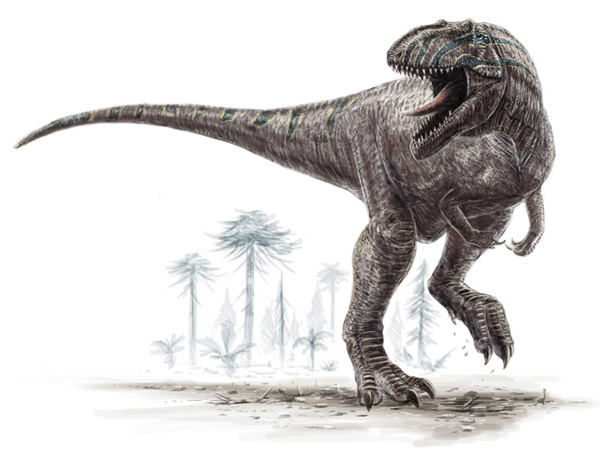 The gigantosaurus was a reptilian dinosaur that measured somewhere between 12.2 and 12.5 m (40-41 ft) in length, and between 5 and 6 tons in weight. Its skull is approximately six feet long, and filled with jagged teeth, Skin tones vary but are usually an earth tone, brown or green sometimes in combination as a form of camouflage Though on a male their would be bright colors on the face, usually a bright red, or almost neon green to show as a sign of his strength to a female he is trying to mate with.

A Giganotosaurus will turn to its side leaving itself usually exposed during a fight, the head sways back and forth due to a lack of depth perception. Often when fighting a single target he'll charge in and slam them with his hard skull, then begin biting at them and Consume them. However if he is attacked he will use his tail to lash targets behind him and to the side of his back, otherwise he'll use the head to slap targets aside.

The Giganotosaurus will not usually Bite a target unless he believes he is able to consume them without having to defend himself from other enemies, Often a Giganotosaurus will try to focus on a single target and take enemies out one by one, however his priority is defense, and Once bloodied he'll focus even more on defense than usual Roaring in an attempt to force his enemies and allow him to escape, Unless he is guarding something such as young, in which case he'll roar in an attempt to get the enemies to back off with fear, and rush in head on to kill anything he can.

DC 15: A Large creature known to fight off its own kind and defend its overwhelmingly sized territory from other predators.
DC 20: The Creature is adept in killing large pacts, but powerful in destroying other huge creatures, meaning that anyone attacking players should switch positions often and always keep moving.