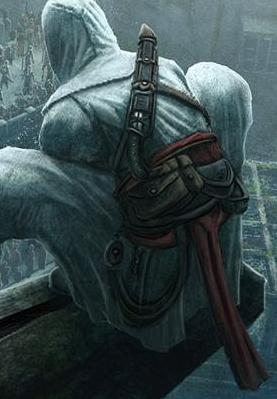 We are always watching...

The Free-Runners use not only their Strength, Dexterity, and Constitution, but depend on their Intelligence to use all of their physical attributes, using their mind to deduce the best possible way of doing something and doing it. From using their abilities to stop criminals to becoming the most dangerous assassins, they are truly a potent class, but also need to be played with intelligence and fearlessness.

Free-Runners specialize in moving through any terrain unhindered, escaping tough situations, and dealing with their opponents by jumping, dodging, and avoiding powerful blows before countering with swift, precise, but not necessarily strong blows, though they are certainly dangerous and sometimes deadly. Free-Runners are masters of gathering information and solving political puzzles. Though they are extremely rare, and never usually noticed, they are a very good class if you can use them properly. The main problem with the Free-Runners is that they do very little damage, and gain very few of their potent abilities at low level. If not played properly they will surely die before their true potential is seen.

Abilities - By far the Free-Runner's most important stat is their intelligence. They use a massive amount of skills and gain Bonuses from their Int modifier, next to that all of their physical stats, Str, Dex and Con, are the next most important, Runners need not to rely on the Cha or Wis as much, but high stats always benefit.

Races - The best races for Free-Runners are Human and Elf. Dwarves not so much, but not unheard of.

All of the following are class features of the Free-Runner.

Also, to learn or manifest Flash Jump, A Free-Runner must have an Intelligence score of at least 12 + the power’s level.


Tuned Muscles - The Free-Runner gets a +2 to Balance, Climb, Jump, and Tumble.

Evasion - On a successful Reflex save vs. damage e.g. Breath Weapon, you will take no damage instead of half, Improved Evasion makes it so you will only take half damage on a failed save.

Uncanny Dodge - Allows the player to keep their dex mod if they would normally be caught flatfooted or attacked by an Invisible attacker, Improved Uncanny Dodge allows a player to never be flanked, Or be victim to a sneak attack.

Attack on the Run - Free-Runners can make melee attacks or a melee Sneak attacks while moving, whether normally, through crowds, or at a Full Sprint. The damage of the sneak attack increases every 5 levels starting at +2d6 at 5 and ending with +12d6 at 30.

Flash Jump* (Su) - Free-Runners gain the ability to jump To a degree that rivals the Ninja, they gain the Supernatural ability to Flash Jump. This Allows them to make a Jump check and Jump to that degree of feet; Then make a second jump check at +5. For his/her Flash Jump, a magic/psionic disc forms underneath them after their jump height is maxed, and propels them even further. The level of flash jump determines the number of times a Runner can use this disc per jump, the first jump is the only one that counts per day, all jumps made after the initial Flash jump are free. Flash Jumping counts as a Movement action, Runners gain feather fall 10 feet per level of flash jump, Including level 0, 1st level Runners can use Flash Jump in dire circumstances(At the DM's Discretion).

Flash Jump - The first # is how many times you can Flash Jump after the initial disc. Flash Jump 10/Will means you can jump then make 11 Flash jumps as many times per day as you would like. Also the # of Flash Jumps that can be performed every jump is also the Number of Ft*10 that a Runner can Feather Fall.

Graceful Flight - After The Free-Runner makes a Full Flash Jump gains perfect flight in only a downward direction.

Human Free-Runners are the most common of this rare breed, mainly for the Humans' unrivalled potential for success. Human Runners usually use their skills in 1, 2, or all of 3 ways, Thievery, Scouting, or Assassination, though most of them are scouts for a specific nation or even Multiple nations or governments, there are the few that give the runners the popularity and infamous reputation.

Weapons - Short sword, Dagger, and Punching daggers are usually the weapons of choice, though some use the handaxe and kukri

Free-Runners are a class for more experienced players, They are going to be very survival oriented for the first few levels. The Free-Runners will never be the tank of the party, if anything they are the 'come from above' style sneak fighter. Free-Runners can be used for the hardest non-combat situations, they are usually ex-nobility, such as the 7th son of a noble, still nobility but abused by one's parents and Siblings. So they are skilled at keeping up false images and speaking the language of the snobby prude. They can also be used to learn secrets about both sides of a warring territory and sell them to the opposite sides just for the profit. Once they get to a higher level, however, the fun begins, crossclassing as a Ninja, Assassin, Shadow Dancer, or any other class you can think good for them, their abilities are very potent when cross mixed into the class stew.

Other Classes - Until a Free-Runner feels comfortable with the people they travel with, they will keep to themselves usually, every character is different, but the Free-Runners don't like anyone knowing who they are, seeing as they do tend to piss certain people off, usually from selling information to the wrong side.

Combat - Free-Runners usually attack from above or underneath, where most opponents are least armored and even less expecting an attack. Free-Runners are horrible melee attackers but amazing at Stealth and Assassination.

Advancement - Usually becoming a skilled Assassin or the most deadly Ninja, though they can be mixed with almost any class. Waiting to see a Free-Runner/Shadow Dancer combo.

Free-Runners are usually the corrupt politicians' back bone, the good King's advisor, or the crazy person that disappears as fast as you see them.

Daily Life - Free-Runners spend a good amount of time keeping up with contacts, or gathering any information they can, so they can learn about possible options or even the right bones to pick at when dealing with difficult contacts and positions.

Organizations - There are very few Free-Runners but most of them belong to either The Badgers Boots or The Wraiths Step. Both are powerful organizations with very powerful people connected to them, neither of them are Free-Runner only guilds, and both contain politicians, Warlords, and political advisors.