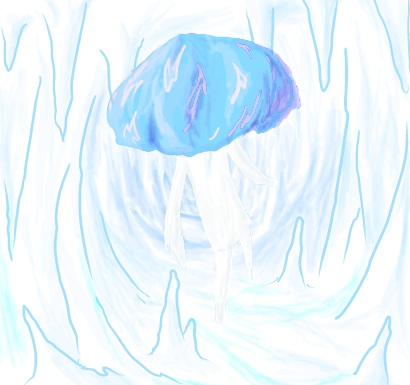 A fooling, found within an ice-covered cave.

"We have entered the unexplored ice caverns, and as we progressed deeper it became colder than the outside temperature, which is unusual. At the end of this cavern, we found giant blocks of ice, reflecting light to make the inner walls glisten and sparkle. As we approached the ice, we noticed that we weren't alone. The sparkling light revealed above us what we thought was part of the cave's icy decoration, which turned out to be ice creatures that took us for invaders."

Foolings are born from the coldest part of the nature. The top section looks like a jellyfish; it is a semi-transparent up-side-down cup with a sky blue coloring. From within the cup grows a small humanoid body that looks like it is made from powdered snow, and on the edge of the cup and from the body grows small, sharp icicles. Although this creature is roughly the size of a human, they are extremely light and can float around the cold air. They can be found anywhere, although anyone who finds one of these creatures are most likely in a field of ice and snow.

These creatures venture out during the day, drifting in the chilly air. They may find a group of adventurers, and will follow them slowly just to check out what the group is up to. After a while they get tired and drift away. At night, they return to their home cavern. They can tell if a creature is taking refuge, and will let them be as long as they stay away from their territorial ice blocks. Those who approach closer might get a warning of the freezing cold airs around them. If invaders won't back off with that, they will strike from the above with severe frigidity. If a creature taking refuge is under attack, these creature might come out from their territory to protect it.

Foolings speak Sylvan. Some rare individuals might vaguely understand another single language (most likely Common) as well, although they cannot speak it.

Foolings are usually peaceful creatures, floating around icy fields during the day, and hanging themselves from the top of a frigid cavern during the night. They keep blocks of ice in their caves to mark territories, which might end up with a quarrel with other creatures. If the foolings turns out as the victor, there will be a new ice block to further spread their territory.

UtterCold Bolt (Sp): Foolings can shoot energy of cold beyond cold. They can target any single creature within 120ft. to deal 3d6 cold damage. Reflex DC of 21 may half the damage, but this damage ignores the first 20 points of cold resistance. Creatures immune to cold take no damage, as usual. This ability needs 1d4+1 round to recharge.

Freeze Solid (Su): This ability can be used three times per day. With a successful touch attack(+4), foolings can trap 1 creature in solid ice. Any large or smaller creature is completely locked in a block of ice, but a creature that is huge or bigger is not affected. Creatures trapped in ice must make a DC25 Strength check to break out, or suffocate. They can hold breath for 1 round per point of Constitution. After that, they must make DC Constitution checks to continue holding the breath, starting at 10 and increasing by 1 for each previous success. When the creature fails the DC checks it starts to suffocate: unconscious at the first round, dying at the second round, and dead at the third round. The ice can be broken from the outside with a DC20 Strength check.

Freezing Aura (Su): Foolings are so cold that the air around them are always cold enought to freeze fluids and vapors. Within 10ft. of the fooling, creatures must make a DC18 fortitude save or become slowed and have -4 points of Dexterity damage for 1d4 round. While within this range, all metal objects are treated as if the chill metal spell is in effect.

Cold Absorb (Su): Foolings absorbs all damaging spells with the Cold descriptor cast at them, gaining hit points equal to the damage dealt. Any excess hit points, up to a maximum of twice its normal maximum hit points, are gained as temporary hit points, which disappear after 24 hours.

Coldgenerate (Ex): Foolings are feys of utter cold. When the temperature is below 25 degrees Celsius, a fooling can recover 5 points of hp per round. Also, foolings can recover 2 points of lost ability score per round, if they happen to lose any.

Vulnerability to Fire: Foolings takes half again as much (+50%) damage as normal from fire, regardless of whether a saving throw is allowed, or if the save is a success or failure.