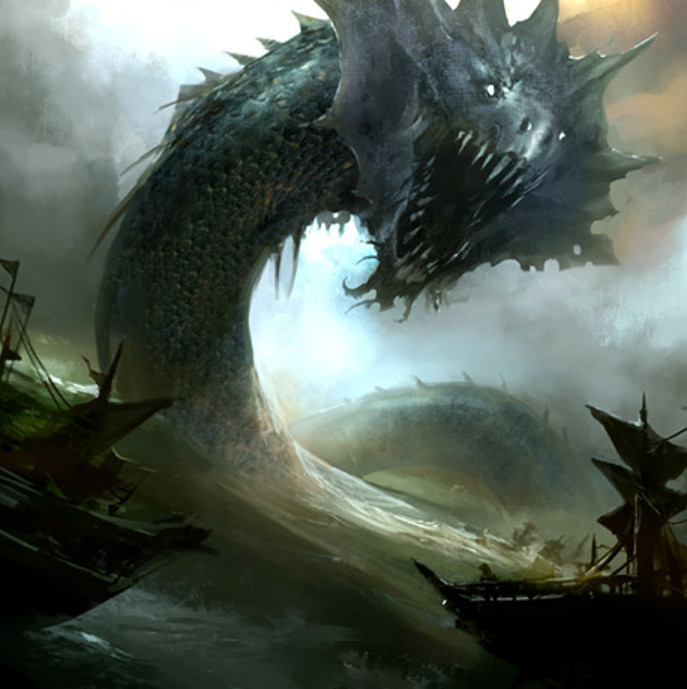 |thumb|300px|A sea serpent attacking out of the water. This small boat will soon become the home for many young sea serpents.]]

Sea serpents and young sea serpents are monsters that commonly feed on humanoids. If the navigation charts show missing boats, and sailors recall horrid tales about sea serpents terrorizing their seafaring lifestyles, then it is most certain the party will run into a sea serpent during their journey, or even one of their nests full with their young and old. They can live for centuries, and a single sea serpent's nest might have ships from eras ago, long thought vanished. Their nests also often have the treasures of their victims, but the sea serpents care little for such trinkets.

Massive green-scaled snakes that haunt the oceans, young sea serpents feed on entire schools of fish, and sometimes larger prey like sharks and whales. They rarely leave the water except to breathe, for in the water they feel most comfortable. They can grow to be absolutely titanic, but the young ones are still impressive in size, being larger than even the biggest of land snakes.

Fully grown sea serpents can be longer than ships, and they hunt massive prey. They have been known to attack ships, dragging them beneath the waves with their massive coils, and devouring entire crews in a single gulp, before dragging the husks away to build their nests.