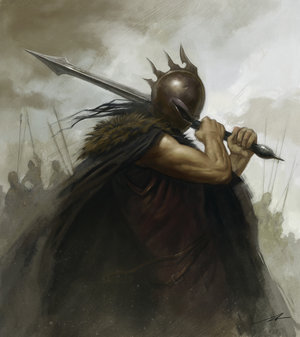 With the ability to manipulate their own weight, gravity warriors can quickly destroy their enemies in close combat and place themselves on the front line of any battle faster than the more traditional fighters can. At a young age, some individuals begin to manifest the ability to manipulate gravity, often in wild and uncontrollable ways. One of two paths becomes available to these individuals: either to suppress their abilities until they nearly vanish, or to embrace these powers and learn to harness them. The calling of the gravity warrior is for those that embrace the second option, allowing their innate abilities to bring them to new levels of power. Gravity warriors prove themselves to be formidable melee fighters.

"The weight of the world rests on my sword..."

Gravity warriors can be found in all walks of life. They can be found using their impressive strength to do something as mundane as plowing a field, to something as grand as defending a king. They may be seen leading warbands, or perhaps protecting a mighty forest. No matter how they choose to live their lives, gravity warriors are forces to be reckoned with. Gravity warriors are, for the most part, warriors to their core. As such they normally get along and work well with other warriors such as fighters and barbarians. Also, due to their connection with such an unexplainable force, gravity warriors can understand the thought processes of wizards and sorcerers and work alongside them well. Due to the gravity warriors' average hit die and lack of proficiency in heavy armor, they are not perfect for tanking. With their class abilities (like Leaden Weight, Impact, Great Leaden Weight and their speed bonus) they are nearly perfect candidates for eliminating specific enemies quickly, while their "hammer" class abilities allow them to deal damage to groups of enemies with a single attack.