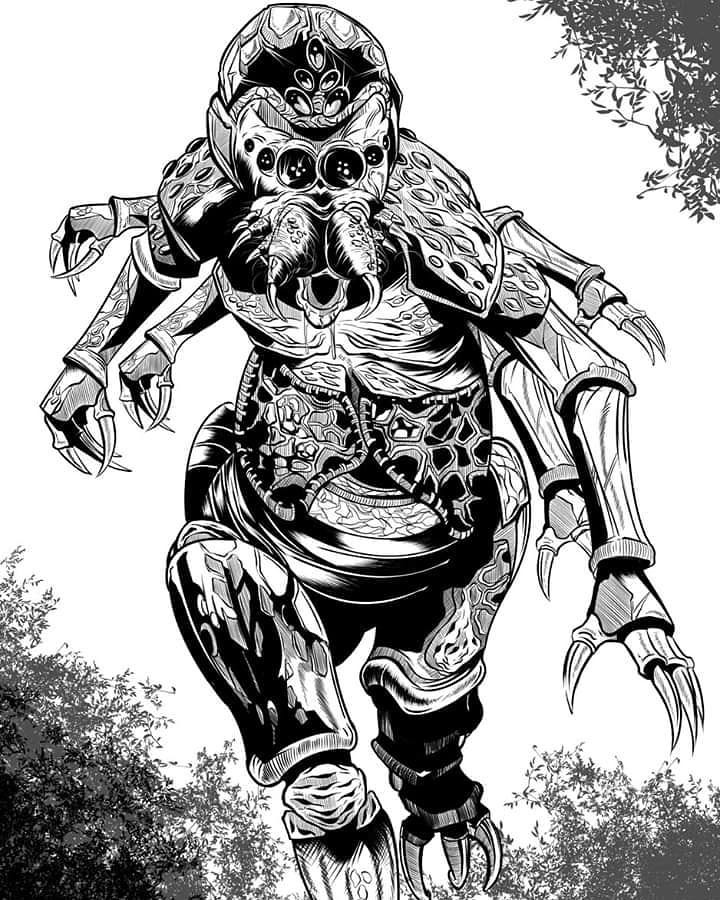 Most people believe ettercaps somehow evolved or were magically manipulated from arachnid stock, but their horrible origins in face occurred well outside of any natural order. Predictably, Drow experimentation is presumed in these beings' genesis, yet the worshipers of Lolth fervently and disgustedly deny the Spider Queen's involvement. The truth, however, lies less in external evils and more in the simple, willing corruption of what was once a pure intention of an ancient sect of druids.

One such fragment of ancient druidic lore mentions a secret cannibalistic tradition. These all-but-forgotten druids embraced vile aspects of nature, particularly the invasive and unkillable virtues of vermin. They indulged in increasingly arachnid practices. What began as living amongst webs and spiders turned into eating living spiders and imbibing venom, and finally taking demon-brewed infusion and adopting arachnid grafts. Eventually these fanatic druids gained a measure of kinship with the arachnids they revered. Thus, in a time long past, when a true humanoid spider came upon their ranks, the druids took its presence as the ultimate validation of nature, seeing the creature as prophet and embodiment that all they held sacred. Over time, these "perfect born" came to outnumber the humanoid numbers of their order, eventually replacing them entirely.

Having no need to attain a more arachnid state, the druidic traditions of their forebearers were abandoned and the new-formed ettercaps began to reproduce as natural. While the vast majority have since completely reverted to pure animal instinct, through proper upbringing some are able to reawaken the intellect and capacities of a human and even become quite successful in civilized society.

Ettercaps that choose to become adventurers must have a rare quality such as curiosity, better-than-low intelligence, a desire for companionship, a divine calling or some form of arcane influence. Ettercaps are hoarders and opportunists. A life beyond the nest may have started with interest in bits of equipment left from adventurers ensnared in their webs - the realization that blades can be wielded, that armor can protect. Given the same opportunities of a commoner of the realm, ettercaps are remarkably clean and well-maintained, grooming themselves often and repairing whatever clothes they may wear with their own durable thread. Ettercaps are not brave creatures - electing to utilize traps, attack from afar, or flee if it keeps them out of harm's way.

Due to their aberrant nature, ettercap physiology is somewhat fluid, with certain traits being more prominent in some regions than others. Ettercaps are bipedal with two to six long arms, flexible legs, and chitin covered in fine hair. With a stooping gait and hunched shoulders they are still around six feet tall. Their clawed hands have thumbs and three long fingers. Two large poisonous fangs protrude downwards from the sides of their human-like mouth, which is filled with sharp teeth meant for chewing flesh and cracking bone. They have a hollow proboscis-like tongue which they use to inject a digestive venom into their prey. At the base of their spine they have a silk gland like that of a spider. Ettercaps can exude a sweet smelling pheromone that commands lesser arachnids and lures adventurers alike. Their bodies are covered by tufts of thick, wiry, black hair, and their skin is dark and thick. Ettercaps' heads are spider or scorpionlike in shape with a pair of mandibles, and four to eight eyes, usually blood-red in color that gently glow in the dark.

Though usually only one ettercap is encountered at any time, on rare occasions a pair of ettercaps can be found together. The pairs encountered are always mated couples, though the female and male appear to be identical, females are often more intelligent and can move on to other mates if the male has died. Almost all ettercap adventurers and warlords are female. Ettercaps lay eggs that bear 30 to 80 offspring usually when a large - ideally alive - food source is acquired. Young born without a reliable food source may begin to cannibalize each other, and in turn may be cannibalized by the parents if food becomes scarce. Ettercap young are abandoned shortly after they are born, so adults are never encountered with young. After numbers have dwindled, the few remaining ettercaps part ways to claim nearby territory.

An ettercap eats any meat, regardless of the type of creature from which it comes. Upon capturing a victim, the ettercap poisons it so it cannot escape; once the creature is dead, the ettercap immediately devours as much of the corpse as possible. Typically, an ettercap can consume an entire deer or a large humanoid in a single sitting, attributing to their often seen distended stomach. Anything remaining after the ettercap has gorged itself is left for scavengers. As they age ettercaps get more nimble and hardy as their metabolism heightens, reaching a point where the meals they consume are no longer enough to sustain them, often causing death by rapid starvation. Elderly ettercaps can reach heights to nearly 8 feet tall and weigh over 600 pounds.

As a primitive race, they are not well liked amongst civilized communities. Tenacious and gregarious ettercaps eventually learn the common tongue and perhaps find a home in human settlements, where their silk-weaving skills are found to be useful. Ettercaps are very fond of spiders and other arachnids and often keep them as others keep bees. From time to time, however, an ettercap has a number of monstrous spiders as pets, which are as loyal to it as a dog to a human master. Ettercaps, especially feral, have an instinctual obligation to protect their spider familiars, often putting themselves at risk first to protect them and becoming enraged if they come to harm. Ettercaps are not aggressive toward other adult ettercaps so long as they do not infringe on one another's territory, and may even share food if no longer able to bear offspring.

Ettercaps are able to organize and will form makeshift militias between other ettercaps and arachnids to drive back and exterminate settlements that actively attack ettercaps or their pets. Aside from their spiders, ettercaps generally live alone (with the exception being an ettercap's mate) but will seek a new mate if their previous mate dies. Drow in particular harbor a particular contempt for ettercaps, steadfastly denying their association with Lolth and her dominion over arachnids having anything to do with the ettercap. This hatred may stem from an ancient truth or the simple jealous belief that ettercaps are closer to their own god's image of perfection than they will ever be.

Ettercaps are often Evil in nature, though it is common for ettercaps raised by humanoids to err towards the Neutral axis.

Ettercaps naturally have a life of solitude in the deepest parts of forests or caves, but urban environments like sewers and water channels are also common. They construct cocoon-like structures high in the treetops of the forest, obscured by the surrounding foliage. From the entrance to these lairs, ettercaps send long strands of web that connect the ettercap's home to the traps it has placed in the area and to the lairs of other arachnid creatures. Intelligent ettercaps may find villages that do not take offense to them and take up residence in a home, packing it tight with web and possessions.

Ettercaps believe that life and death serve as the only real, tangible truths, and thus do not recognize any deities or other moral codes. Religion and higher thought do not put victims in the web. Intelligent ettercaps may see Lolth as a patron god of their race, with fanatics believing they are an avatar of Lolth herself, much to the chagrin of the Drow. Others devote their faithfulness to the demon prince Miska the Wolf-Spider.

Though able to vocalize, ettercaps do not have a formal language. They express themselves through a combination of high-pitched chittering noises, shrieks, and body language. Despite their isolationist attitude they have the capacity to speak common, which is often referred to by their kind as "The Old Tongue", possibly referencing the language that their ancestors used to speak. Bits of Common may be learned if their den is close enough to organize society but only an ettercap raised among humanoids would be able to speak it fluently.