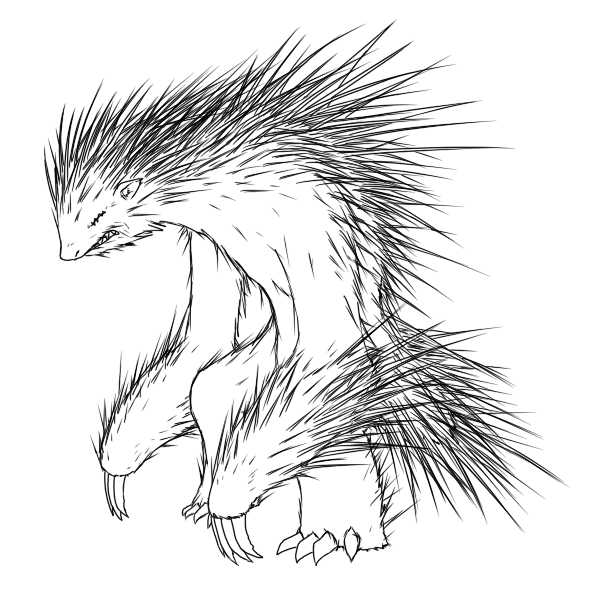 An illustration of an erythropine, based on the description.

Stalking through a labyrinth of hallways, it makes rattling noise as it slowly carries its massive body on its two feet. A creature seeming roughly like a large lycanthrope, its body is covered with black quills dripping with blood. It shows its dagger-like fangs sneering below its sown eyes, and swings its arms equipped with long claws and the same quills that cover its body.

Erythropines exist to pursue a small number of target(s) for as long as they must. They are not the fastest, but they are one of the most stubborn, for they will continue to follow the target no matter how long it takes. From the plane it originated, they were sent all over the multiverse. Thus, all planes of the multiverse is potential home ground for them. They are usually obedient servants to their master, otherwise they just roam around looking for any victim that crosses its path.

Erythropine closely resembles a crossbreed of a porcupine and a humanoid creature in shape. It has huge claws and sharp teeth like that of a carnivore. Its eyes are sewn shut for their creator's amusement, but it makes up for its blindness with its superior sense of hearing, smell, and touch. Its entire body is covered with quills, some as long as several feet, all dripping with blood. It has several vampire-like traits, such as fast healing and blood drain. It can also drain blood through its quills, unlike other vampires. Although these quills detach from the body easily, they quickly regrow almost as soon as it looses them, so it is never without its quills.

Stretched out, the erythropine is approximately 12 feet long, although it is usually somewhat bent over. Its fleshy arms are over-sized, extending about 8 feet by itself. Its claws add an additional feet of reach, making it a devastating weapon. Despite of its appearance, it is very nimble as it can open doors and hold objects. It also has some 5 feet between its shoulders and its head, giving it an unexpected reach with its bite. Its legs are short, which makes it a slow walker, but together with its arms it can swim through water or cling onto vertical walls. The massive creature weighs approximately 2 tons. Although these creatures are thought to be smart enough to converse verbally, they almost never do so.

Its tactics are simple. It follows the scent of its target until she is exhausted or trapped, then take a swing at her until one of the attack manages to inflict wound on the target. If it manages to catch its target, it gives a deadly embrace that eventually kills her. Only when it is severely outnumbered will it curl up.

Blood Drain (Ex): An erythropine can suck blood from a victim anytime it hits with an attack using natural weapons, using its vampiric quills. It drains blood, dealing 1d4 points of Constitution drain. On each such successful blood drain, it gains 5 temporary hit points. Although plant creatures do not have blood, erythropines benefit from absorbing fluids from them as well. It deals 1d2 points of Constitution drain and gains 5 temporary hit points.

Improved Grab (Ex): To use this ability, an erythropine must hit with a claw attack. It can then attempt to start a grapple as a free action without provoking an attack of opportunity. While the victim is grappled, it deals 2d4 points of Constitution drain and gains 10 temporary hit points due to blood drain; the victim is skewered by its vampiric quills.

Vampiric Quills (Ex): An erythropine's attack always deal piercing damage. After it succeeds with an attack, 1d6 quills break off in the opponent's flesh, which deals 1 point of damage per quills each round and imposes penalty on attacks, saves, and checks equal to the number of quills embedded in the body. Creatures that grab or grapple erythropines are stabbed all over. Huge creatures and smaller has 2d6 quills embedded. The amount of quills that gets embedded stacks. The quills can be removed with a DC 24 Heal check; the number of quills removed is equal to the amount of the score over 24.

Curl (Ex): An erythropine can curl up in a ball, guarding itself on all sides with its quills. While in this stance, it can only move at half speed, but it gains +4 bonus to AC. Against an opponent that makes an attack against it, it gets to thrash at the opponent. He or she must make a DC24 reflex save or be stabbed with vampiric quills.

Spider Climb (Ex): An erythropine can climb sheer surfaces as though with a spider climb spell.

Fast Healing (Ex): An erythropine heals 5 points of damage each round so long as it has at least 1 hit point. If reduced to 0 hit points in combat, it falls dead. Holy water can cancel this fast healing for 1d4+1 rounds.

Blindsight (Ex): An erythropine can locate creatures within 60 feet by nonvisual means (mostly hearing and scent, but also by noticing vibration and other environmental clues). The presence of false, powerful odors ruins this ability.

Vulnerable to Sunlight (Ex):Erythropines are vulnerable to sunlight. While its entire body is exposed to sunlight, it takes 4d10 points of damage per round.