Elementals are born from the raw essence of the Elemental Chaos. In keeping with the plane's wild nature, elementals come in a near infinite variety of shapes, sizes, and behaviors. Some epitomize a single element, such as fire, while others combine two or more into a deadly fusion of power. Most elementals are sentient to some degree, but some are little more than exotic beasts. 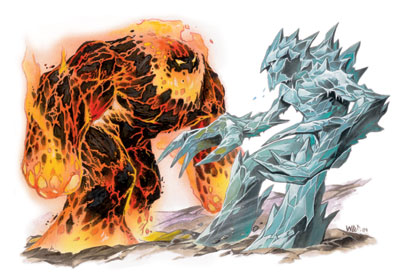 A frostblade progenitor (right), with several glacial spikes on its head and back.

Frostblade progenitors are creatures of raw ice. Their bodies are covered with spiky protrusions which are actually entirely separate, semi-parasitic creatures known as glacial spikes. These lesser elementals feed off of the heat of the frostblade's victims; in exchange, they help defend the progenitor against foes that it is not able to defeat by itself. These parasites, coupled with the frostblade progenitor's own arsenal of deadly abilities, make it a feared predator of the icy wastes.

A frostblade progenitor begins combat by using frostspear against the largest group of enemies, moving into melee range, and then following up with hypothermia the next round. It makes frostblade attacks against the closest enemy until its other abilities recharge, then seeks to withdraw from melee and repeat the strategy. Once it is bloodied, the progenitor remains in melee at all times to make good use of its icy fury ability. It will use glacial genesis whenever one of its spikes is killed.

DC 20: Frostblade progenitors are elementals of ice that sometimes wander into the arctic regions of the world. They are predatory creatures and, while sentient, act much like any hunting animal in their pursuit of prey.

DC 25: Covering the frostblade progenitor are several parasitic creatures known as glacial spikes. These creatures protect the frostblade, whom they depend upon in order to acquire sustenance. 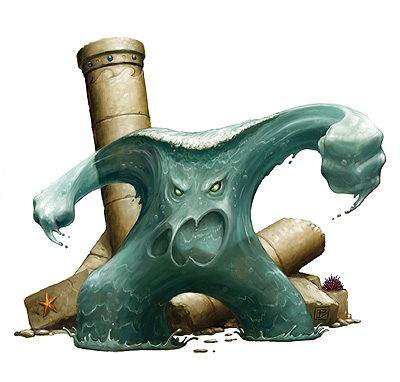 A boiling mass of water is a difficult foe to face.

Firecrest typhoons are entities that embody both fire and water. Its body is composed of water, but the liquid constantly boils and churns within the creature's form. A firecrest typhoon's form is approximately humanoid, with two "limbs" serving as legs and another two as arms, but it can shift its body into almost any shape. These creatures are always accompanied by the angry hiss of boiling water.

A firecrest typhoon has no preference towards either melee or ranged combat, but most of its abilities push foes away or knock them down, so it usually winds up depending on inferno geyser to strike most foes. It uses scalding tsunami early in the fight, when it can most afford to lose some of its mobility. While sustaining the tsunami, it prefers to use its remaining actions to move closer to foes so it can catch as many of them as possible in its area. If foes are already within range, it uses boiling fist against the nearest one.

DC 20: Firecrest typhoons embody churning waves and blistering heat. Its body is a boiling mass of water that steams and sizzles.

DC 25: A firecrest typhoon's main advantage is its ability to repeatedly knock foes down, or push them away from itself. It can most easily be taken down from long range. 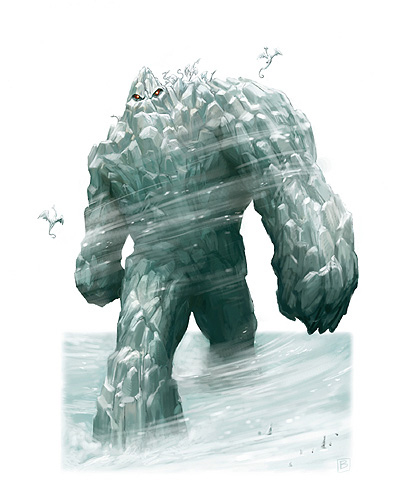 The sight of a riled rockcap glacier is not one many live to tell about.

Rockcap glaciers are ancient entities that have existed at least since the fallen giant empires spanned the world. They are universally dull and brutish creatures, but they take great offense to any suggestions that their intelligence is less than stellar. Rockcaps are typically uninterested in the events around them, almost to the point of being apathetic. Once angered, however, a rockcap glacier is a nigh unstoppable engine of destruction that will not rest until everything around it has been leveled to the ground.

A rockcap glacier makes frozen comet attacks against enemies, waiting for them to come to it. It relies on its glacial sheet aura to give it an advantage in close combat, where it uses frostshatter strike every round. If fighting with allied creatures, it typically saves chill of winter until it can catch the ally and one or more enemies in the blast. Once bloodied, rockcap glaciers prefer to move out of melee combat and use frozen comets to harry opponents from a distance.

DC 25: Rockcap glaciers are immensely powerful elementals of rock and ice. They are typically only found in the coldest reaches of the Elemental Chaos.

DC 30: When roused, a single rockcap glacier has been known to destroy entire armies by itself. They can rain down icy oulders that crush their foes, and their very presence chills creatures to the bone.