Also known as gray dwarves, duergar are repulsive relatives of the dwarven race. They greatly resemble their dwarf cousins, but they stand slightly taller on average and tend to weigh more. Their skin is grey or pale white, with the darkest possessed of skin that seems almost ebon in hue. Their eyes are equally dull, with any shade of grey or brown being the norm. The vast majority of duergar are naturally bald, including the females, and those that aren't often shave off their hair anyway, it being viewed as nothing more than a detriment in combat.

The duergar are goal-oriented and adhere strictly to their hierarchical society, though its exact structure can change drastically over time. An individual's standing within the community is greatly influenced by his battle prowess and, most importantly, the number of foes he has slain in combat. Their culture is bland and lacking in traditions, owing in part to their exceedingly strict militaristic lifestyle. To a duergar, anything that does not directly contribute to its own survival or power is nothing more than a useless trinket. Accordingly, they have no appreciation of artistic expression, and their dwellings are roughly hewed from stone and furnished with the sparsest of accommodations.

They toil daily under the unending watch of Laduguer, their cruel and joyless deity, who demands that the duergar be prepared against any possible threat; to let your guard down for even a moment is to welcome death. It is Laduguer who freed the duergar and the dwarves form the giants, so he claims, and that the ungrateful dwarves repaid their debt by turning their backs to him and his people. As retribution for their sacrilege, he demands that the duergar slay dwarves whenever they can and urges his people to annihilate all others who stand before them: in Laduguer's eyes, mercy is weakness, and weakness is punishable by death.

For duergar as a playable race, see Duergar (4e Race). 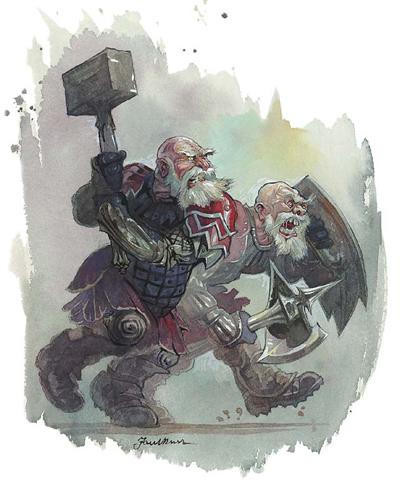 Duergar warriors are among the most feared combatants in the Underdark.

Unlike most duergar, who can simply alter the size of their bodies, infiltrators can completely change their physical appearance. They are often the first line of attack in a duergar invasion: an infiltrator can be sent into an enemy city totally undetected while it learns the position of enemy troops and fortifications.

Duergar infiltrators prefer to assume a harmless guise using change shape in order to get close to their intended victims - they usually take the form of a child or elderly individual and pretend to need the assistance of their target. Once it is in melee range, the infiltrator begins using deceptive strike as often as it can. If they are unable to gain the upper hand in combat, they use change shape to take the form of one of their targets while in close combat to confuse the victim's allies. If that fails, it attempts to slip quietly into the shadows.

Titans use their immense strength to wield ridiculously oversized weapons that can crush their foes in a single swing. Though their massive weapons do slow them down a bit and they are far less disciplined than most of their kin, duergar titans can strike at foes form a surprising distance and their singular lust for combat lets them shrug off injuries that would cripple lesser creatures.

Duergar titans wade into combat with wild abandon, swinging at the closest foes with its oversized maul. If there are natural hazards or traps present on the battlefield, titans aren't above knocking their foes into them. They use expansion as soon as possible after being bloodied, relishing the physical power that it brings them.

DC 15: Duergar are vile relatives of the dwarves. They can alter the size of their bodies, and they are among the most feared races of the Underdark, noted for their cruelty and battle prowess.