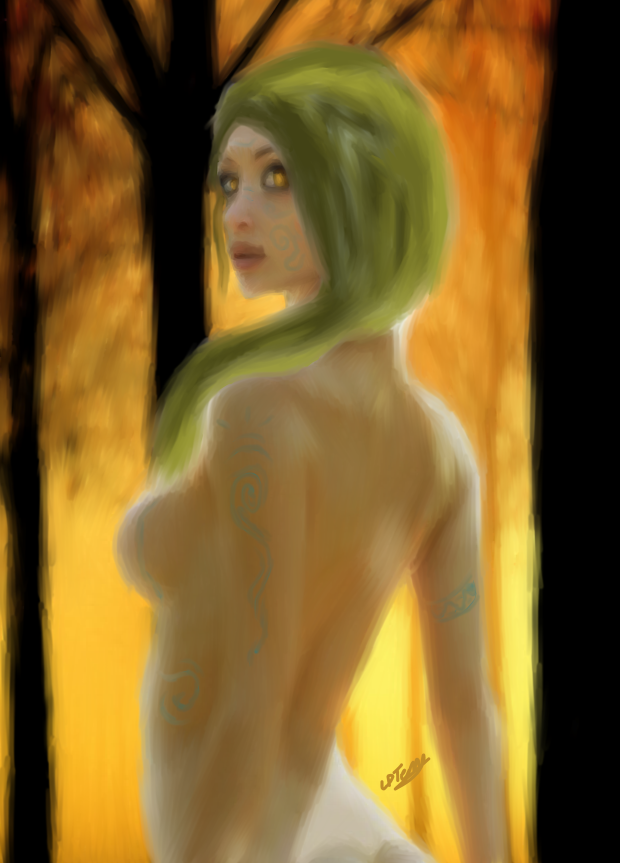 A Dryad strolling the Mori at sunset.

Dryads of Yagure Mori are often bold, mischievous and light hearted. They live with the animals and spirits of the forest. Residing in the forest they understand little of laws and rules, this is regularly displayed in the form of tricking townsfolk and taunting animals. Since this species of Dryad are only found within one forest, they are not well known by other races of the Island or elsewhere, this means that they usually get mistaken for exceptionally pretty foreign female humans. A Dryad of the Mori’s main aim is to have fun and enjoy their short life. They tend to have a love for nature and a strong desire to be around animals.

Dryads are tall in height standing an elegant 6 to 7 feet tall. The Dryad has a slender and beautiful appearance that resembles a humanoid female. The skin is firm and can come in many colours ranging from white, to grassy greens, barky browns and even jet black. They often have flaunt beautiful hair that is often one of the many shades found in nature. In their forest home the Dryads are often mistaken for angels that come to aid lost travellers within the nightmarish Yagure Mori.

Born from the trees of the forest that move around at night, the Dryads themselves are incapable of reproducing, their purpose is a mystery. With beautiful bodies that most humanoid men desire and an elegance that make most women green with envy, it is believed that the Dryads of Yagure Mori were actually created by the forest spirits to taunt and manipulate the lost even further.

The Dryads posess larger eyes than that of a standard human. They are glassy in appearance and bright green, hazel or brown in colour. They often wear very little or nothing at all, however the few that venture outside of the forest, usually steal other humanoids clothes or make their own out of weaving plants and leaves together.

Dryads weigh about a quarter less than a human female. They are born fully formed and do not seem to age, usually possessing a life span of about thirty years.

Dryads ignore the other Dryads in their community, they have no attachment to one another at all. Local observers wonder if the Dryads can see each other. The only attachments and relations that the Dryads of Yagure Mori posses are with the animals and plants that surround them. Often adopting an animal companion or two the Dryads make great druids or rangers. Like everything in the Mori they are used to the evil spirits that parade around in the night, therefore they do not provoke them and in return do not get attacked.

As far as relations with other races go, the Dryads only interact with those that come into the forest. The Dryads that leave the forest are in the minority and often manage to pass as human females. This means that there are no relations between the Dryads and any other race.

The Dryads of Yagure Mori are usually chaotic neutral. Follow no rules, often playful and mischievous they are free souls in the open forest.

All of the Yagure Mori Dryads come from the Yagure Mori forest. In daylight it is beautiful, surrounded by vibrant trees and magical fruit and many adorable animals, a forest anyone would be warmed by even the stoniest, most hateful adventurer. At night it turns into a sinister spirit filled prison that preys on those who happen to be wandering through. Powerful malevolent evil is often encountered, the trees and ground shift making it almost impossible for anyone to find out what direction they came from and where they are going.

Even though this is a deadly environment for most living creatures, the Dryads are neither confused or shocked by anything that happens within the forest's boundaries and this hardens them to the outside world. They spend most of their time with the spirit creatures at night and in the day many animals.

The only thing the Dryads worship is the forest that gave birth to them. Even if they leave they will always be drawn towards the Yagure Mori.

All Dryads speak Spirit Tongue and most learn other languages of the races they encounter. This means that most only learn common, sylvan and draconic (from the Whiskered Kobolds)

Dryads of the Yagure Mori adopt names if they are trying to fit in with the outside world, otherwise they remain nameless.