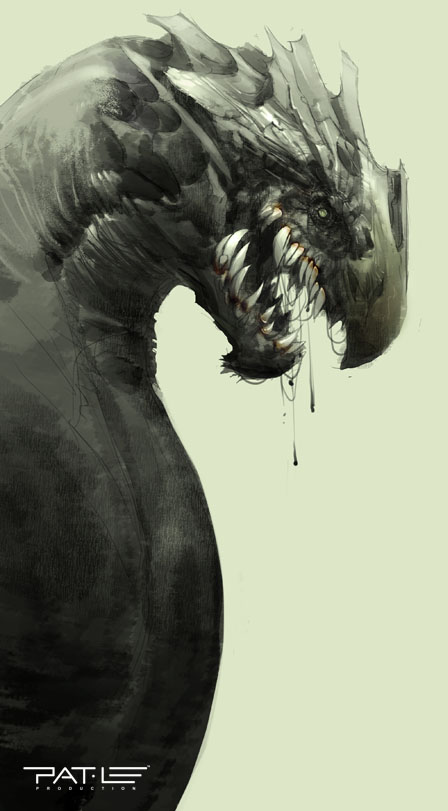 An unbearable stench fills the air, and the earth seems to tremble as a reptilian beast rises from underneath the soil, it's body covered in boils and running sores, a long trail of putrid fluid dangling from it's wicked looking mouth. It's dark eyes stare at you for a moment before it lunges, it's rotting jaw opened wide

A dreg dragon is a dragon whose body begins to rot and fester upon birth. The dragon can survive in this condition due to the fact that their vital organs are kept isolated and healthy while their muscle tissue and scales fill with disease, a racing immune system keeping their flesh just alive enough to keep them strong.

A dreg dragons scales are about the size of a mans hand, spade shaped, and have a range in color from a dull, faded black to a full, rich green. The actual color of the scales is usually intelligible due to the fact that most are covered in moss or faded and rotting away. The exact reason a dreg dragons body is in a state of perpetual rot is unknown, though it is believed to be mainly due to magical tampering with the bodies of dreg dragons during ancient times.

Dreg dragons are actually rather civil creatures when they speak to either other dreg dragons, or creatures that live nearby it's home. The dragon will still attack a familiar being if doing so suits it's purposes, but they will tend to be calm otherwise.

Dreg dragons seem to be rather sensitive to magical auras, seeming to almost be unknowingly soothed by them. A dreg dragon will collect magical artifacts and horde them through the years, along with coins and gems that have been carried by wizards or sorcerers through the years.

A dreg dragon will tend to shun combat unless they are hungry or being irritated by something. Dreg dragons have an extremely short temper and may attack someone if they so much as speak out of turn. If the dreg dragon plans for combat then they will usually burrow just a few feet underneath the ground and wait for their quarry to pass nearby, at which point in time they will burst up, out of the ground, and strike. Dreg dragons are fond of using repulsion to keep their enemies at bay while they attack with their acid breathe attack to whittle them down. If a dreg dragon begins to lose combat then they will use a combination of Stinking cloud and repulsion to drive their enemies as far away as possible before fleeing.

Breath Weapon (Su): A dreg dragon has two types of breath weapon, a line of acid and a cone of poisonous gas. Creatures within the cone must succeed on a Fortitude save or take 1d6 plus 1 per age category of the dragon points of Str damage.

Rotting Body: A dreg dragons body is in a state of perpetual rot, making them extremely difficult to harm. Due to this fact a dreg dragon is not at risk of death from massive damage and is immune to nonlethal damage unless the source landed a critical hit.

Stinking cloud (Sp): Three times per day a juvenile or older dreg dragon can use this ability as the spell of the same name except that the dreg dragon is not subject to the effect of the fumes of the spell.

Sometimes the situation arises that a dreg dragon and another being have a child. These rare children tend to take after their dragon parents in their personality, being short of temper yet calm and intelligent at the same time. A dreg half-dragon will look very similar to their non-dragon parent, the only changes being that they will be covered in small scales that appear similar to the parent dreg dragons scales, their facial features will appear rather reptilian, and their body will be ridden with disease. A dreg half-dragon has the following changes to their stats in addition to the other stats gained from the half-dragon template:

Special Qualities: A dreg half-dragon has all the special qualities of the non-dragon parent, plus the following: