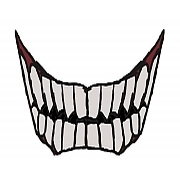 A gaping smile against a white background.


He is the patron deity of betrayal, cruelty, insanity, knowledge, madness, and treachery.

Diirinka is he who possesses the perfect insanity, the great savant, the cruel master, and the deep lich. His worshipers are composed of derro, assassins, and torturers. Followers of Diirinka do not undergo any formal training. Each group of followers establishes its own guidelines that potential priests must meet, most of which are completely arbitrary and impossible to pass. The true purpose of these guidelines is to break the would-be priest both mentally and physically— if the priest survives the ordeal, which can sometimes last months, he is welcomed into the order. Outsiders refer to followers of Diirinka collectively as the touched cult, a name that they seem to have adopted. Clerics who worship Diirinka may select the Diirinka's Hideous Laughter feat, regardless of whether they are part of an official order or not.

He resides within the Abyss. Diirinka has few established temples— and they have no unifying traits. Most shrines are simply piles of victims who have been sacrificed in his name, each branded with the image of one or more gaping smiles. Commonly known as pyramids of sacrifice, these corpse piles are left until they either rot or are consumed by scavengers. Some pyramids can completely fill small cavern chambers, and the stench they cause can carry for miles. Pyramids of this size are fortunately rare, as followers of Diirinka prefer to move frequently in order to avoid detection.

He is often attributed with creating the derro, and they compose the majority of his worshipers. Few who lay eyes on Diirinka would suspect that he is a deity. He wears simple, tattered clothing, and his overall appearance is that of an individual who has seen much better days. This appearance is deceptive, however, as Diirinka’s power and cruelty cannot be overstated. He has been known to torture creatures for centuries at a time simply to see how they react. Rumors claim that Diirinka once had a brother named Diinkarazan but that he had him locked away in the deepest bowels of the Abyss.

Diirinka is utterly insane, often spending days at a time in some dark cavern simply rambling on about utter nonsense. From these indecipherable conversations with himself it is said that Diirinka learns all there is to know about the universe and everything in it. It is rumored that he can even predict events that have not yet come to pass with perfect accuracy. Most believe that Diirinka can somehow "listen" to the very fabric of the Far Realm and that his thoughts are inexplicably tied to that horrible plane.

The visions Diirinka sends to his faithful are purposefully cryptic and nearly indecipherable. They are just as likely to contain a dire warning as they are to be completely useless, with no apparent difference between the two. By his reasoning, true believers are expected to be able to understand the madness without comprehending it, a paradox that few outside his order seem to be able to figure out. Of these many visions, Diirinka's followers have put together the following tenets:

The quests Diirinka sends his followers on are pointless and sometimes suicidal. He might send a lone cleric into the heart of an enemy city to retrieve an utterly unremarkable flower pot, or have a group of devout worshipers sit atop a mountain peak completely naked while reciting poetry in Dwarven. A common legend claims that Diirinka once sent his most fervent cleric into the heart of the Abyss and commanded her to kiss Yeenoghu; to the priest's credit, the story goes that she managed to get within sight of Yeenoghu before the Demon Prince of Gnolls tore her head from her body and added it to his throne.

Prayers to Diirinka are offered in the form of sacrifices, coupled with a long list of all the important deeds the priest has recently performed in the name of the Great Savant. In order for a sacrifice to be considered worthy, the victim must first be tortured for a period of at least one hour, but a priest is more likely to receive Diirinka's favor if he tortures his victim for even longer periods: the most extravagant offerings can last for weeks. Just before the victim is killed, his body is branded with hundreds of gaping smiles, the holy symbol of Diirinka. The typical method of finishing a prepared sacrifice is to cut the victim’s throat with a ceremonial dagger, but some priests prefer a more brutal execution.

Diirinka has no chosen heralds, but his followers believe gibbering beasts to be a sign of his favor. Powerful clerics of Diirinka sometimes summon them into this world, not even bothering to try to control the unpredictable creatures. Instead, they simply let the gibbering beast do what it does best: wreak havoc on everything around it (possibly including the priest himself). Some priests even believe that they are able to understand the nonsensical phrases of the gibbering beasts, claiming that Diirinka speaks through the garbled words to those willing to listen. Whether there is some truth to these claims or if the priests have simply spent too much time pondering unthinkable thoughts is unknown.

Torog, because of his passion for torture, sees Diirinka as a kindred spirit, though to call the two allies is perhaps a bit of a stretch. They share many spheres of influence, and their clergies sometimes work together for short periods, but for the most part, they leave each other alone. Some believe that Diirinka and Vecna may possess a secret alliance, though proving that the Whispered One is involved in anything is a feat in and of itself. Those who believe in this partnership often speculate that Diirinka's insanity allows him to know things that even great Vecna could not otherwise find out, but that Diirinka does not understand the importance of his own mad rambling.