This creature stands on two powerful hind legs. It has a long tail, but no other limbs, and a gray, pebbly hide with daggerlike markings. It's narrow head is equipped with a sucking mouth and a tubelike orifice in it's forehead. A digester stands about 5 feet tall and is 7 feet long from snout to tail. It weighs about 350 lbs. 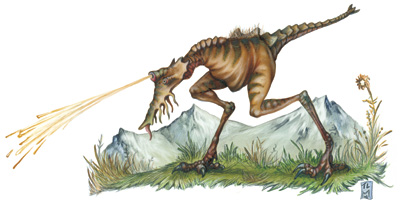 Digesters often hunt in the dark, when prey is discovered they use their Acid Jet and then charge in to make use of their Acid Spray. If these initial attacks are insufficient to kill the prey they will attempt to withdraw and make use of their acid attacks again as soon as possible. If forced into close combat they attack with their hind feet until able to spray acid again. Digesters always attempt to stay at a distance from their prey making use of their attacks and fleeing harm.

DC 15: Digesters are pack hunters, that launch gouts of acid at potential prey while attempting to maintain a safe distance from enemies. This acid can reduce a human to a pool of glop in seconds.

DC 20: A digester is a hunting and eating machine. When not hungry (which is rarely), they lie low and avoid most other creatures. Digesters feed by sucking up the melted remains of their victims.

Digesters live and hunt in small family groups of about 3-5 members. They lurk anywhere there is prey to be found, from barren deserts to steaming jungles. As they consider almost all animals food few creatures will attempt to train and use them as allies, although there have been instances where these monsters have been domesticated.