Some do not speak, some cannot shut up. This group of strange warriors have been within our shadow for a long time, but I see no evil deeds from them. As I have seen it, they hunt everything otherworldly and fiendish. ~ Unknown

A weakened man walks through the crowded market, bumping into almost everyone, his eyes black as death and his steps silent. All of a sudden, this man turns into a fiend, screaming out its lungs, stunning everyone around. Guards attempt to take down the beast, but they are too weak to do so and are defeated in an one sided battle. As the battle calms down, another man slowly walks towards the fiend, not being phased by its power. The fiend rushes the man and within the second of guards being in shock of this man appearing out of nowhere and being attacked at the same time, the battle is over. A small silhouette of his hands moving through thin air seemed to obliterate the beast at the spot where it attacked. The man looked around; and seeing that no one is in danger, he moved on, not to be seen again.

Devil Hunters are people (any humanoid, really) who have been fiend scarred in a certain way that would define them. Either as a child(More common) or as an older individual. These "scars" appear differently for each person. Black marks on the body, deformed body part or anything in between. Usually with time, the scarred individual can use the fiend's power for themselves and their goals. Either to hunt down the same fiend or a more personal goal. Devil Hunters lose all sense of physical weaponry and armor because the power that they were given by the "scar" allows them to use one or two (Depending on the Hunter style) weapons that they will always use in battle.

It is said that the path of the Devil Hunter chooses its champions, but some say it is a simple curse, ready to take over the land. Regardless of that, the Devil Hunters have always kept to themselves, rushing into the light only if there would be an immediate danger of a fiend or a similar creature around. 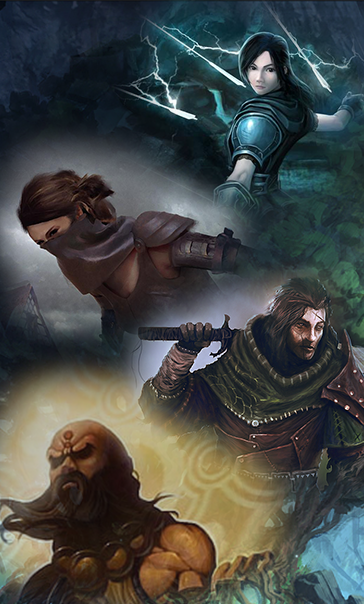 Four styles of Devil Hunters. Ranger, Trickster, Swordmaster and Guardian. Each with their own way of fighting.

You can make a Devil Hunter quickly by following these suggestions. First, read through the styles of the Devil Hunters and choose one of the following: Swordmaster, Guardian, Ranger or Trickster. Second, Dexterity should be your highest ability score, followed by Strength, Constitution, Wisdom or Charisma, depending on what style you choose on level 1. Third, choose the Haunted One background.

As a Devil Hunter you gain the following class features.

Swordmaster: Swordmaster is allowed any melee weapon that is available in the known DnD universe and is only allowed one.

Guardian: Guardian is allowed to have a simple melee and a simple ranged weapon.

Ranger: Ranger is allowed a dagger and any ranged weapon.

Trickster: Trickster is only allowed to have a one or two daggers, depending on how the player wants to play them.

You know all of the spells on the basic spell list and additional spells based on your subclass.