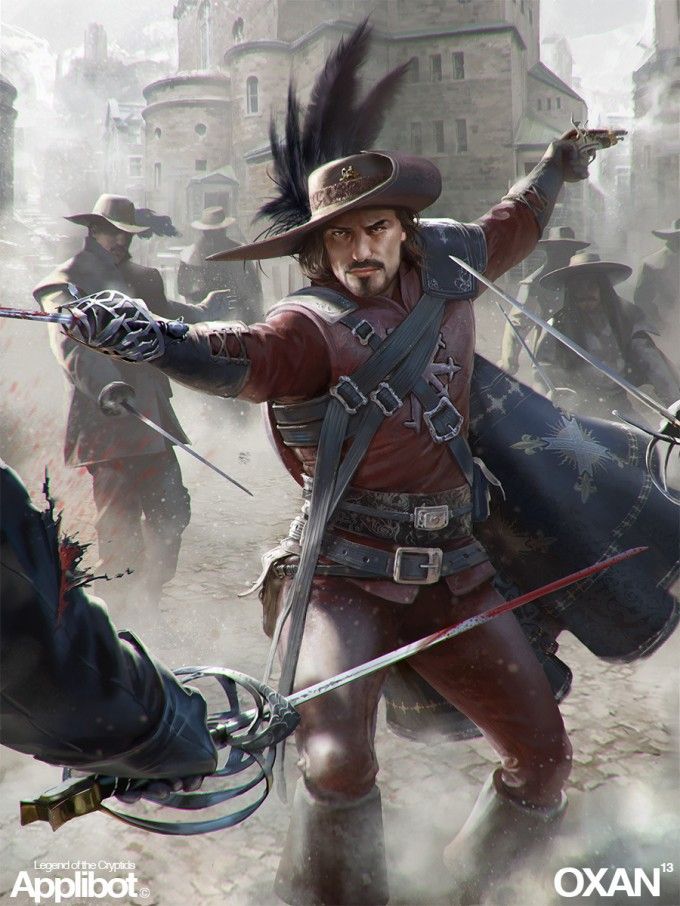 A daring swashbuckler in all his glory

Relying on their rapier wits, chivalric ideals, and raw charisma, they galavant across the land, looking for damsels in distress to rescue, dastardly villains to thwart, and precious booty to... well, okay, maybe not all their ideals are all that chivalric. But in the end, the daring swashbuckler is a combination of outstanding courage, brilliant swordfighting, and resourcefulness that simply can't be matched. Just ask them!

Abilities: Charisma is by far the most crucial ability for a daring swashbuckler. Unlike most warriors, they rely on their charm and wit rather than their raw power. That said, a high Dexterity and Constitution is always helpful considering how much time they spend on the front lines, and a good Intelligence and Wisdom bonus can be helpful with many of their skills and saving throws.

Races: Humans and elves are by far the most common races to take up a rapier in battle. It is not, however, uncommon for other races to do the same, though dwarves and half-orcs rarely do so due to their lack of a sparkling personality, let alone a willingness to rely on Lady Luck to help them get out of a jam.

Alignment: A daring swashbuckler can be of any alignment, but chaotic good and chaotic neutral are easily the most common personality trait amongst them.

Starting Age: As a rogue.

All of the following are class features of the daring swashbuckler.

Weapon and Armor Proficiency: You are proficient with all simple and martial weapons, plus the hand crossbow, lightblade, and thinblade. You are also proficient with light armor and with bucklers. If your campaign makes use of firearms, you may add them to your list of weapon proficiencies. Finally, much like a monk, you also gain Improved Unarmed Strike as a bonus feat.

Maneuvers: You begin your career with knowledge of only six martial maneuvers. The disciplines available to you are Coin's Edge, Desert Wind, Falling Star, Iron Heart, Shadow Hand, Thrashing Dragon, and Tiger Claw. If you are not using the third-party disciplines in your campaign, you may replace them with access to Diamond Mind discipline.

Unlike other martial classes, daring swashbucklers are not bound by the Sublime Ways, and may initiate any of their maneuvers or stances when wielding a finessable weapon (as long as they are physically able to do so; trying to use a blade boot with a ranged attack from the Falling Star discipline is a fool's errand, for example).

Once you know a maneuver, you must ready it before you can use it. A maneuver usable by daring swashbucklers is considered an extraordinary ability unless otherwise noted in its description. Your maneuvers are not affected by spell resistance, and you do not provoke attacks of opportunity when you initiate one.

You learn additional maneuvers at higher levels, as shown on the above table. You must meet a maneuver's prerequisite to learn it. The highest level maneuver you can learn is equal to one-half your initiator level, rounded up. Thus a 9th level daring swashbuckler can learn up to 5th-level maneuvers.

Upon reaching 2nd level, and at every level thereafter, you can choose to learn a new maneuver in place of one you already know. In effect, you lose the old maneuver in exchange for the new one. You can choose a new maneuver of any level you like, as long as you observe your restriction on the highest-level maneuvers you know; you need not replace the old maneuver with a maneuver of the same level. For example, upon reaching 9th level, you could trade in a single 1st-, 2nd-, 3rd- or 4th-level maneuver for a maneuver of 5th level or lower, as long as you meet the prerequisite of the new maneuver. You can swap only a single maneuver at any given level, however.

Maneuvers Readied: At 1st level you can ready four maneuvers, and as you advance in level and learn more maneuvers, you are able to ready more, but you must still choose which maneuvers to ready. Unlike other martial characters, you spend five minutes drinking some ale, flirting with the fairer sex, retelling a humorous anecdote, or otherwise just goofing off and impressing lady luck with your wily ways. At the end of that time, you find that you have a handful of tricks ready and rearing to go for when next you find yourself in trouble! You need not sleep or rest for any long period of time to ready your maneuvers; any time you spend 5 minutes just being you, you can change your readied maneuvers.

You can recover all of your expended maneuvers by performing any of the following actions on your turn: Either successfully taunting or feinting an opponent, flourishing your weapon (which requires a move action and an appropriate Perform check), or spending a move action to successfully Balance, Jump, or Tumble. Regardless of success of failure, you cannot initiate a maneuver or change your stance while you are recovering your expended maneuvers, but you can remain in a stance in which you began your turn.

Stances: You begin play with knowledge of one 1st-level stance from any discipline open to you. At the indicated levels you can choose additional stances. Unlike maneuvers, stances are not expended, and you do not have to ready them. All the stances you know are available to you at all times, and you can change the stance you currently use as a swift action. A stance is an extraordinary ability unless otherwise stated in the stance description.

Unlike other martial characters, you can choose to learn a stance of a higher level at any level in which you would have gained a new stance, using the same method as learning a new maneuver.

Flourish of Steel (Ex): When wielding a finesseable weapon, your flamboyant fighting style allows you to use your Charisma modifier in place of your Strength modifier for attack and damage rolls. This ability counts as Weapon Finesse for the purpose of meeting prerequisites.

Underhanded Strike (Ex): You can sacrifice one of your readied maneuvers to inflict precision damage. If you perform a successful Climb, Jump, or Tumble check as a move action on your turn to move at least 10 feet, you can burn a readied maneuver to do 1d6 points of damage for each level of the maneuver against a foe within reach (or within 30 feet if using a ranged attack). Doing so effects every attack you make until the start of your next turn as long as your target continues to qualify for the underhanded strike.

Spells, powers, feats, and other abilities that improve, stack, or augment precision damage also improve, stack, and augment your underhanded attacks, as long as all necessary conditions are met.

Note that you cannot initiate an underhanded strike at the same time you initiate a maneuver unless the maneuver specifically allows you to use precision damage (such as a sneak attack) as part of its attack.

Combat Style: You must select one of three combat styles to pursue: single weapon, dual-wielding, or sword-and-pistol. This choice grants bonus feats at the indicated levels, but does not restrict your selection of other feats or special abilities in any way. You gain these bonus feats even if you do not normally meet the prerequisites.

If you chose single weapon combat, you gain the Quick Draw feat at 2nd level, Spring Attack at 6th level, and Whirlwind Attack at 11th level.

Other combat styles may be possible as well. Work with your DM to come up with them.

Sidestep (Ex): If you make a successful Reflex saving throw against an attack that normally deals half damage on a successful save, you instead takes no damage. You only gain this ability if you are unencumbered and wearing either no or light armor.

Cunning Defense (Ex): As long as you are unencumbered and not wearing heavy or medium armor, you may add your Charisma modifier as a dodge bonus to your AC. This bonus applies even against touch attacks or when you are flat-footed, but you lose this bonus when you are immobilized or helpless. In addition, you are treated as if you have the Combat Expertise feats for the purposes of prerequisites, but only as long as you meet the prerequisites for this class feature; any abilities gained as a result are temporarily lost until you once again meet them.

Fortune Favors the Bold (Ex): Someone up above is definitely keeping an eye on you. Starting at this level, you gain your Charisma modifier as a bonus to your saving throws. In addition, you may make a number of attacks of opportunity each round equal to your Charisma modifier. This does not stack with Combat Reflexes, but it does count as that feat for the purposes of meeting prerequisites.

Additional Combat Style: You gain the benefits of another combat style at the indicated levels.

At 11th level you gain the ability to take 10 when performing any of these actions under pressure, as per the rogue ability Skill Mastery.

Savvy Swordsmanship (Ex): You have become quite savvy in combat, anticipating your opponent's tricksy maneuvers. You can apply your Charisma modifier to opposed rolls made to disarm, feint, or trip in combat as well as your initiative rolls. If wielding a finessable weapon, you are also treated as if you were wielding it with two hands, and may opt to use Dexterity instead of Strength any time you attempt such a maneuver or opposed maneuver.
At 12th level you get to roll 2d20 whenever making any of these rolls, using the better of the two dice.

Improved Uncanny Dodge (Ex): You can no longer be flanked.

This defense denies another character the ability to use precision damage against you by flanking you, unless the attacker has at least four more levels than you do.

Sly Strike: You may add your Charisma modifier to the critical threat range of any weapon(s) you wield. This stacks with Improved Critical, keen weapon, and similar effects. In addition, the critical multiplier of your weapons increase by one, such as ×3 becoming ×4.

Improved Sidestep (Ex): This ability works like sidestep, except that while you still takes no damage on a successful Reflex saving throw against attacks, henceforth you takes only half damage on a failed save. If you are helpless, you do not gain the benefit of improved sidestep.

Flurry of Blades (Ex): You lower the penalty for each additional iterative attack you make with your weapons during a full-attack action by your Dexterity modifier (to a minimum of -0). This does not change how many iterative attacks you can make, only the modifier to your base attack bonus when making them, nor does it affect the rules for fighting with two weapons or similar abilities.

For example, at 19th level your BAB for iterative attacks is +14/+9/+4. With this ability, and assuming a Dexterity of 17 (+3), your BAB would instead be +14/+12/+10. If you were using Two-Weapon Fighting, you would still suffer the normal penalties associated with that fighting style.

Parry Attack (Ex): As an immediate action, you can make a melee attack roll with one of your drawn melee weapons in response to a melee or thrown weapon attack. If his attack roll exceeds your opponent's, then the attack misses. Effectively, you may opt to replace your AC with their attack roll.

Clever Riposte (Ex): When initiating a counter in response to a melee attack, you can also initiate a prepared maneuver of choice against your attacker. Doing so does not take an action; it is treated as part of the counter. If both the maneuver and the counter successfully land, the attack is also treated as an underhanded attack, doing additional damage even if the target is invalid or otherwise immune to such an attack.