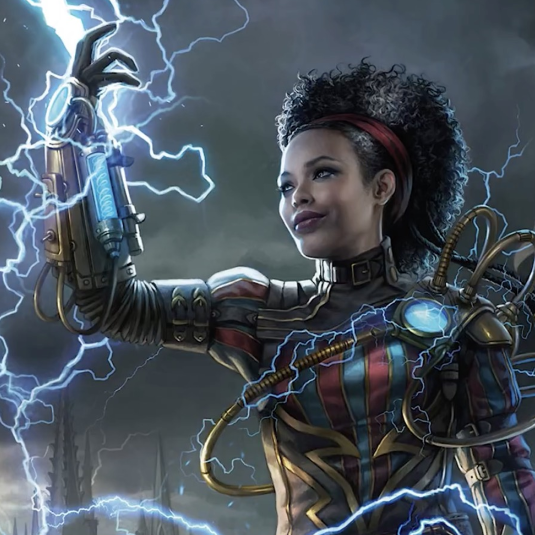 Example of a Cursed Alchemist; art by Magali Villeneuve.

Cursed Alchemists are strong anti-magical combatants, and are able to bring a large variety of offensive and utility spells to the table. They are not limited by spells per day like most spell-casters, but by the spells they have prepared and available to them; this makes them extraordinarily flexible and allows them to build up spells over time, when they are not needed.

Abilities: Intelligence is the most important ability for a Cursed Alchemist, governing nearly all of their abilities. Dexterity is also vital, since their method of spell-casting requires careful aim.

Races: Any race can be cursed by the Malediction, though it is more common for those of magically-inclined races to attempt to circumvent their condition; as such many Cursed Alchemists are elves, gnomes, half-elves, and humans.

Alignment: Any. The Malediction can afflict anyone, and anyone with the appropriate drive can find ways to bypass it.

Spells: <-Delete this section if this class does not cast spells. description of spellcasting abilities: on what stat save DCs are based, on what stat bonus spells are based, and what stat determines the highest level spell that can be cast.->. <-pluralized class name-> choose their spells from the following list:

Powers Known: <-Delete this section if this class does not manifest powers. description of manifesting abilities: on what stat save DCs are based, on what stat bonus powers points are based, and what stat determines the highest level power that can be manifested.->. <-pluralized class name-> choose their powers from the following list:

Maximum Power Level Known: This column determines the highest level power he can learn at this level.

To learn or manifest a power, a <-class name-> must have an <-relevant ability-> score of at least 10 + the power’s level.

Should a Cursed Alchemist ever cure themselves of the Malediction (an extraordinary and entirely unheard of feat in and of itself), they will find that many of the skills they taught themselves to bypass their affliction no longer work exactly as they expect. Their ability to infuse spell focii remains intact, and the construct they created to cast those infused spells in turn continues to function. However, their resistance to magical effects has faded and with it the strength of their mockeries as counter-spells; a cured Cursed Alchemist will no longer gain a bonus when attempting to counter a spell.

On the other hand, a cured Cursed Alchemist can now be affected by friendly magic and make proper use of magical artifacts, since the Malediction no longer has hold on them.

Religion: <-description of how this class typically (but no exclusively) approaches religion including likely portfolios it would worship->.

<-pluralized class name-> in the World[edit]

Notables: <-notable NPCs of this class->.

Organizations: <-info on what, where, when, and how characters of this class congregate and assemble->.

NPC Reactions: <-How NPCs react to PCs of this class->.