After being born with the latent arcane and mystical art of cryomancy these illusive sorcerers tend to hide themselves away in secrecy in the mountains to hone their skills and are frequently the cause of deadly and outstanding avalanches making them feared far and wide. With a spell unique to a cryomancer where they can physically embody themselves as ice and freeze anything that they come in contact with, they can properly bolster their spells and powers with the drawback of their own form becoming brittle. The Cryomancers are the mirror class of the more primal and irrational Pyromancer, again, another branch of magic.

The infamous cryomancers of the northern mountains train themselves in their own art. Any cryomancers lost or in need of help often seek the crystalline order to seek sanctuary from the normally judgmental wizards of the paper tower and too noticeable to fit in with the underground necromancers and street sorcerers even though they share a common magical ground. 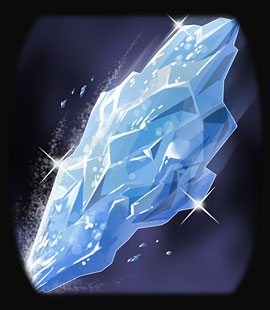 As a class, the Cryomancer is both an effective damage dealer and a brilliant support for other magical classes. The wide range of spells available to the Cryomancer, like their cousins, the Pyromancers share most of their spells with the sorcerer but with a penalty of a 20% chance to fail any spell not wholly unique to them and are only capable of learning half as many spells as would normally be available to a sorcerer plus their own, class specific spells.

Abilities: For all intents and purposes the cryomancer is same as sorcerer in abilities.

Alignment: The Cryomancers can take any alignment except chaotic, else suffer the consequences. Every time a cryomancer betrays their affiliation in a chaotic manner they incur a frost burden. The frost burden is a sign of instability in a Cryomancer and will augment their powers, but at a cost...

1. One frost burden will increase the damage of all ice spells by 1d4 Damage per level, physically however the Cryomancer will become pale and their hair will turn grey, along with a noticeably cold aura.

2. Two frost burdens augment the Cryomancer's cryomancy damage by 1d6/level and will show themselves physically as small ice ridges running the spine of the Cryomancer and white blue eyes with the same grey hair.

4. Four frost burdens will be the final line for the Cryomancer. Alongside the increase in frost burdens the Cryomancer now gains 3d6/level extra damage to their spells and if the target is killed then they will shatter and be unresurrectable. This is the final stage of the physical transformation and is only held as a viable option by the insane or the extremely skilled.

5. Five. If a Cryomancer manages to accumulate five frost burdens they will be imprisoned in ice through a horribly painful and explosive outburst of ice on par with a large scale natural disaster. Everything within a 350 ft. radius is frozen and all living things within this radius are killed unless protected specifically by very strong magical means. However, no amount of magic will save the Cryomancer, by any means.

A Cryomancer casts arcane spells drawn primarily from the sorcerer/wizard spell list. She can cast any spell she knows without preparing it ahead of time. To learn or cast a spell, a Cryomancer must have a Intelligence score equal to at least 10 + the spell level. The Difficulty Class for a saving throw against a sorcerer’s spell is 10 + the spell level + the sorcerer’s Intelligence modifier.

Like other spell-casters, a Cryomancer can cast only a certain number of spells of each spell level per day. In addition, she receives bonus spells per day if she has a high Intelligence score.

Frozen Form (Su): At 1st level, take 2 rounds to cover themselves in frost, each level has a 1d100 on every cryomantic attack to freeze an enemy if they are brought below 20% of their health scaling by rolling under 5. This number starts at five at level 1 and increases by 15 each Cryomancer's frost burden. roll under this number and the target will be frozen. (Frozen): to be frozen immobilizes an enemy. Each round on its turn, the subject may attempt a new saving throw (Fort vs DC 10 + 1/2 Cryomancer's caster level) to end the effect. This is a full-round action that does not provoke attacks of opportunity. If enemy still alive after three rounds and fails three saving throw it be completely encased in ice and Stunned untill Cryomancer would kill or release it.

Ice Slick (Su): At 1st level, the Cryomancer can walk on any form of ice, mundane or magical, without any hindrance or take any damage.

Ice-Bound Familiar (Su): At 1st level, same as sorcerer but the Familiar gains the Cold subtype

At 1st level, the Cryomancer gains Cold Endurance as a bonus feat, without prerequisite.

At 5st level, the Cryomancer gains Piercing Cold as a bonus feat, without prerequisite.

At 7st level, the Cryomancer gains Cold Spell Specialization as a bonus feat, without prerequisite.

At 9th level, the Cryomancer gains Polar Chill as a bonus feat, without prerequisite.

Fell Frost (Su): At 11st level, anyone damaged by one of the Cryomancer's spell must make a Will save (DC calculated as normal for the spell) or be slowed for 1d4 rounds.

One with Cold (Su): At 14st level, the Cryomancer gains the Cold subtype. In the Frozen Form all armed strikes, unarmed strikes or natural weapons against the cryomancer cause the attacker to take 1d4 cold damage. Frozen Form take 1 round to cover.

Ice Bind (Su): At 16st level, anyone damaged by one of the Cryomancer's spell must succeed on a Reflex save (DC 10 + 1/2 your caster level + spellcasting modifier) or be frozen.

Ice Armor (V,M): requires 1 vial of water to be consumed and gives the cryomancer +2 AC for two hours/caster level.

Summon Crystalline monster (V,S,M): requires 1 vial of water. When poured on the ground and the spell recited a monster the same as any from "summon monster" spell will be created from ice, the monster gains the Cold subtype.

Chill (S,M): after drinking a vial of water the Cryomancer can slowly lower the temperature of something to between 5 and -5 degrees over two minutes.

Hail (V,S,M): requires 1 vial of water and and an ounce of silver dust. This can be purchased at general goods stores. After mixing the silver dust and water then smashing the vial it summons a flurry of hail dealing 2d6/level (+2 in frozen form) damage to everything within a 60 ft. Radius. (Channel max rounds/lvl + int mod)

Freezing Breath (V,S, M): after drinking a vial of water the Cryomancer can spew forth in a 40-ft cone that deals 1d6+2 (+2 in frozen form) cold damage per caster level. A successful Reflex save (DC 10 + ½ caster level + spellcasting modifier) reduces damage by half. Creatures that fail their save take 1d6+2 Dexterity damage.

Icicle Guillotine (V,S,M): requires 1 vial of water. The Cryomancer can create a sheet of deadly icicles to drop upon her enemies. As a standard action within a 40-ft range +10-ft per 2 caster levels, a cryomancer can create sheets of icicles, up to one 5-ft. cube/level, though each 5-ft cube need not be adjacent to any other. The sheet of icicles falls quickly to the ground upon creation, impaling creatures and then shattering upon impact. Any creature caught beneath a sheet takes 1d4 (+2 in frozen form) damage per 10-ft fallen (Maximum 20d4 damage) unless they make a reflex for none, DC 10 + half caster level + spellcasting modifier. Half the damage is cold damage and the other half is bludgeoning damage. Creatures in the square where the sheets had fallen or adjacent to the square take 5d4 piercing damage without a save.

Frost Glory (V,S,M): requires 1 vial of water. Spell gains the Frost Brand effect for one weapon of choice Cryomancer at a distance of 25 feet for round/caster level. It works only at a distance of less than 25 feet from the caster.

The inscriptions are the means of documenting the spells that a Cryomancer can know. These inscriptions are made by the cryomancer devoting 1 day per spell learned in the Cryomantic school. Each inscription takes the form of a 1 by 3 inch blue-white hexagonal crystal, created by the Cryomancer themselves and if separated more than ten or so meters their cryomantic spells will be unavailable. How the cryomancer sees fit to keep these gems is up to them. These gems have no notable weight value.

The sacred order of cryomancers, the Crystalline Order, show up-most order and sensibility when conducting their rituals and their day to day goings. Most Cryomancers in the world follow this order however not a great deal is known about outsiders, but they do exist.

Adaptation: The Cryomancers tend to make perfect combination for other schools of magic who wish to expand their horizons or even rangers who wish to harness the powers of the elements to increase their own potential.

Sample Encounter: Cryomancers in encounters will tend to be allied with or neutral to good aligned PC's but unstable Cryomancers will pose a great deal of difficulty especially with the frost burden stages.