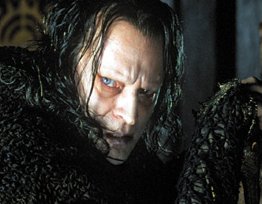 Grima Wormtongue, a prime example of a Corruptor

The Corruptor uses dark powers from discreet deities to corrupt individuals into either weaklings for the slaughter or a loyal minion. Most of his power comes from knowledge of the ancient Dark Speech, a language so vile that minor demons dare not speak too many words of it. Even mere whispers of such an evil tongue can turn clerics into killers. Each night, the Corruptor speaks with demonic powers to learn the secrets of Dark Speech and to power his divine spells. If you wanted something to compare a Corruptor to, think of Grima Wormtongue from the Lord of the Rings.

The Corruptor is a good addition to any party. He can use his Dark Speech to frighten or harm weaker creatures, strengthen his spells, weaken or damage objects, or create a vermin hivemind. Later on, he can summon a demon once per day, and create a Corrupt Thrall (the Thrall is no good for combat, but it fills the Corruptor with vitality and can be used for...diplomatic purposes). The Corruptor's own body withers as he increases in level, but he increases in power mentally. THe Corruptor's weakness is that he is utterly useless in melee combat. He likes to surround himself with minions to make up for it. Overall, the Corruptor only cares about himself but realizes that he needs others to help him get by.

Abilities: Overall, the most important ability score for the Corruptor is Charisma. Dexterity and Intelligence could aid in his skill use. A high Constitution score could also help him cast Corrupt spells more often.

Races: Really any race could be a Corruptor. Most Corruptors are humans, though, because humans have a thirst to control others by being more powerful than them.

Alignment: Corruptors are always Evil, and almost always Lawful. There are exceptions, of course.

All of the following are class features of the Corruptor.

Spells: Corruptors cast divine spells. A Corruptor must choose and prepare his spells in advance. To prepare or cast a spell, a Corruptor must have a Charisma score equal to at least 10 + the spell level. The Difficulty Class for a saving throw against a Corruptor's spell is 10 + the spell's level + the Corruptor's Charisma modifier. A Corruptor receives bonus spells if he has a high enough Charisma score. Although the Corruptor uses divine spells like a cleric, he does not prepare his spells through meditation or personal inspiration. Instead, he learns evil spells from his scrolls and grimoires and then submits himself to evil deities for the power to cast such evil spells; relying on others' work as an evildoer would. In order to prepare his spells, a Corruptor requires one hour of studying his grimoires and praying to his deity. Corruptors choose their spells from the following list:

Spells with (*) next to them are from The Book of Vile Darkness.

Spells with (**) next to them are Corrupt Spells from The Book of Vile Darkness.

Spells with (~) next to them are from the Libris Mortis.

Evil Charisma (Ex): At 1st level, a Corruptor may add a +1 enhancement bonus to his Charisma when determining the save DC for his Dark Speech ability and when making certain skill checks. The bonus improves Animal Empathy, Diplomacy, Bluff, Gather Information, Handle Animal, or Perform checks when trying to influence nonevil creatures. This bonus increases to +2 at 6th level, to +3 at 12th level, and to +4 at 18th level.

Dark Speech: At 2nd level, the Corruptor gains Dark Speech as a bonus feat. The Corruptor need not have any of the prerequisites normally required for this feat.

Improved Dark Speech (Ex): At 7th level, the Corruptor gains an improved understanding of Dark Speech and its powers:

Levels 1-4: Characters are afflicted as if by an Inflict Light Wounds spell upon failure of their initial Will Save. They also run in fear and are shaken (see Levels 5-10, below).

Corrupt Thrall/Necrotic Tumor (Sp): In order to use this ability, the subject must be under the influence of the Slow Consumption spell and also must be reduced to 1 Constitution rendered helpless from such weakness. With no other options available, the subject opens his mind to your corrupt power to stay alive. This effectively casts a permanent Dominate Person spell on the subject. The Constitution damage does not heal on its own, but the Corruptor no longer needs to deal Constitution damage to gain the benefits of Slow Consumption (he still needs to touch the victim once each day to keep the spell active). The victim's body shrivels while his hair and skin turn pale white (think of King Theoden under Wormtongue's influence). A Corruptor may have more than one Corrupt Thrall, but he does not gain any more benefits from the additional Slow Consumption spells. Alternatively, the Corruptor may gain the ability to cast Necrotic Tumor at will, whether he knows the spell or not.

Greater Dark Speech (Ex): At 13th level, the Corruptor gains an even greater understanding of Dark Speech and its powers:

Levels 5-10: Characters are afflicted as if by an Inflict Light Wounds spell upon failure of their initial Will Save. They also run in fear and are shaken. (see Levels 11+, below).

Power: Greater Dark Speech allows the Corruptor to improve his effective caster level by 2 (instead of just one) when spoken for Power.

Dark Unity: Using Greater Dark Speech for Dark Unity allows the Corruptor to create a hivemind amongst up to one hundred vermin with each of up to 2 HD.

Corrupt Body (Ex): At 16th level, the Corruptor's physical form begins to deteriorate from the flow of evil through his body, but his power is strengthened. He gains -2 Str, -2 Dex, -1 Con, +2 Int, +0 Wis, and +2 Cha. His appearance instills fear in his enemies, giving him an inherent +2 bonus to Intimidate checks. His mere touch deals vile damage to nonevil, living, corporeal nonoutsiders. The amount of damage is equal to half the Corruptor's level, to a maximum of 20 damage.

Dark Speech Fluency (Ex): At 19th level, the Corruptor becomes almost fluent in Dark Speech from the teachings of the vile gods he communes with each night:

Levels 1-4: Characters are affected as if by a Power Word Kill spell. Even if the characters passed the saving throw against the Dark Speech, they are still afflicted as if by an Insanity Spell and an Inflict Light Wounds spell of the Corruptor's level. They also run in fear and are shaken (see Levels 5-10, below).

Levels 11+: Characters are afflicted by an Inflict Light Wounds spell of the Corruptor's level. In addition, characters flee from the source of their fear as quickly as they can, although they can choose the path of their flight. Other than that stipulation, once out of sight and hearing of the source of their fear, characters can act as they want. Characters unable to flee can fight. They are also shaken for 1d10 rounds, suffering a -2 morale penalty on attack rolls, saves, and checks.

Power: Dark Speech Fluency allows the Corruptor to improve his effective caster level by 2 (instead of just one) when spoken for Power.

Dark Unity: When used for Dark Unity, Dark Speech Fluency allows the Corruptor to create a hivemind amongst one hundred vermin each of 3 HD or less.

Religion: Corruptors usually worship only the most evil gods like Demogorgon, The Patient One, Graz'zt, Hextor, Nerull, or Vecna.

Other Classes: Corruptors usually join parties with the sole intention to manipulate them to his advantage or protect himself while carrying out his plans. He may act like a team member, but he really believes that he is their superior.

Combat: The Corruptor is not suited for combat by himself. When with a party, he will cast detrimental spells on the enemies, such as Sorrow, Wave of Grief, or Touch of Fatigue. Then he might use some crowd-controlling spells or Dark Speech while his minions... excuse me, while his "allies" beat down the opposition. Corruptors also usually have evil plans to unfold during the campaign, such as getting close to important political or economic figures until they can secretly cast Slow Consumption on them and slowly turn them into a Corrupt Thrall.

Advancement: Corruptors are powerful enough on their own, and have no need for multiclassing. However, there are certain advancement options which would be highly favorable. Using the Slow Consumption spell is a must if the Corruptor wishes to gain the benefit of a Corrupt Thrall later on. An alternate way to gain a thrall without Slow Consumption is through the Necrotic Cyst and then Necrotic Tumor spells. Since the Corruptor will have to gain a Willing Deformity feat at 4th level, it might be beneficial to pursue other Willing Deformity feats as he advances. Intimidation can end up being a powerful asset, because as a skill it doesn't take up a spell slot. Augment Summoning and other such improvements to summoning could serve as another possible pathway for the Corruptor to take. He could summon either demons or undead to fight against his weakened enemies.

Corruptors seep their way into the high parts of society, using their poisonous words to corrupt entire cities to their benefit or pleasure. Some Corruptors are great contributors to the Black Market or servants to evil gods. Either way, they are very dangerous and very good at spreading misery and evil throughout the land.

Daily Life: Wake up, corrupt the justice system to thwart those that would overthrow you, make exchanges in the Black Market, glean power from your Corrupt Thrall while administering him fake "medicine" to "heal" his fatigue, torture enemies, mull over grimoires, pray to Vecna, sacrifice a small child, then get some sleep. You'll need it for the big day tomorrow when you force your thrall to sign you into his will since you two have become so close.

Organizations: One Corruptor almost never works with another one. If Corruptors end up working together, it is in the service of a very powerful evil with a purpose (usually to take over the world or something). Corruptors may be parts of crime syndicates, evil temples, or divisions of the Black Market.

NPC Reactions: NPCs can easily see the Corruptor as evil, but upon talking to him further, they might find him to be strangely easy to talk to and a comforting person with helpful advice.

Characters with ranks in Knowledge (history) can research Corruptors to learn more about them. When a character makes a skill check, read or paraphrase the following, including information from lower DCs.

Corruptors in the Game[edit]

Corruptor PCs will join the party to help complete his evil plans or if he simply wants to find some objects of power to sell off or use to his advantage. A Corruptor NPC might try to destroy the PCs when they get in his way or try to save his Corrupt Thrall.

Adaptation: Corruptors could be mainly demon summoners that use their Dark Speech to impress their demon lords as they summon them to the material plane for their services. Another path that the Corruptor could take is through undead minions with his Animate Dead spell. Either interpretation is good because what a Corruptor needs is minions to do his dirty work. If the Corruptor has more opportunities to roleplay rather than fight, then acquiring more thralls is a good option.

Sample Encounter: "You have interfered with my plans for the last time." said the Corruptor as he rose from his place near the King's ear. "Destroy them!" the King wretched. Guards loyally draw their swords against you. You spot the Corruptor whispering underhis breath while staring intently at the group. A sudden feeling of sorrow and weakness begins to flow over each of you as the guards approach.