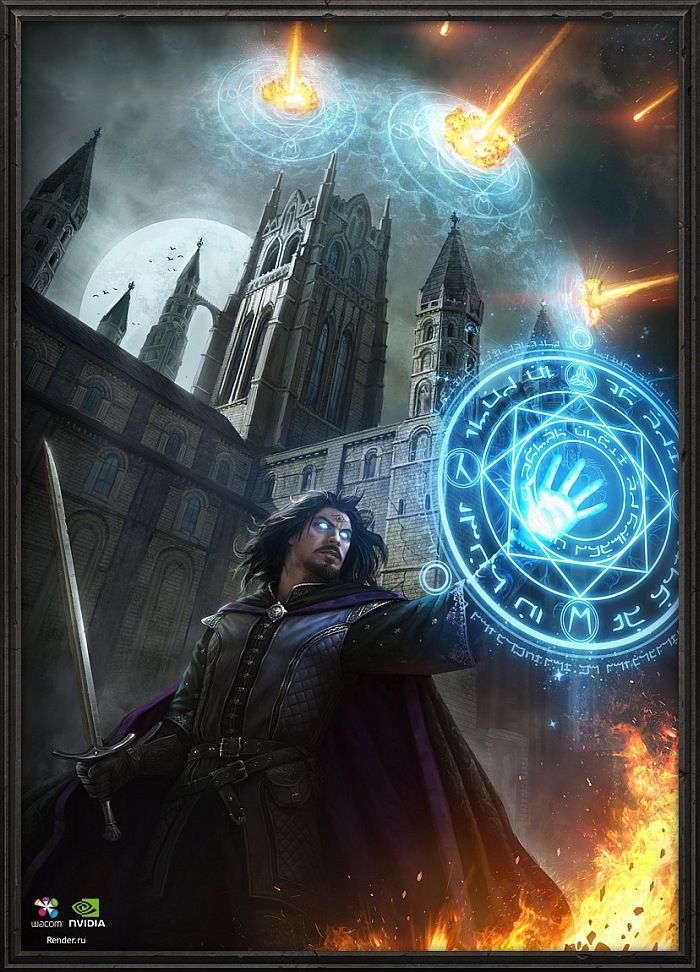 Masters of counter magic, Avatars of dispelling. The Control Mages are a select group of spellcasters who specialize in stopping others from using magic and protecting themselves. This class is highly inspired from the Blue Mage class.

Masters of counter magic, Avatars of spell-breaking. The Control Mages are a select group of wizards who specialize in stopping others from using magic or attacks on them. This class is highly inspired from the Blue Mage class.

The Control Mage is a specialist in the arts of countering and dispelling magical effects. They also excel at protecting themselves.

Abilities: Like with most spellcasters, Control Mages use Intelligence when determining how many spells they can cast and when determining how powerful their spells are. High Dexterity is a must for the Control Mage, not just because they lack any armor proficiency, but also because it allows them to cast their spells reflexively and helps them react quickly during combat.

All of the following are class features of the Control Mage.

Weapon and Armor Proficiency: Control Mages are proficient with no armor and any simple weapon plus longswords.

The Control Mage can cast all spells they have a spell slot for. All spells cast by a Control Mage require only verbal components and can be cast spontaneously, like a Sorcerer would. Because a Control Mage's spells have no somatic components they do not suffer from arcane spell failure. However, in order to use any of his Control Mage spell-like abilities or powers a Control Mage must not be wearing anything heavier than light armor. Control Mages may cast spells from the following list:

Read Magic (Sp): Control Mages may use read magic at will without using a spell slot.

Vigilent Eyes (Sp): As a free action, a Control Mage learns infuse magic into his eyes that make him more perceptive to those around him. Doing so costs one of the Control Mage's 2nd level spell slots. The Control mage's eyes give off a faint, almost unnoticeable glow. If an enemy attempts to make a melee attack against the Control mage he may attempt a reflex saving throw. The DC for this reflex saving throw is equal to enemy's attack roll. On a successful save the Control mage only takes half damage from the attack. This effect lasts for one minute per caster level. If the Conrol Mage would be unable to see an attacker (ex: if they are invisible) this ability does not work on their attacks.

Improved Vigilent Eyes (Sp): As 'Vigilant Eyes' but the reflex saving throw can now be applied to ranged (non magical) attacks as well. This ability costs one of the Control Mage's 3rd level spell slots.

Focus Aura (Sp): A Control Mage may focus his auras into more impressive versions, for himself, as a swift action. If this is done the Control Mage's Reactive or Control Aura/(s) cost a spell slot two levels higher than normal, have a range of personal, double in effectiveness, and gain additional effects: Reactive Aura - The Control Mage gains the Evasion ability. If the Control Mage already has Evasion then it grants Improved Evasion. If the Control Mage already has the Improved Evasion Ability then upon a successful Reflex save (a save granted by the 'Reflexive Casting' ability does not count) he gains an attack of opportunity on the creature that attacked him (this effect only works for creatures. i.e. a successful Reflex save against a trap does not allow you to attack the trap). The creature must be within your normal attack range. Control Aura - The Control Mage gains damage reduction +1 per Control Mage level/- for spells only. A focused aura lasts for 1 round/ Control Mage level. The Control Mage can choose to focus both auras (each requires its own swift action) as long as he uses up an appropriate spell slot for each. The control mage can choose to focus an aura and project an aura of the same type at the same time (each requiring it own swift action), so long as he uses the appropriate spell slots. However, the effects do not stack. Ex: Suppose Magnus is a Control Mage of 12th level and he chooses to project his reactive aura in round one and focus his reactive aura in round two. He must use a spell slot of 4th level and 6th level respectively. In round one all allies within range would gain a +6 to any reflex saving throws, including Magnus. In round two Magnus would gain a +12 to his reflex saving throws but lose the +6 given by the projected aura.

Greater Aura: An Epic Control Mage eventually masters the use of his auras. Both auras can now be projected (normal range for a projected aura) and grant the effects as if they were being focused. This uses a spell slot 4 levels greater than normal. The Control Mage cannot project a greater aura at the same time that he is projecting a regular aura or fucusing an aura of the same type.