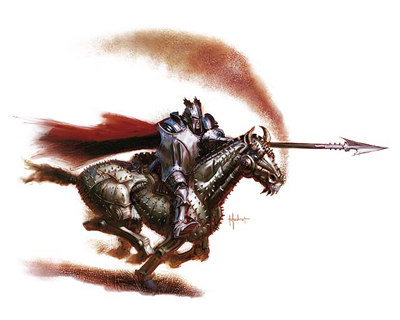 Few would stand before the charge of a thousand pounds of metal.

A clockwork steed is a relatively minor construct crafted in the image of a horse. Requiring no sleep, food, or water and utterly immune to disease, clockwork steeds are much hardier than living equines, and though they were originally intended to serve as mounts and beasts of burden they can hold their own in combat. Each clockwork steed is owned and commanded by a single creature, but the owner can pass possession on to another creature at any time, so it is not uncommon for a clockwork steed to be emblazoned with a family crest or the symbol of some order and then passed down from one generation to the next, becoming an odd sort of heirloom.

A clockwork steed attempting to preserve its own existence is methodical in combat, simply attacking the nearest creature until the opponent falls. They are able to accept a wide range of commands, however, so their tactics may vary depending on the whim of their owners. Usually, they will be commanded to flee rather than fight, except as a last line of defense.

DC 15: A clockwork steed is a horse-shaped construct that serves as both mount and beast of burden.
DC 20: Clockwork steeds follow their owner's orders faithfully, but control of a steed can be passed on to a new possessor if its owner is willing.

Clockwork steeds are almost always encountered with their masters, but are sometimes "stabled" as an ordinary horse would be. Some masters choose to leave other creatures more suited to combat to defend their steeds (usually some form of homunculus).

Clockwork steeds are tireless and unquestionably loyal mounts, obeying every command given to it by its master. Able to shrug off blows that would cripple ordinary horses, they are the mount of choice for those who can afford them. A clockwork steed has a +50% carrying capacity due to its composition, rather than the +25% carrying capacity that a quadruped normally receives.