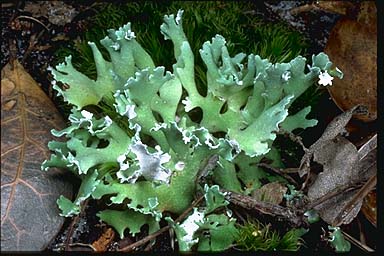 An image of a Cladonia prostrata lichen.

You have a strange pale green moss growing up the side of your leg.

Cladonil are ambulatory lichens that seek out a host to protect them from predators. Cladonil appear as a pale blue-green lichen that moves by rippling its many tiny fringes.

Lacking any natural attacks, cladonil prefer to hide when threatened, usually on a tree or rock. A cladonil can only attach itself to a willingly or helpless host(as a full-round action). To remove a cladonil, the host must simply deal 1 point of fire damage to the symbiont, causing it to slide off and scurry away. Attaching or removing a cladonil deals no damage to the host.

Host Benefits: A cladonil grants its host a continuous +1 bonus to Strength while attached.

Barkskin (Su): This works exactly like the druid spell of the same name except the a cladonil may only use it on its host and it stacks with other barkskin spells and natural armor. At will, CL 9.

Skills: A cladonil has a +20 bonus on Hide checks due to a mundane plant appearance.