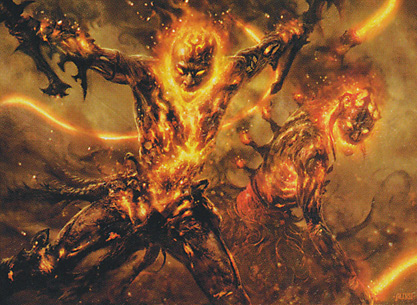 After the Great Aurora, the transformation of the flamekin was perhaps the most dramatic—and tragic.

Once their fires burned bright, but now they are extinguished, reduced to skeletal, smoking husks called the cinders. In Lorwyn, they sought emotional transcendence, but in Shadowmoor they seek only to satisfy their malevolence and need for revenge.

Cinders are the same beings as the flamekin of Lorwyn. According to their legend, the cinders' flames were taken long ago by a traitor known as the Extinguisher in an event known as the Great Aurora. Due to this, they have become a very bitter people with pained lives. Most cinders want the entire world to suffer as much as they do and thus they attempt to sow chaos and destruction until nothing good remains.

Play a cinder if you want...

As their name suggests many of the cinders have lost their ability to hold a constant flame making them walking skeletal, smoky remains. As of such, cinders are often alienated by other races that have the horrible privilege to see them outside the Shadowmoor. The remains of their flames match their mood, with red flames meaning angry, orange not angered or amused, and golden-yellow a good mood. A gold-flamed cinder is a magnificent sight, if not pretty.

Cinders are moody, and prone to acts of violence. As such, rejection is more likely from other races than not. The cinders, however, do not mind, as they spend much of their time brooding over their pains, and the wrongs done to them. They can be very dangerous and sadistic. Most cinders are intent on causing extreme pain and suffering to the peoples around them. They tend to be misanthropic and reclusive, though there are some rare stories of those who open up to kindness.

Vitraol is a cinder bard that travels the countryside, spreading fires along with his sordid songs of sad fate. He is a wanted arsonist that is known for performing in the day, and then setting fires near dusk. He is often seen laughing as he plays his panpipes from the roofs of the burning buildings as the town is ravaged by flames.

Urlux is a cinder warlock that used to be a cleric of Tuern. After the god was killed by Bane, she was left without direction and thus turned to Imix as her new god, worshipping him as her patron. She is tolerant of the firenewts which provide her company. However, she is completely cold towards others.

Farlae is a cinder wizard who was rescued off the road amid a storm by a party of adventurers. After being nursed back to health, he grudgingly followed them and slowly began to open up. He has a particular soft spot for the party cleric, who eases his pain with magic. He now follows them as a member, but mostly to keep an eye on the cleric.