When a drow fails a test of Lolth, or Lolth finds a drow wanting, Lolth punishes that drow in the most horrific of ways; she transforms them into a chwidencha. A chwidencha has a radial body that measures about 11 feet in diameter and weighs as much as half a ton. Many long legs (with long, barbed, spikes on the end) emerge from the same point on this body. Drow sometimes keep chwidenchas in deep pits, using them to slay foes and tear apart the weak and the incompetent. 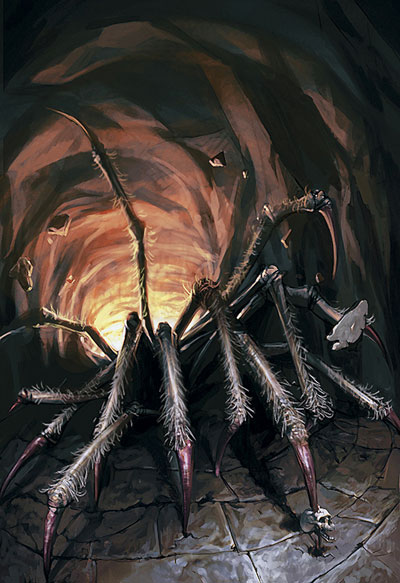 A Chwidencha, by James Zhang.

Chwidenchas burrow to move behind their foes and surprise them. They then use impale to hold on to a foe as long as possible, using claw frenzy when their foe escapes.

A character knows the following information with a successful arachana or religion check.

Chwidenchas can be found both solitary and among others of their kind.