Chupacabras are a reptile-like being, having leathery or scaly greenish-gray skin with the ability to change colours at will, almost like a chameleon. In the dark, it will change to black or a deep brown colour; in a sunlit area surrounded by vegetation, it changes to green, green-grey, light brown or beige. as well it has long feathery spines or quills running down its back. They stand approximately 3 to 4 feet high, weighing around 200 pounds, and move with a short hopping motion. Chupacabras have a thin leathery batwing-like fold of skin that stretches under their arms from their elbows to about halfway down their torsos. This wing structure allows limited flight and normally stays folded away while they are on the ground, barely visible. They have a lizard-like nose and face, a forked tongue, and large fangs. Chupacabras hiss and screech when alarmed, as well as releasing a sulfuric stench. When it screeches, the chupacabra's eyes glow an unusual red which gives those who see them nausea. 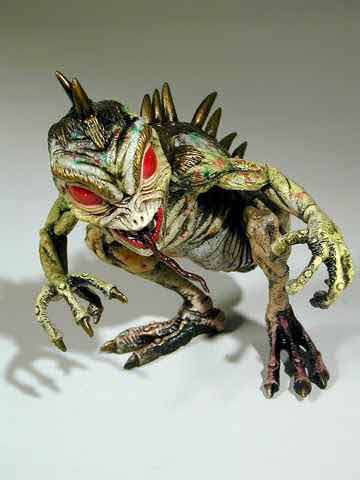 A Chupacabra ready to strike

Chupacabras attempt to leap from the darkness and attack with their grasping claws. They then will bite their targets until they fall unconscious so they can then use their suckling drain to feed of their victim. If anything attempts to stop their feeding or disrupt their attacks they use their sickening stare to hold them off till they are finished with their victim.

DC 25: Chupacabras often feed upon defenseless herd animals, sucking them dry of fluids and leaving the bodies to rot. They will also attack and feed upon the unlucky keepers who might come across them while they are attacking the animals. In other instances they have been known to attack any creature that wanders into their territory. Chupacabras are believed to be failed experiments by Mind Flayers to alter various animals into slaves or soldiers, that could help them conquer the world. At some point when the Mind Flayers gave up on this work the creatures either escaped or where released into the wild.

Chupacabras live in small groups of 3 or 4, often dwelling in wild lands near farms or grazing fields. They have also been known to make homes near areas where other creatures might hunt or leave potentially weakened prey behind for them to ambush and feed on. Sometimes other intelligent evil creatures will lair in areas that allow the chupacabras to act as a form of natural defense, or where they may help finish off potential intruders.