Chosen of the Spider Queen[edit]

The spider queen makes you the living vessel of her power in the mortal world.

Prerequisite: 21st Level, Worship either Lolth or Arachne or The Raven Queen 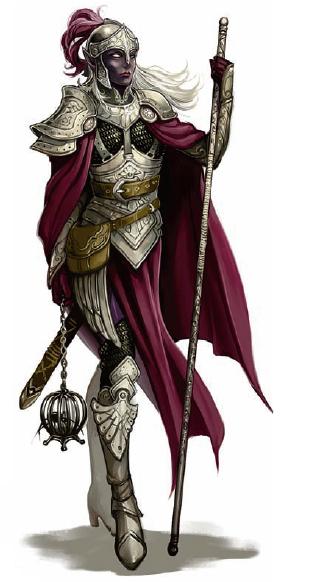 A Chosen of the Spider Queen.

The spider queen you serve chooses you to serve her above all others as her proxy. As a chosen of Arachne, you protect her followers and battle the followers of Lolth, and are the instigator in many uprisings against Lolth. As a chosen of Lolth, you purge the weak and incompetent, and fight against Lolth's enemies. To aid you in this task, the spider queen weaves the essence of the arachania into your body and soul.

As the chosen of the spider queen, you are entangled in the fierce civil war for the mastery over spider kind. Your spider queen has chosen you as the leader of her followers in the war that has consumed the spiderkind for many ages. You are also, like other chosen, a worldly exarch, recieving advice and commissions from your deity.

You’re a hero. It’s not bad news that your deity’s enemies want to eradicate you before you can achieve full divinity. Their efforts make your god’s enemies easier to find. If other characters in the adventuring party are not happy about having a cosmological target painted on you, that can be up to the party or the DM to account for in the campaign’s final tier.

Many Chosen can live for centuries. However, as a Chosen grows more powerful, the divine fire placed in his or her soul inevitably transfigures the mortal shell. When no vestige of the mortal life remains, it is time for the Chosen to ascend to the celestial court of his or her deity and champion the deity’s cause in the immortal realms. No Chosen remains long in the mortal sphere once he or she has reached the pinnacle of divinely sponsored power.

Chosen of the Spider Queen Features[edit]

All Chosen of the spider queen have the following class features.

Spider Queen's Gift (21st Level): Increase two ability scores of your choice by 2 each.
Return From the Great Web (24th Level): The first time you die each day, you can return to life at the start of your next turn. You appear in a space of your choice within 5 squares of where you died and have hit points equal to your bloodied value. When you do this, you unleash the power of the great web (close burst 2). Make an attack against each enemy in burst (Charisma Vs. Reflex). On a hit, the target is restrained (save ends). The burst creates a zone of spiderwebs which lasts until the end of the encounter. The zone is difficult terrain.
Spider Queen's Favor (30th Level): When you have expended your last remaining encounter power, you regain the use of one encounter power of your choice. In this way, you never run out of encounter powers.

Chosen of the Spider Queen Powers[edit]