Chiroptera (also known as bainligors) are small, flightless bat-people. Their primitive tribal culture is found in the upper reaches of the Underdark, natural caverns, and abandoned subterranean dwellings or mine-works. Primarily carnivorous, they eat insects, larger animals that they hunt on the surface, and edible fungi. Their ears are huge, pointed, and fantastically sensitive; their noses and elaborately sculpted facial features are those of bats. They have disproportionately long fingers lightly webbed with the remnants of their wings.

They are not blind, though their eyes are quite weak, and must be protected by heavily-tinted glasses or goggles in daylight lest they be utterly blinded. Their primary sense is hearing, which is so sensitive they can hear a pin drop three hundred yards away. Though chiroptera can speak any language, their native tongue is too high-pitched for others to hear, consisting entirely of ultrasonic squeaks that other races can only produce via magical or artificial means. Even if one speaks in a voice low enough to be heard by other races, its voice remains a high-pitched squeak. 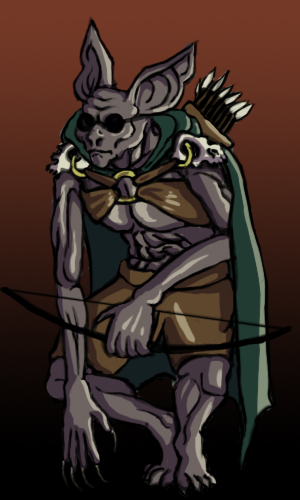 Often falsely maligned by humans, who sometimes call them "night terrors" or bainligor, the chiroptera are generally a peaceful race.

No one – not even the chiroptera – know the origins of their race, but scholars who have studied them believe them to be the descendants of several common bat species "uplifted" to sapience via magic; though who did so, for what reason, and even when are unknown. The chiroptera are often associated with the Underdark, but in reality, they fear and despise the Deep Dark because they are frequently preyed upon by monsters, drow, and other denizens of the underworld.

Chiroptera society is tribal, with each tribe consisting of no more than twenty or thirty individuals led by a matriarch—almost always the oldest female in the tribe. Every night, the entire tribe—including children—venture forth from their hearth-caves to hunt game. Lacking any knowledge of metallurgy, chiroptera usually hunt using bows with a stone-tipped arrow and well-made stone hand-axes, though tribes living near communities of other races will often trade meat and hides for metal weapons – especially throwing daggers, with which they display a terrifying proficiency.

Though their natural society is primitive, chiroptera are just as intelligent as other humanoid races. Perhaps because of their supposed sorcerous origin, they tend to view scholarly magic with great distrust and do not like to handle magical artifacts or associate with practitioners of magic unless they absolutely have to. Innate or "natural" magic comes easily to them, though, especially elemental magic. They utterly despise drow, who routinely prey upon their populations, and are not fond of elves either. Relationships with dwarves, svirfneblin, and other non-evil subterranean races vary widely, though they are usually peaceful and based on trade or hunting pacts.

Most chiroptera adventures have left their native tribes behind at a young age, often exiled for unwise acts or orphaned by drow slaver attacks; though, like every other race, there are individuals who set forth from home just to experience the wide world beyond their hearth-caves. Because of their nocturnal nature, unparalleled hearing, and deftness with bows and daggers, many chiroptera adventurers become rogues or rangers. They make superb assassins, though their generally good natures mean that they only target evil-doers; as such, many belong to organizations like the Harpers that are dedicated to curbing evil by subtle means.

Tribal chiroptera believe very strongly in self-reliance and do not natively worship – or even acknowledge %ndash; any gods. Those living among other races often find the concept of worshipping higher powers to be silly at best, and dangerous at worst, as doing so goes against their native culture’s greatest tenet: depend only on yourself and those around you. Chiroptera are not swift to make friends with persons of other races, but once they do they are fiercely protective and dependable.

Anthropomorphic bat-folk.
Ability Score Increase. Dexterity increases by +2, and Wisdom increases by +1.
Age. Chiroptera mature very quickly and become adults at just 10 years old. They have shorter lifespans than humans and usually die around 40 years old.
Alignment. Generally good, but there are always a few bad eggs.
Size. Medium (Usually between 4 to 5 feet tall).
Speed. Your base walking speed is 30 feet.
Superior Hearing. You have advantage on Perception checks involving hearing. If you can't hear, you have disadvantage on attack rolls.
Daylight Sensitivity. Chiropterans are nocturnal by nature and must wear heavily-tinted glasses or goggles when in daylight or be Blinded. However, as long as their hearing is not impaired, Blinded Chiroptera suffer no penalties even at night.
Skill Proficiency. All Chiroptera are proficient in Perception.
Echolocation. Blindsight of 30 feet.
Low-light vision. Low-light vision a chacter can see in color twice as far as a human in starlight, moonlight, torchlight, and similar conditions of shadowy illumination.
Languages. Chiropteran, Undercommon or Common (player/DM choice).