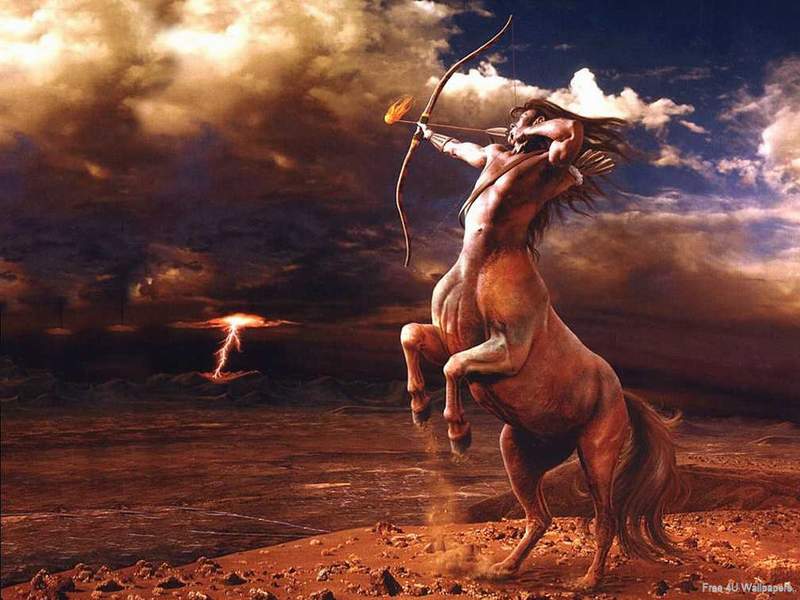 Centaurs are free spirits of the forest. They have a deep connection to the fey and drinking. But, mostly drinking. They are most notable for their wars in the early years against humans. They fought for control of the forests they call home. Ultimately they lost because they don't reproduce fast enough. They are generally friendly, but a bit dimwitted. Quick to anger, but also quick to forgive. Although, if you find yourself threatening a centaur's family, forest or drink, you are in for a beating.

Centaurs have the torso of a man attached to a horse where the horse's neck would be. They are typically between 5 1/2 and 7 feet tall, with a body length about the same. They weigh somewhere between 500-600 pounds. Their human chests are covered with a brownish thick hair, much like Freddy Mercury's was. Their eyes are usually yellow, or green, but white and a shocking blue are not entirely uncommon. Their skin is usually a pale color, but they tend to get so dirty that most think that they are tan. The horse part ranges in color as much as horses do.

Centaurs get along especially well with fey creatures and other forest dwellers. They don't exactly see eye to eye with elves, finding them a bit arrogant, but they respect their love of nature. They especially love drinking with dwarves, and they feel some kinship with half-orcs, as they are in a similar situation with a world that doesn't seem to have quite enough room for them.

Typically chaotic in alignment, centaurs love to run free and do what they want with no ties but their family and the forest. That being said, the leaders are usually lawful, as they are the few which show a penchant for the discipline required to think ahead and plan to make sure of the survival of the herd.

Centaurs do best in open plains. They love to run, but that is sadly not much of an option for them anymore. They are mostly found in forests living amongst satyrs, far from the reaches of civilization. They do not like hot climates, and feel comfortable in snow without so much as a scarf on.

Centaurs revere nature, and feel no particular devotion to a deity. When a centaur dies, they take his body and arrange it so that it appears to be sitting, close the eyes, and each member of the herd comes forward and tells the deceased a story, or a joke, or sings a song. When each has done this they bury the body.

Centaurs speak sylvan. Centaurs that grow up near an elven community might also learn elvish, but they generally don't have a taste for other races. Centaurs that live in forested mountains with dwarves nearby learn to speak dwarvish without fail, as the dwarves make for fantastic drinking companions.

Centaurs decide their own names based on what they like or think that they should do with their lives. They are referred to as "you", and "youngling' before they choose their own name. The ritual of name choosing is a big turning point in the life of a centaur. It can happen at anytime. A centaur knows when he has found the right name for himself and tells the rest of the herd, who gather together and share stories, songs, and dance.