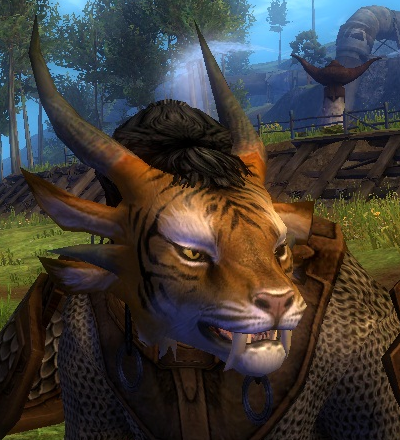 Syleen Tigerclaw, a Charr. Notice the feline traits and horns.

The charr are an technological advanced cat-like race who's history is filled with war. A typical Charr only appreciates four things in life: Good meat, a fine made blade, whiskey and killing.

The charr are carnivorous feline-like humanoids. They stand on their hind legs and are taller than a human by half of an average human's height. They prefer a hunched pose when standing, but will on occasion stand tall and straight. When they are moving, and their paws are unoccupied, the charr favor running on all four limbs with a loping gait. While the males are described as being generally stronger and the females more lithe and quick..

They have a short fur from head to toe in a variety of colors and patterns, many of which are similar to those of lions, cheetahs and tigers. Their fur patterns are also like that of leopards, snow leopards, and even some fur types of common housecats. Many charr have a longer mane of fur between the shoulders and on the back of the head and neck. A male charr has less fur on the tail with longer fur only on the tip, while the female's tail has longer fur from top to bottom.

The charr muzzle is elongated and the mouth filled with prominent sharp teeth suited for their carnivorous diet. The teeth are larger on the males, particularly those on the bottom jaw which are usually considerably smaller on the female. The head has four horns, those from the top of the head are more prominent than those between the two sets of ears. The top pair of ears hears high frequencies such as a dog might, while the bottom pair hear low frequencies similar to an elephant. However, they have difficulty hearing mid-frequency sounds such as those used in human speech, which can aggravate already tense charr-human relations. Like cats, charr have six flat mammary glands hidden under their fur.

The charr have a set of sharp claws which can be used as knives for general tasks but it appears the charr tend to favour weapons when fighting.

Cubs are born fully furred, with open eyes and functional limbs. Within a few days, cubs can follow their mothers over even the harshest terrain. They eat meat within a month of birth, and are fully independent several months later. Charr mature at about the same rate as humans

The Charr have respect towards great hunters like half-giants and such other great folk. They call humans "mouse" and everything that reaches under 6 foot is to be called meat.

Seeing that the Charr have a heavy militaristic mindset and are ill-tempered, they are often mistaken for Lawful Evil. The truth is that a Charr may be of any alignment. Though Good aligned Charrs are rarely seen.

Charr mostly inhabit the same lands as humanoids, preferring grass lands with medium forest sizes and an occasional field, though they have no problems adapting to rough situations due to their fur.

The Charr have no gods, instead they have a military hierarchy as following:

The four Legions are:

A Charr's Legion does not restrict his options of class.