Concept and content directly borrowed and modified from ChanceCaster_(5e_Class) to better align with fullcaster leveling progression.

The moon shone upon a coin, being flicked into the air repeatedly. The only noise was the clink of metal every few seconds. An elf in dark clothing was smiling from under his hood, watching for his opportunity. On the last flip, his hands were a blur as he weaved his magic. As the coin reached the high point of the flip, his finger stretched upwards. His eyes focused on the coin, waiting to see it levitate, and instead it was pushed higher into the sky, as a small fire bolt had erupted from his hand instead. He laughed, and vanished into the night. Such is the way of chance.

Wild magic not wild enough for you? Is it the thrill of the dice, the chance of failure that drives you? Perhaps the odds of a great success, and watching everything else crumble except you is more your style? Then the chancecaster is the way forward.

You can make a chancecaster quickly by following these suggestions. First, Charisma should be your highest ability score, followed by either Constitution or Intelligence. Second, choose the Charlatan background. Third, choose a light crossbow with 20 bolts, an entertainer's pack and a dice set.

As a chancecaster you gain the following class features.

You have the ability to cast spells beginning at 1st level. Charisma is your spellcasting ability for your Chancecaster spells, since the power of your magic relies on your ability to perform and amaze.

Chance has always been an ally of yours, and you have learned to weave your magic through it. At 1st level, you may choose one gaming set that you are proficient with to act as an arcane focus.

At 1st level, your gambling extends into the arcane. You may attempt to cast a random spell. As an action, you may either cast a random cantrip or you may expend one of your spell slots to cast a random spell. After spending the slot, roll 2d12 and choose one result, consulting the table associated with the level of spell you cast. For example, if you expend a second level spell slot, you would consult the Level 2 table. If either die results in a 12, you may choose to reroll both dice and cast both spells. However, if upon rerolling either die rolls a 12, the spell fails. You must cast the spell(s) at the given level, and, therefore, cannot use higher level casting with this feature.

After determining which random spell you will cast and if it does not have a range of self, roll a d20 to determine the target of the spell. On a natural 1, the DM chooses the target of the spell. On all other rolls you may choose a target as if you can sense the magic being summoned and then direct it. You must follow the range of the spell you cast. You can use your movement after determining the spell and its target but before casting the spell, as if you move while the magic is being summoned. 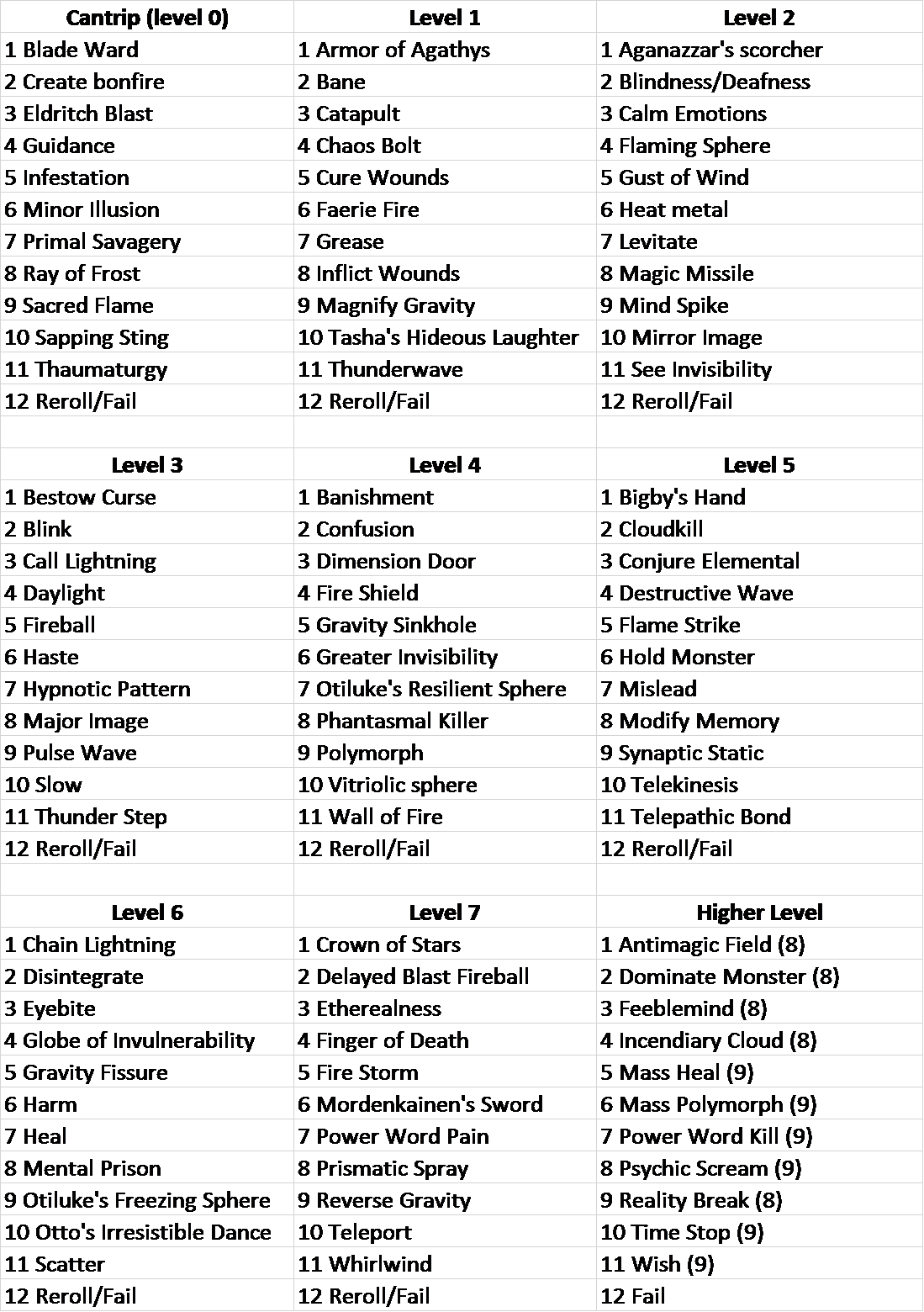 At 2nd level, you have enough gambling experience to influence the way you wager. You may choose an archetype: High Roller, Cheat, or Low Stakes. Each is detailed at the end of the class description. Your choice grants you features at 2nd, 6th, and 14th level.

At 2nd level, you tap into a deep wellspring of magic within yourself. This wellspring is represented by wager points, which allow you to manipulate your magical gambles. You have 2 wager points beginning at level 2, and gain one additional point every time you gain a chancecaster level. You regain all spent wager points when you finish a long rest.

You have learned when to take a risk and when to back down. At 3rd level, you can spend your wager points in two additional ways. You can Double Down or Fold.

At 3rd level, whenever you choose to use the On the Tables feature, you may spend a number of wager points equal to the spell level table (8 wager points for the Higher Level table) and double down. When you double down, any spell you cast that is incapable of targeting more than one creature and does not have a range of self gains the twinned spell metamagic effect. You must spend your wager points and double down before rolling 2d12 to determine which spell(s) you cast. This feature can only be used when expending a 1st level spell slot or higher.

You know when its time to back out. At 3rd level, you may spend one wager point to either Dash, Disengage, or Hide as a bonus action.

At 10th level, your gambling runs deep. You may pay for uses of the On the Table feature with hit points. It costs 10x the table level (80 total HP for the Higher Level table). If you would be incapacitated by this, the spell fails. At 18th level, the spell is cast even when you become incapacitated by this feature, as long as the damage you would take does not exceed 25 hit points more than what you currently have.

At 20th level, you have an uncanny knack for succeeding when you need to. If your attack misses a target within range, you can turn the miss into a hit. Alternatively, if you fail an ability check, you can treat the d20 roll as a 20. Once you use this feature, you can’t use it again until you finish a short or long rest.

High risk, high reward is the only way to live for you. Your luck may run out one day, but as long as it’s not today, reap the benefits of your wagers!

At 14th level, you understand the very nature of arcane gambling. As an action, you may expend every wager point you have to perform a cataclysmic attack, casting a number of spell slot levels equal to the number of wager points spent. You may spread the spell slots across as many different tables as you wish, casting the spells simultaneously. When using this feature, you do not gain the reroll feature of On the Tables, and instead fail to cast any spells if any of the dice roll a 12.

You’re never one to gamble unless you’re sure you’ll win, so why not rig the game? Turn the tables? Someone has to even the odds.

At 2nd level, whenever you use the On the Tables feature and one of your d12s shows an odd number, you may increment or decrement the rolls by 1. You may use this feature by expending one wager point.

At 6th level, you learn counterspell. It doesn’t count against your known spells. Whenever you successfully negate a spell using counterspell, you may use the On the Tables feature as part of the same reaction, choosing from either the cantrips, first level, or second level tables. To use this feature you must spend two wager points, and you must have an available spell slot for the table that you are casting from.

Your mind spots an opportunity to strike. At 14th level, you may use the On the Tables feature, and choose the spell that you cast from the table list, instead of rolling to see the effect. If the spell usually requires an attack roll or saving throw, it still does. To use this feature, you must expend a number of wager points equal to the table level (8 for the higher level table).

Risk taking doesn’t seem as profitable to you as some people, you like to play it safe. Caution is key when it comes to gambling, you don’t want to lose everything…

At 2nd level, you rely on your cautious mind to keep you safe. Your AC, when not wearing armor, is 10 + Dexterity modifier + Intelligence modifier. Additionally, whenever you use the On The Tables feature, you can spend one wager point to forego rolling a d20 to determine the target of the spell, and instead guarantee your target. This feature does not negate the need to roll to attack or save against the spell you cast.

Every cautious gambler has a lookout to warn them when trouble is on its way. At 6th level, you learn the shield spell. It does not count against your number of known spells. As a reaction, you can spend two wager points to cast shield without expending a spell slot.

Prerequisites. To qualify for multiclassing into the chancecaster class, you must have a Charisma score of at least 13.

Proficiencies. When you multiclass into the chancecaster class, you gain the following proficiencies: Simple weapons and one gaming set of your choice.