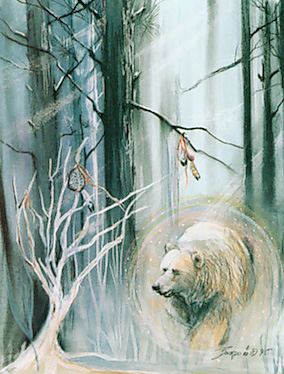 The omnivorous dire bear usually does not bother creatures that try to avoid it, but will aggressively defend a kill or other source of food. It will not hesitate to rip apart anything that might contain something edible.

A dire bear attacks by tearing at opponents with its claws.

Smite Evil (Su): Once per day a celestial creature can make a normal melee attack to deal extra damage equal to its HD (maximum of +20) against an evil foe.

Improved Grab (Ex): To use this ability, a dire bear must hit with a claw attack. It can then attempt to start a grapple as a free action without provoking an attack of opportunity.