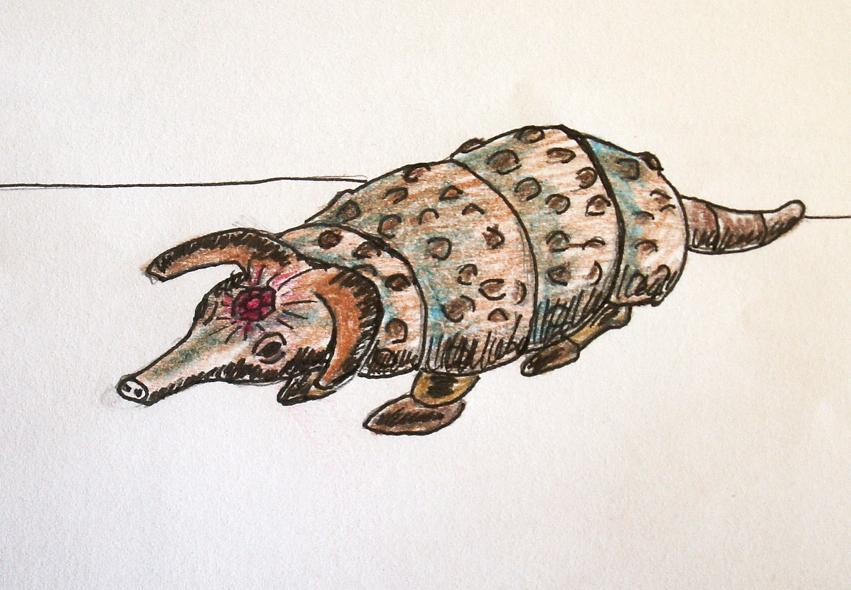 A carbuncle displays its gem

"Hey there little guy, don't you think it would be a good idea to give big brother that pretty gem of yours?"

The carbuncle is a rare, clumsy creature that appears as a mixture of pig, aardvark, and armadillo. Set in its head is a large shining ruby, which varies in value and is actually part of the animal. A carbuncle will often approach a party of adventurers and use its telepathy to communicate the value of its ruby to them. Obtaining this ruby is not a simple task, however, as the the gem turns to worthless dust if the creature dies. To further complicate matters, carbuncles can will themselves to die and have no fear or concept of death. It takes careful coaxing by a wizard or character of strong personality to get the carbuncle to give up its gem willingly (see below). It is likely that the first carbuncles were made by wizards for wizardly purposes.

A carbuncle is helpless in real combat. It is slow, unaggressive, and possesses no attacks (it's mouth is very small and contains no teeth - only a long, velvety tongue that is ticklish to the touch). Carbuncles have no fear, and are easily captured. When under any form of duress, however, a carbuncle must succeed a Will save of DC 10 or it will use its 'end life' ability and die on the spot. They are, however, immune to mind affecting effects (but not illusions).

Empathy (Sp): A carbuncle has the ability to detect the intentions of other creatures using its innate empathy. This ability functions as a constantly active detect thoughts spell (DC 12, CL 6th). Their limited intelligence prevents them from formulating more than basic concepts, however.

End Life (Ex): A carbuncle can will itself to die as a standard action.

Head Gem: The shiny ruby set in a carbuncle's head is actually a part of the animal. It's value can be 500 gp (70%), 1,000 gp (25%), or 5,000 gp (5%). These values are doubled for medium size carbuncles. Carbuncles often communicate the value their gem to those they meet. The gem regrows once removed at a rate of 100 gp per month, and the value of the gem may change each time. The gem can only be prized away if the carbuncle is willing to give it up. There is a 10% chance that one will give it up upon encountering a party of adventurers, but a 90% chance that it will require some coaxing. This cannot be done with mind-affecting spells such as charm or dominate. Carbuncles can only be coaxed by wizards or by characters with Charisma 15 or higher.

In order to convince a carbuncle to hand over its gem, characters must make successful diplomacy checks to raise the creature's attitude to 'helpful' (it is initially 'indifferent' unless it was attacked, in which case it is 'unfriendly'). Only three attempts may be made per day to coax a carbuncle, after that it no longer listens to pleas. If a carbuncle's attitude ever becomes 'hostile', or if a critical failure is rolled on a diplomacy check, it uses its end life ability and dies.

-Carbuncles have a +4 racial bonus to listen and spot checks.