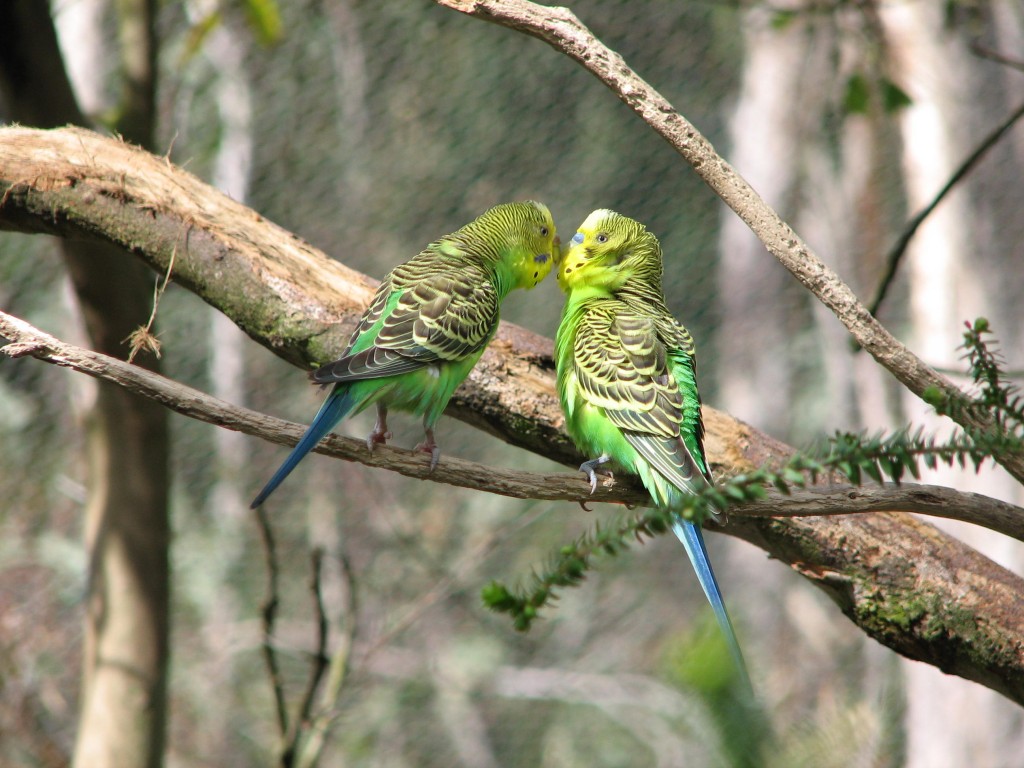 A pair of wild budgerigars.

The budgerigar, more commonly known as the parakeet or budgie, is a very small member of the parrot family. Budgies are very friendly and social, making them common pets.

Being a prey animal--and a very small one at that--the budgerigar always prefers to fly away rather than fight when confronted with creatures larger than itself. If cornered, a budgie resorts to pecking at its opponent with its beak.

Peck: The budgie's basic attack is to chomp its opponent with its beak, hoping to deter it from coming any closer. A budgerigar's beak doesn't have enough penetrating power to do anything more than irritate larger creatures. The peck normally does no damage to creatures larger than the budgerigar. On a critical hit, it deals one point of nonlethal damage. Against Diminutive or Fine creatures, it always deals one point of nonlethal damage, except on a critical hit, in which case it deals one point of lethal damage. Creatures with armor (including natural armor) that covers the entire body (such as full plate or most forms of natural armor) are completely immune to the budgerigar's attack, including its critical.

Damage from the peck attack is a combination of Slashing, Piercing, and Bludgeoning types.

Forest Camouflage: While in forest terrain, a budgerigar is able use the Hide skill without the aid of cover or concealment.

Fragile: A budgerigar's body is extremely frail, such that even the mildest blows have the potential to cause fatal injury. Whenever a budgie would take nonlethal damage, it must succeed on a DC 10 Fortitude save or take an equivalent amount of lethal damage instead. This does not apply to nonlethal damage caused by the environment (from extreme hot or cold weather, for instance) or by spells or similar effects.

Uncanny Dodge: As the rogue ability of the same name.

Improved Uncanny Dodge: As the rogue ability of the same name.

Typical Physical Characteristics: Colorful feathers; the belly is mostly green, the wings are generally a combination of yellow and black, the tail can be blue or green. The tail is almost as long as the rest of the creature. Budgies are generally 7 inches long and weigh from 30 to 40 grams.

A character can acquire a budgerigar familiar in the same way that he would acquire any other type of familiar. A budgie familiar provides its master with a +1 bonus on both Listen and Spot checks in all situations.