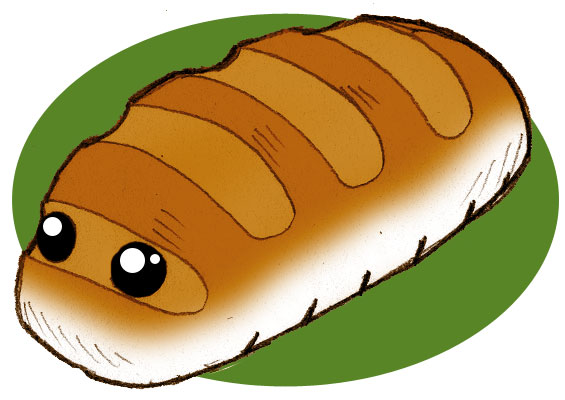 What looks like a crudely shaped loaf of freshly baked bread laying in the middle of a field, suddenly springs to life opening its beady eyes and then fleeing from the scene.

Bread spawn were originally believed to have been magically spawned from bread, however their appearance is simply a coincidence. Looking like a small crude loaf of bread with two small black beady eyes, a bread spawn possesses a rather large mouth with powerful blunt teeth and a tough but flexible frame. Bread spawn are omnivores that survive almost totally on the bark of trees and mainly grass. When confronted with violence, they leap away from any oncoming attackers.

A bread spawn does not like conflict, for they are very timid and shy creatures.

Astounding Leap (Ex): When a bread spawn is in danger it can launch itself clumsily out of the predator's reach. The bread spawn must roll a Tumble check and round the result up to the closest 10; this is how far the bread spawn throws itself. This is done as a move action and does not provoke an attack of opportunity.

Nutrients (Ex): A bread spawn's flesh under its thick skin is sweet and pale in colour. The meat from a bread spawn will last an average human a whole day without any other food. These magical nutrients also mean that when eaten the meat heals like a cure light wounds spell(see Bread Spawn Meat (3.5e Equipment)).

Motionless (Ex): A bread spawn has a +10 racial bonus to Disguise checks to resemble a normal loaf of bread.