For use with Third Edition[edit] 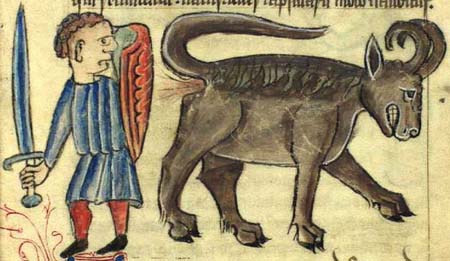 A bonnacon (also known as a bonnasus) is a large herd animal from the plains of Ymirhart, living similar to a bison. They are rarely seen, but are powerful creatures due to their dangerous dung. A bonnacon resembles a large bull standing 6 feet tall, with a horselike mane about its neck. Its horns are curled back behind its ears, like a goat's. The beast's coat varies in colour from light palomino to dark brown. Bonnacons often smell of dung, and are sometimes encountered with their rumps caked with dung.

Bonnacon bulls are territorial and will try to defend the herd if provoked, using its head-butts, but when it senses that it is in danger it runs away, using its dung as a last resort. Cows and calves are noncombatants and will flee at the first sign of danger.

The bonnacon's last line of defense is its dung, which is very hot to the touch. When preparing to use its dung, a bonnacon backs away with its tail lifted, before shooting out its load 1d12 feet away. Any creature that steps in bonnacon dung must take a Fortitude save (DC 10) or take 1d10 points of fire damage. In addition, creatures fighting within a 5-foot radius of the dung take a -1 penalty to Initiative as they are overcome by the fumes. To use this ability, a bonnacon must have eaten at least two pounds of food the previous day. Preparing to use dung takes 1d4 rounds and can only be used once or twice a day, depending on how much the bonnacon has eaten.

For use with Second Edition[edit]

Habitat/Society: Bonnacons live and graze on the plains like the cattle and buffalo they resemble, and travel in herds of up to 30, including cows and calves. They migrate during the seasons and are often led by the strongest bull.

Ecology: The stats given are for a bonnacon bull. Cows do not possess the dung attack, as they do not defend themselves - they are to be defended, not to defend. They tend to be more docile and less dangerous than the raucous males. Calves are also noncombatants and flee to the safety of their mothers whenever possible. Bulls often indulge of tests of strength to determine a leader if necessary. Like cattle, bonnacon cows have udders and can be milked. Bonnacon milk is worth 50 GP on the market, while cheese is worth 87 GP. Bonnacons are also sometimes used as living siege engines, using their dung to breach castle walls. To be used for siege, a bull must be raised from a young age. Bonnacon bullcalves are worth 30,000 GP per head.