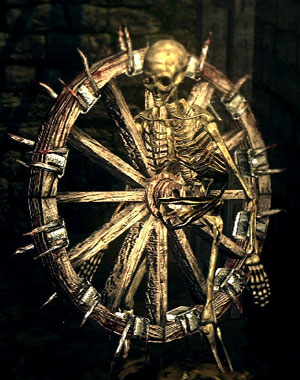 The bane of many a revenant, lost within a painted world.

Bonewheel Skeletons are an unnatural forms of undead that appear as humanoid skeletons twisted and intertwined with a large wagon wheel. The wheel, itself, is bedecked with jutting spikes of iron and steel, forming an unusual but effective weapon against anyone unlucky enough to encounter one of these devilish creatures. While many scholars and wizards alike have tried to answer the riddle of the origins of such creatures, they have only managed to surmise the vaguest of theories to date over what nefarious mind or force may have generated the likes of the Bonewheel Skeleton; As of yet, the first instance of the creature's existence is not credited to any such individual or incident.

While unusual, the Bonewheel Skeleton's appearance leaves little to alert the unwary or naive as to the danger it poses: After all, to most, it surely appears as a skeleton tangled upon the spokes of a wagon wheel and is therefore no more dangerous, and perhaps even more easily bested. Unfortunately for those who make this fatal error in judgment, while the skeleton does indeed lack a mind of its own, much like others of its kind, by some manner of sorcery or foul nature, it has adapted to its strange existence to a gruesome degree... even to the point of becoming known for their quick, unrelenting attacks and unpredictable charges. Many a fallen hero curses the Bonewheel, having met their end pinned against a wall and ground by the terrible creature's wheel.

Bonewheel Skeletons are completely entangled within their spiked wheels, and their own method of attack is spinning their entire bodies and rolling at the enemy in a mad dash, tearing them to shreds. Spinning their wheels makes an obvious sound, of metal striking the floor over and over again, alerting anyone without needing to make a Listen check unless they are deaf. While the wheel is technically identical to that of a wagon's wheel, and may even be one, the Bonewheel skeleton fights with the wheel as if it were a natural weapon.

When bonewheel skeletons are not rolling around, they can only stagger about at a very slow speed due to the wheel's spokes entangling their bodies and constricting their movements.