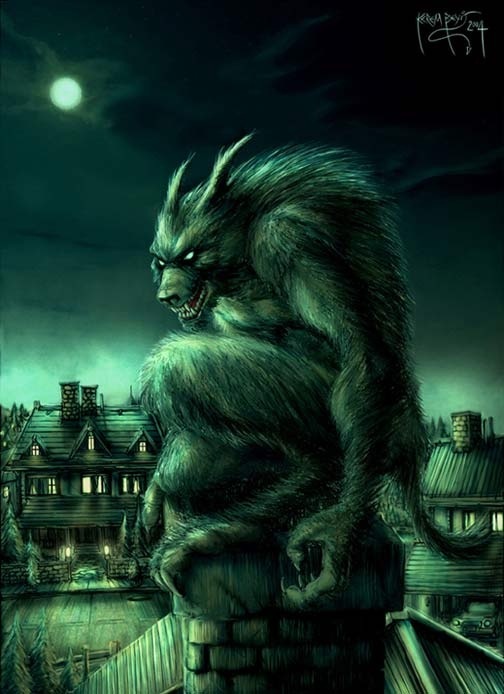 A werewolf on lookout during the full moon.

After ages of being hunted as beasts, butchered and put to the torch, the wolfmen realized that all beasts, man or wolf, fall into one of two categories, predator or prey, hunter or hunted, and they had been hunted enough. The eldest Lycanthropes began to train the younger generations, helping them master their gift. They were shown discipline, they were shown strength, they were shown what it means to be a predator, and when the clouds parted before the moon they were the Boffin Lycanthropes. One way in which they do not differ from their kin is their loyalty to the pack which, if threatened, they will fight to protect with a blind ferocity which is terrible (and usually very brief) to behold. No matter their idiosyncrasies, the control these talented few exercise over their gift gives them the tools to devour, protect or destroy whatever (and whoever) they see fit, they are the elite amongst the beasts, and they dominate the food chain.

Boffin Lycanthropes make great front-line fighters; they mete out lots of damage in melee combat. They can also absorb a considerable amount of damage due to their resistance to normal weapons and exceptional regenerative capabilities. However, they are not as effective in combat against creatures with substantial resistance or immunity to physical attacks.

Abilities: Strength is important for dealing more damage. Dexterity and Constitution are important for managing damage taken during combat and for improving saves.Intelligence and Charisma are the least important, as this is designed to be a generally combat-oriented class.

Races: Only Natural Lycanthropes and those who have been afflicted with Lycanthropy and are aware of their condition can become Boffin Lycanthropes.

All of the following are class features of the Boffin Lycanthrope.

Weapon and Armor Proficiency: Boffin Lycanthropes are proficient with all Simple Weapons and all natural attacks (claw, bite, and so forth) of their animal and Hybrid forms.

Control Form (Ex): Starting at level 1, Affected Lycanthropes that have knowledge of their affliction gains greater control over changing to their Alternate Forms. They no longer have to make a Control Form Checks to assume hybrid or animal form. In addition, Boffin Lycanthropes possess such a deep understanding of their lycanthropic gifts that they are no longer subject to an alignment shift (temporary or permanent) after changing. However, there is no stretch of time or wealth of experience that can dampen the moon's influence over her children and as such they are still required to make checks in order to return to their natural form or avoid changing during a full moon. Having integrated so totally with the curse in its veins, the affected lycanthrope can no longer become cured of lycanthropy, and is now capable of transmitting the disease to others through its bite.

At 1st level, the gear that can’t be worn or carried by the lycanthrope in their alternate forms melds into their bodies instead of simply falling to the ground when they transform. Items that do not have the Wild magical property do not grant their bonuses to the lycanthrope when in wolf or hybrid form.

At level 9, both the natural and affected lycanthropes gain greater control over changing their forms. It is now only a move equivalent action to change forms instead of a standard action. At level 18 the transformation is quickened even further, the lycanthrope can now change forms as a Swift Action.

Rapid Metabolism(Ex): At level 1, Boffin Lycanthropes gain the Rapid Metabolism Feat. You naturally heal a number of hit points per day equal to the standard healing rate + double your Constitution bonus. You heal even if you do not rest. This healing replaces your normal natural healing. If you are tended successfully by someone with the Heal skill, you instead regain double the normal amount of hit points + double your Constitution bonus.

Woodland Stride (Ex): Starting at 2nd level, a boffin lycanthrope may move through any sort of undergrowth (such as natural thorns, briars, overgrown areas, and similar terrain) at her normal speed and without taking damage or suffering any other impairment. However, thorns, briars, and overgrown areas that have been magically manipulated to impede motion still affect her.

Mind Over Body(Ex): At level 3, the Boffin Lycanthrope gains the Mind Over Body Feat. You heal ability damage and ability burn damage more quickly than normal. You heal a number of ability points per day equal to 1 + your Constitution bonus.

You can take this feat multiple times, but each time it applies to a different natural attack.

Enchanted Natural Attack (Ex): Starting at level 5, the Boffin Lycanthrope’s natural attacks become magical, gaining a +1 enhancement bonus. Unlike magic weapons created through normal means, she need not spend experience points or gold pieces to gain this bonus. For every five levels the Boffin Lycanthrope advances past 5th level this bonus is increased by a further +1 (+1 at 5th level, +2 at 10th level, +3 at 15th level, and so on). This counts towards overcoming damage reduction.

Improved Critical (Ex): Starting at 7th level, the Boffin Lycanthrope’s critical threat range with all her attacks increases by 1. This bonus continues to increase every 7 levels the character advances (+1 at level 7, +2 at level 14, and so on). This effect is applied before feats like Improved Critical are calculated.

Lycanthrope Zenith (Ex): At level 20, the Boffin Lycanthrope reaches the zenith of lycanthropic evolution. They gain and additional +2 to their Wisdom, +1 to their natural armor, and their damage reduction increases by an additional +5/silver in all of their forms.

Religion: Boffin Lycanthrope that worship gods keep quiet about it, normally not telling anyone about it unless they have their full trust. The most common gods are those with nature or animal Domains though any god can be worshiped.

Other Classes: Boffin Lycanthropes usually are very distrustful of other people due to prejudice against Lycanthropy, but once there friends, they are very protective and open with them. They get along fairly well with Barbarians and some Fighters due to similar fighting styles, they also relate well with Druids and Rangers due to respecting nature, they have a tense relationship with Clerics and especially Paladins due to them attacking them once finding out about their affliction. They tend to be neutral about spell casters realising the importance of magic but also its weaknesses...

Combat: Boffin Lycanthropes usually are at the front lines dealing damage and taking hits instead of allies, though this is harder when the opponent uses magic or silver weapons.

Advancement: Boffin Lycanthropes rarely multiclass once they start in this class due to the loss of improving their natural skills. In the rare cases that they do multiclass, they tend to take ranks in Rogue to benefit from their skills.

Boffin Lycanthropes in the World[edit]

Daily Life: When they are not honing their natural skills, they are often looking for others of their kind to pass on what they have learned. They often enjoy exchanging stories with other Lycanthropes.

Notables: Except in the rarest of cases, Boffin Lycanthropes prefer to only have their closest allies know what they are. But some have been known to get great reputations for their abilities in combat.

Organizations: While some Lycanthropes find pack life preferable, others find a solitary life style more to their liking. But in either case, they prefer to avoid large towns and cities. This stems from the distrust and hatred from most non-lycanthrope creatures.

NPC Reactions: Most people treat them as just another adventurer, but if they learn that they are a lycanthrope, more will either run in fear or try to destroy them.

Characters with ranks in Knowledge: Nature can research Boffin Lycanthropes to learn more about them. When a character makes a skill check, read or paraphrase the following, including information from lower DCs.

Boffin Lycanthropes in the Game[edit]

Boffin Lycanthropes have been noted as exhibiting a broader range of emotions and behaviors than most of their brethren. They have even been recorded engaging in conversation with local townsfolk and even purchasing wares, usually drenched in sweat from a long night hunting with their kin. While undoubtedly bestial, sometimes behaving in a manner considered by others to be blunt, crass or simply rude, it is clear that these exceptional specimens represent those among their kind who possess such mastery of their inner beast that they are able to control (even subdue, if necessary) their animal nature. These remarkable individuals have even been known to, even in the midst of a hunt, restrain their hazy thrill enough to halt the excited advance of their less disciplined packmates so they can survey the situation, allowing them to strike with lethal precision.

Adaptation: As a result of their superior strength and intellect, Boffin Lycanthropes often gravitate to alpha positions in packs of regular werewolves, but are usually just as sociable among their own as any canine. There are those who choose to live the life of a pariah, living in isolation from others of their kind so as not to test their control over their animal instincts. Those of this minority may live in exile by choice, shunning their former pack for whatever reason, or fearful of the harm they may have otherwise caused to others. They may also have been forced to adopt this lifestyle, having perhaps been abandoned by those who turned them, or cast out of their pack.