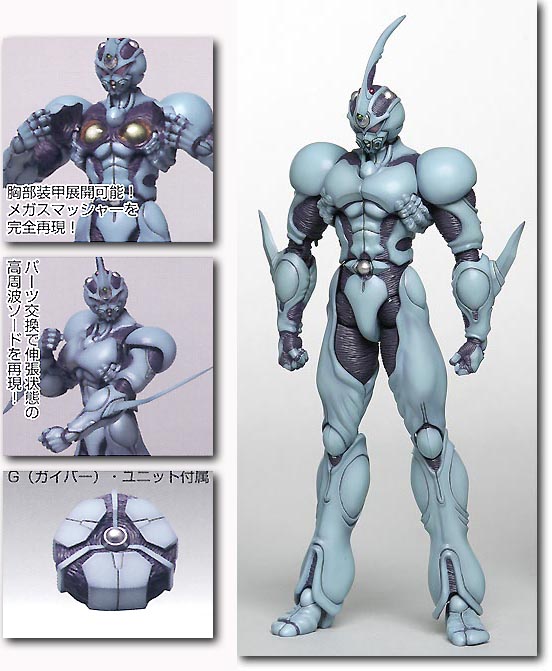 Bionoids are symbiotic creatures, one being a magical, organic essence, called the eye, the other being a host, generally an elf, half-elf, or human (the eye can only bond to a humanoid being, but can never bond to an orc). In "combat" form they are 10 ft. tall muscular creatures with iridescent exoskeletons, and hard claw-like blades protruding backwards from both forearms and the head. Their fingers and toes are clawed and slighty elongated. In humanoid form, bionoids are thin, well-muscled, and fairly tall. They are generally calm and contemplative. Although these creatures were instilled with an instinctive urge for combat without quarter, they are essentially good beings who constantly strive to control the powers of their implanted nature.

"Bionoid" is a template that can be added to any non-orc humanoid creature. The character's type changes to "shapechanger". Bionoids are characters who have a symbiont form, which shows itself during peroids of possible physical stress. When a character is in bionoid form they are large-sized creatures, and have seperate statisics than their "normal" form. The bionoid form does not grant any additional skills or feats.

The Bionoid is a template monster that can be added to any non-orc humanoid. The creation of a bionoid is invasive. The magically created organism, or eye, is disc-shaped, and has a single crystalline trigger within its center. When touched by any humanoid, the being's essence marks the eye, and it rapidly expands as a multitude of small, sinewy filaments and engulfs the host, all within the space of approximatly one-half of a second (considered a free action). The host remains cocooned, protected from all physical harm (damage reduction 10/+1) for two rounds, after which the filaments retreat back to the eye, which has been reformed within the hosts' skull. (If the host was damaged during this process, the eye triggers the transformation to a bionoid immediately upon completion.) At this time the host is allowed one Will save, DC 15, to break off the symbiosis and destroy the eye. Failure means the host is from then on, a bionoid. Symbiosis with the egg irrevocably changes the hosts' alignment to Good. If an orc touches the egg, it explodes in the same fashion as above, causing 2d12 points of constriction damage every round (DC of 25 to break out). Half-orcs are cocooned as a non-orc, but failure on the initial Will save means they suffer constriction damage as an orc. Bionoid eggs are rare, being found only in the possession of the Imperial Elven Navy (but see below).

After bonding, the host will feel a "presence" in the back of his or her consciousness, and can eventually learn to willfully call it forth or keep it subdued. Until then, any threat to the host will cause the bionoid to emerge, changing the hosts' body in the twinkling of an eye (a free action). Because of the instantaneous nature of the change, anything worn is destroyed. Magical items survive the change if they succeed at a Fortitude save (DC 18). Hosts of a Bionoid can take Control Shape (Wis) (see Monster Manual page 218) as a class skill, and can thereby learn to control the transformation.

The skill is adapted as follows:

If the eye is removed, the host's body immediately decomposes. The eye, however, traps the essence of its host, awaiting a new body. If a "marked" eye is presented with a living body, the eye reduces and restructures that body in favor of its stored master, resulting in the death of the previous body and a revival of the original master. (Bioniod characters are never "killed" unless the eye is destroyed, much like a lich and their phylactery. Being revived in the above manner does not result in the loss of experience or Constitution because the character's essence, or soul, never died.)

Bionoids cannot use armor or weapons unless specifically crafted for them. Any items surviving a transformation fall to the ground and are useless to the creature. Hosts are considered to be wearing chain armor in regards to spell failure (i.e. 30%) when in Bionoid form.

The offspring of a bionoid mating will be bionoids as long as the other parent is a non-orc humaniod.

as base creature or size large in bionoid form. type changes to shapechanger

As base character or 120 ft. as bionoid.

Bionoids can make use of specially crafted, huge halberds. A bionoid gets a +6 bonus to the attack roll of the base creature. Multiple attacks are determined as normal.

Bionoids haven't been in the service of the Imperial Elven Navy since the end of the Unhuman Wars, so most of the existing versions of these weapons are either heirlooms or were custom made. Craft checks to make these weapons should impose a +5 to the DC because of the complexity involved.

Augmented Criticals (Ex): The forearm blades of a Bionoid are very sharp. A bionoid threatens a critical hit on a natural attack roll of 19-20, doing double damage on a successful critical hit. This bonus stacks with the Improved Critical feat (bringing the threat range up to 17-20), but not with magic used to achieve improved criticals.

Crush (Ex): If a bionoid makes a successful attack with a claw, it can grab its victim—which must be medium-sized or smaller—and make a free grapple check that does not provoke an attack of opportunity. If the bionoid wins the grapple check, it crushes it's victim, dealing 2d8+Str points of damage per round until the victim breaks the hold or the bionoid lets go. If the bionoid attempts a grab, it can't use any of its remaining attacks (forearm blades or heel spikes) during that round, and cannot make any other attacks while crushing.

Energy Discharge (Su): The bionoid's most powerful attack is a spell-like effect similar to a fireball. The bionoid can open up twin dorsal plates on its chest, exposing two highly charged membranes. This takes a standard action, and causes 2d4 points of damage to the bionoid. These membranes release a 30ft cone-shaped discharge of bio-energy, which causes 6d6 points of damage to all within range. A Reflex save against this attack (DC 10 + 1/2 the bionoids' hit dice + bionoid's Con modifier) reduces this damage to half. Those immune to either fire or electricity take half damage, and can save for none (those immune to both energy forms are immune to this attack). Fire and electricity resistances are only half as effective in terms of damage negation (i.e. fire resistance 10 only reduces damage from this attack by 5). The damage to the bionoid means this attack is a last resort. The warrior must rest for a full day after such a discharge before using it again.

Crystal Eye (Ex): The bionoid's one weakness is the eye. The eye is hidden inside the skull of the character until "called", at which time it emerges from the center of the bionoid's forehead. If crushed, irrevocable death for the eye and the bionoid ensues. The eye is a Fine object, has a hardness of 10, 30 hit points and a break DC of 30. Resolve attacks on the eye as attempts to strike an object that is worn (see Player's Handbook page 135), which provokes an attack of opportunity. A successful attack of opportunity thwarts the attack on the eye. The eye has an AC of 18 (for size) plus the appropriate bonuses, and has the same immunities as an object.

Experienced bionoids have learned to combine their quick reflexes and high speed into a fluid dance-like pattern, not at all to disimilar from a bladesinger's dance. The following feats are common among those bionoids who have survived the years since the Unhuman Wars (these are not free feats—they must be paid for with available feat slots): Blind-Fighting, Combat Reflexes, Dodge, Exotic Weapon Proficiency (bionoid halberd), Expertise, Improved Initiative, Mobility, Multi-attack, Spring Attack, Weapon Finesse (natural attack), Weapon Focus (natural attack), and Whirlwind Attack.

Standard coins and goods, special items (no armor, clothing, or weapons due to the destructive nature of the change)

A bionoid's effective character level is +4.