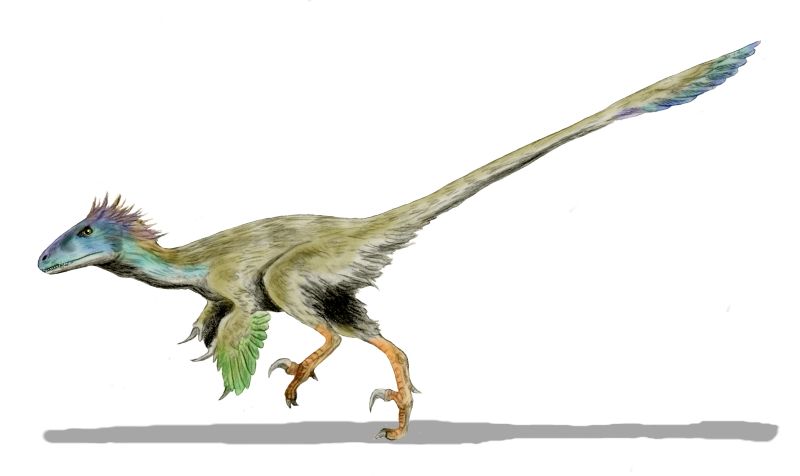 Many varieties of deathclaw behemoths are covered in plumage. 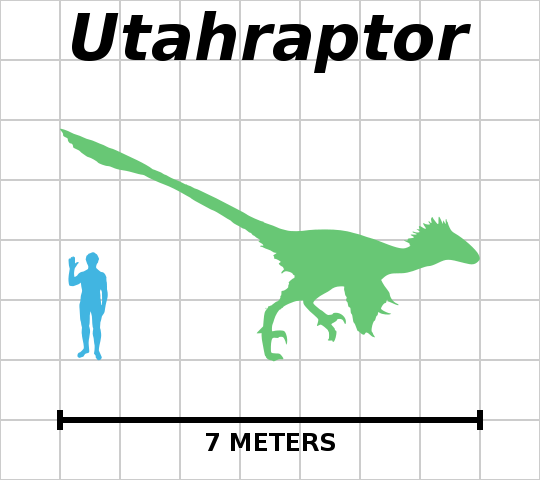 Although deathclaw behemoths are carnivorous, they are opportunistic and will scavenge off of other creatures' kills when possible. They are rarely encountered alone, gathering in packs that can number twenty or more in size. The more deathclaws there are in a pack, the larger the prey it can potentially take down: even small groups can kill prey the size of a giant. A smaller but closely related species known as the lesser deathclaw behaves in much the same way but is limited to proportionately smaller prey.

Deathclaw behemoths attack on the move. They form a loose ring around a potential victim and then take turns running to the opposite side, raking at the prey with their vicious claws on their way past. Using this tactic, they can wear down creatures of almost any size, given enough time, and present the potential prey with very little opportunity to fight back. Deathclaw behemoths serving as mounts tend towards a similar tactic, alternating the exact shape of the ring depending on how many friendly creatures are present.

DC 15: Deathclaw behemoths are reptilian pack hunters. They are territorial and will attack virtually anything, particularly during mating season.

DC 20: Deathclaws circle their prey in a ring and alternate attacks. Very few creatures can survive such an onslaught, as they are given very little opportunity to fight back against the deathclaw's constant movement.

Deathclaw behemoths are most easily trained when kept away from others of their kind. In groups, they tend to revert back to their natural pack tendencies and can quickly turn on their riders, unable to distinguish them from any other potential food source. 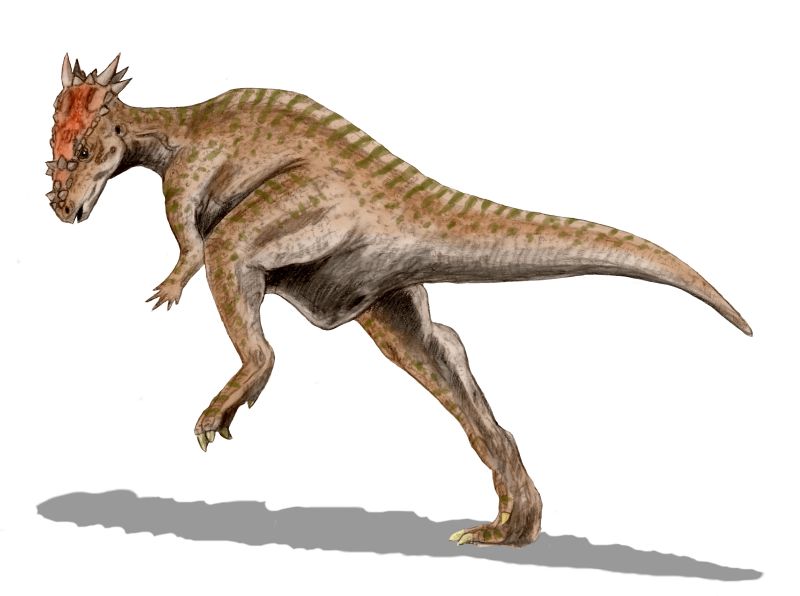 A typical mauldhead behemoth. Not all species have spikes like this one, but they're common. 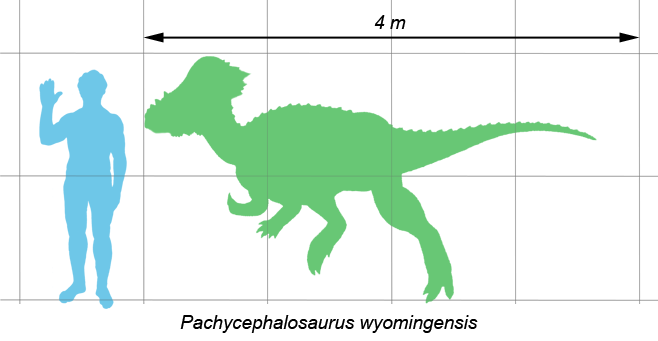 Maulhead behemoths are a bipedal species with a thick, bony plate that covers most of their skull. Although several similar species exist, they lack the signature ability to ram opponents that the maulhead has, as their skulls are too thin to sustain hard impacts. Maulheads are very territorial and will charge virtually anything that's not significantly larger than themselves. They are usually encountered alone except during the brief mating season, which usually takes place during the spring.

A maulhead behemoth initially attacks by charging any creature that it perceives as a threat. Once in melee combat, it simply headbutts the foe until it dies or leaves the maulhead's territory. Maulhead behemoths are excessively stubborn and will usually fight to the death.

DC 15: Maulhead behemoths are bipedal reptiles that live in forests and open plains. Although they feed primarily on plants and insects, they're extremely aggressive and will attack almost anything.

DC 20: Maulheads will only continue an assault for as long as a creature remains in its perceived territory - a creature can potentially avoid further attacks by simply leaving this area. Aside from that, they will fight until slain.

Finback behemoths come in many colors, but they usually blend in with their surroundings.

Finback behemoths resemble enormous lizards with a large dorsal fin on their back. This fin serves primarily to help regulate the creature's body temperature, but also helps attract mates and ward of smaller predators. Finbacks are also known for their extremely powerful jaws, which can easily immobilize a full-grown human. Once it has a firm grip on its prey, the finback shakes its head back and forth, sawing into the victim's flesh with surprising ease. Those who live near the forests and marshes that finbacks call home have learned to give them plenty of room when encountered.

A finback behemoth relies entirely on its powerful jaws to take down prey. It bites at a potential meal until it gets a hold, then attempts to drag it off into thick underbrush or even a pool of water where the finback can more easily subdue its prey. It uses rend whenever the ability is available. Finbacks prefer to attack a single creature at a time, so if forced to fight multiple targets it may seek to retreat and almost always does so after it has used tearing jaws.

DC 15: Finback behemoths are vicious predators that live in swamps and forests. Although capable of taking down creatures larger than themselves, they prefer easier prey like humanoids or small game animals.

DC 20: A finback behemoth is not particularly skilled at fighting multiple opponents and may flee if presented with more than one or two targets. They are primarily a risk to injured or otherwise weakened creatures, including children.

Half of a terrorfin's length comes from its neck.

Terrorfin behemoths are aquatic creatures that feed primarily on small fish. Although they spend their entire lives in the water, terrorfins breathe air, so they surface with fair regularity. This, coupled with the creature's natural curiosity, makes encounters between terrorfins and sailing vessels quite common. They have been known to mistake smaller boats for food, although they usually cease their attack once they realize that the vessel is not a tasty morsel.

If a terrorfin believes a creature to be a potential meal, or if it is attacked, it attempts to strike the creature from below. It has enough intelligence to try to keep foes away from itself, using its reach and snapping ability to maneuver around foes. If it feels that its life is in danger, a terrorfin will use darting bite against the farthest opponent and attempt to flee.

DC 15: Terrorfin behemoths are marine animals that feed on fish. They are not especially dangerous to humanoids, but they sometimes attack boats and swimmers, mistaking them for food.

DC 20: Terrorfins do not usually press an attack unless threatened. When forced to fight, their primary strength is their ability to move rapidly around the battlefield.

Despite their intimidating name, terrorfins are relatively docile creatures and can be easily tamed if raised from birth. They are favored over more common mounts (like sharks) by most peaceful aquatic races, and are sometimes even raised by terrestrial species who make their homes near the water.

Scythe Claw behemoths are giant bipedal beasts with long claws on their hands. Their claws can be several feet long. The main purpose of the claws are to grab plant life but they double as effective weapons. The scythe claw is large and idiotic herbivore. They have a almost upright stance, a long neck, and a small head. Scythe claw plumage is sometimes seen as a symbol of strength.

A scythe claw behemoth will usually start with sweeping strike and start using careful strike after they have determined the biggest threat. If it's enemies focus on other monsters it may leave the encounter.

DC 20: Scythe Claw behemoths are bipedal reptiles that have long deadly claws. The claws are mostly used for feeding but they also can be defensive weaponry against predators.

DC 25: Wild scythe Claw will generally only attack when threatened. If ignored for long enough they may chose to find a safer location instead continue the encounter. 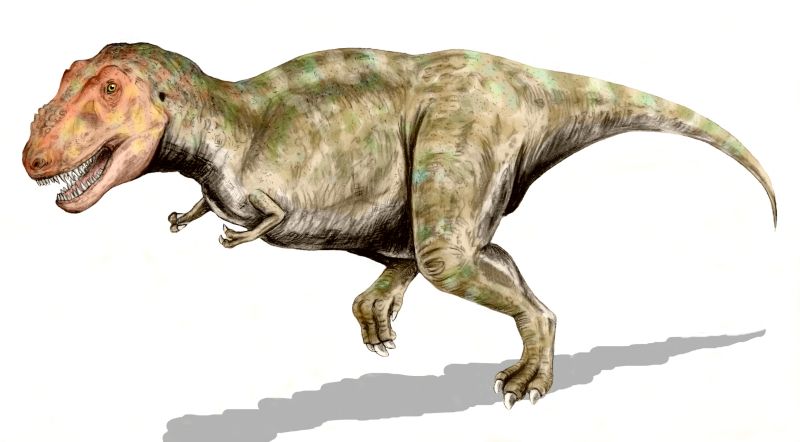 Dreadfangs are among the largest and most powerful of behemoths. They stand as tall as a titan, and they have been known to kill adult dragons from time to time. They are fiercely territorial and will pursue intruders past the boundaries of its hunting ground — oftentimes the prey will collapse of exhaustion long before the dreadfang gives up pursuit. The brave and the foolish sometimes attempt to domesticate a dreadfang as a mount, but only the truly powerful can keep one under control for any extended period of time. The dreadfang is often regarded as a symbol of strength or bravery — in heraldry it is used as a symbol for rulership, and various barbarian tribes hunt the dreadfang as a rite of passage into manhood.

A dreadfang behemoths is a savage, if simple, combatant. It uses jaws of dread against a single target repeatedly until it can get a solid grip on it, then uses crushing fangs each round until the foe manages to escape. A mounted dreadfang typically follows the same strategy, as the rider can easily subdue enemies caught in the behemoth's jaws.

DC 15: The dreadfang behemoth is a massive reptilian predator. It can consume vast quantities of meat in a relatively short period of time, and it often claims a hunting ground dozens of miles in diameter.

DC 20: Dreadfang behemoths are resilient hunters, and can track prey for miles. They will typically track creatures long after they have left the dreadfang's hunting ground, as they feel the need to eliminate the threat before it can return.

Dreadfangs are extremely dangerous to train due to their violent nature, but it can be done with a lot of time and effort, or through the use of magic. A tamed dreadfang makes for a potent ally (not to mention a rather unique sight).