A Goliath with a totem of a bear shows off his resilience with the power of the animal represented by the totem. A Halfling stands up and let out a ruge roar, and then the goliath sit downs in terror by thr true might of a bear

A human walks through the frigid steppe, but he doesn`t feel cold at all. When he feels hungry, he breake the ice with he´s bare hands, leaving a gigantic crack behind 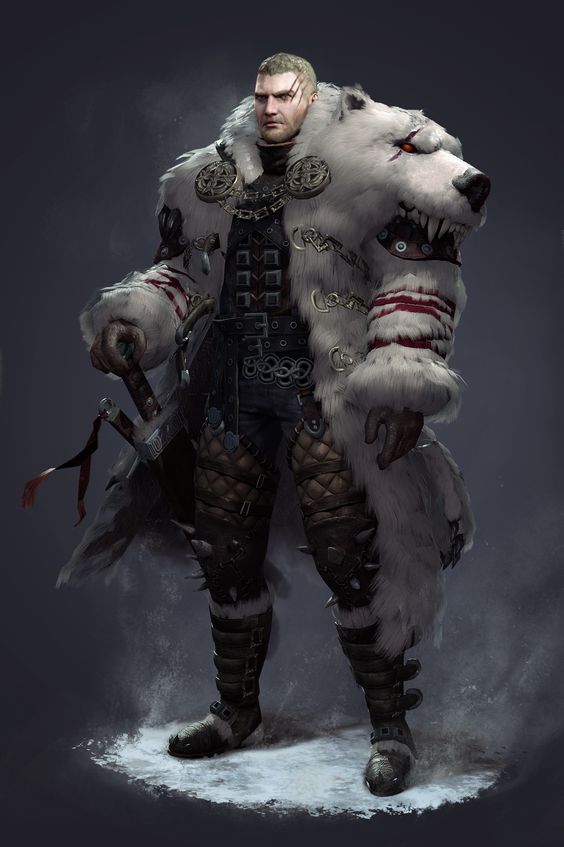 You can make a Bear knight quickly by following these suggestions. First, Strength should be your highest ability score, followed by Constitution. Chose Backgrounds that give you Strength based proficiencies or nature abilities

As a Bear Knight you gain the following class features.

At Level 1, you have the clothes on your back, a little bit of pocket money, and somethings you gained from your warrior friends as you set out on your journey to become a full bear knight. On your back lies a Cloak made of a fallen bear. This cloak gives you a +2 to your AC when you wear light armor, a +1 to AC when you are wearing medium Armor, and when you are wearing no armor, your AC is equal to 10 + your constitution modifier + half your strength modifier. At level 10, this becomes your Whole strength modifier. You can use a shield and still gain this benefit.

Your time in the forest training with your clan and your small connection to Torngarsuk grant you honed senses. At level 1, you gain advantage in all survival checks, all nature checks in the forest, and all perception checks requiring hearing or smelling. However, due to your secluded life in the woods, you gain disadvantage in all deception checks and survival checks (in a city or a town).

At Level 2, you get to chose a path on which you will chose to study a type of bear. Your choices are either a Grizzled Bear or a Black Forest Bear. When you chose, Torngarsuk will visit you ( in a way your DM chooses, ie, in a dream, a hallucination, you actually meet him. Choosing a path can, if you choose, change the color of your cloak. These subclasses are detailed at the end of the description.

At level 3, you can invoke the power of a bear to gain claws and deal damage. For a bonus action, you can invoke the bear within you. For one minute, you can grow mystical, green glowing claws that shed dim light for 5 feet. These claws deal 2d4 slashing damage + strength modifier. You are proficient with these claws and the damage of the claws count as magical for the purpose of overcoming resistances and immunities. these claws also count as light weapons. As another option, you can forgo the claws to gain 10 temporary hit points and a +1 to AC. This, however, only lasts for 2 rounds and your cloak sheds dim light for 5 feet. You can invoke the bear a number of times equal to half your proficiency rounded down

Your connection to Torngarsuk is suddenly stronger as you have proven yourself as a warrior in his eyes. At level 4, during a bonus action, you can eat one ration of food and regain 1d12 + Constitution modifier of temporary hit points. You can do this a number of times equal to you Constitution modifier. During a short rest, your hit dice heal an extra 2 hit points per dice used. You also gain advantage on all saving throws against being poisoned and spells that deal poison damage. (Also means you can drink more without getting drunk)

At level 5, when you take the attack action on your turn, you may attack twice instead of once.

Having been a fighter for so long, especially one from the forest, and have developed techniques to fight in the wilderness or with the wilderness. At level 6, you gain advantage in stealth in the forest or a bushy area. Also, your climbing speed is equal to half of your movement speed. you also gain the ability to pounce on a target. As a bonus action, you can mark a target. You must attack this target after you mark them no matter what. Then, if you are 15 feet or more above the target, you may preform a pounce. This means you fall on to them and still take fall damage. This attack deals damage equal to double the fall damage you take plus your constitution modifier. You may preform this action a number of times equal to half of your constitution modifier rounded down.

At level 10, you are a dominant force in the animal kingdom even if you are not an animal yourself. The animals have learned or recognized your prowess, and, if they haven't already, will learn to listen to you. You gain the ability to talk to animals however they cant get very specific because they don't understand you fully. You don't understand animals excepts for nodding and shaking of the head. Also any beast that is attacking you must make a DC 8 + Your Proficiency + Strength modifier wisdom save or they don't attack you whatsoever that turn. Once they succeed in this, they dont have to roll this save for the next minute. You also gain an animal companion CR up to 1. This raises to CR 3 at level 12.

At level 11, your voice turns into a much more rough version of your own voice. Tough, this let you do a mighty roar, imposing fear in the battlefied. As a Bonus action, you may roar in a radius of 60ft to let your enemies with guards down while they tremble in fear. The DC is 8 + Your Proficiency + Your Strength Modifier. If the creature fails a Wisdom Saving Throw, it is affected by the Frightened condition and it´s AC drop by one. The AC debuff only counts to creatures that the target is scared of. If the creature succeds, it´s immune to this feature for 48 hours. The effect last for 1 minute, and after the effect ends, the creature is also immune for 8 hours. You can use this feature 2 times per long rest

Superior Essence of the Bear[edit]

At Level 12, you are now imbued with a stronger bear spirit. Your claws now deal 3d4 and you can chose, every time you invoke the power of the bear, what type of damage the claws deal. Also when you invoke the bear, if you chose to forgo the claws, you gain 20 temporary hit points and a +2 AC. this still lasts for 2 rounds

You have by this point have proven that you are a force to reckoned with on the battlefeild. At 14th level, you are able to put some umph behind attacks with your bear-like strength. You have advantage on all strength checks and you no longer affected by caring weight of weapons and mundane items. Also, when you make an attack, you can chose to give a +3 to attack and damage rolls. However, if you do this, you cant take bonus actions or reactions until the start of your next turn. you can do this a number of times equal to your proficiency bonus plus your strength modifier.

You know all of the spells on the basic spell list and additional spells based on your subclass.