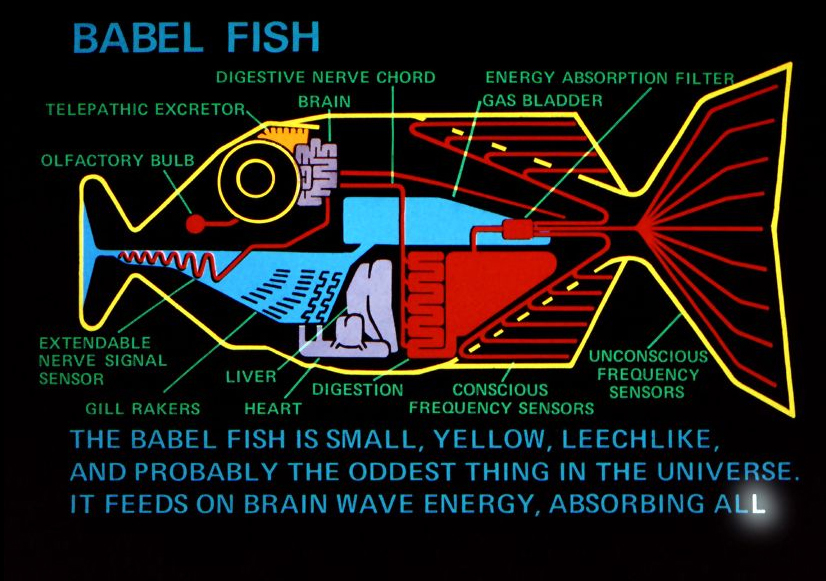 A diagram of a Babble Fish[1]

A babble fish is completly dependant for protection it makes itself incredibly useful so that the host will keep this completly dependant symbiotic creature. Strangly the babble fish isn't a fish at all it looks almost exactly the same as a very small manta ray. It has no mouth, but it does have two shiny black eyes identical to manta ray eyes. It is completly harmless to anything bigger than a minnow and even then it can't really do much damage to it anyways. The babble fish is aquatic so if it is removed on land and not placed within a water source or kept wet at all times it will die of suffocation before it dies of starvation from being away from a host.

A babble fish can only attach itself to a willingly or helpless host(as a full-round action). In general, a creature either seeks out a babble fish to gain its benefits or encounters it accidently while in a watery location(i.e. a pool of water or damp cave). A babble fish has a soft suction cup like underside, by placing it against the back of the host creature just above the shoulder blades, it holds on extremely tightly while like this it telepathically links to the spine of the host, simutaneosly tapping into the speech center of the brain of the host. Attaching or removing it deals 1d4 Wisdom temporary damage.

Translation (Ex): The babble fish absorbs any intelligible words it hears and they are translated to a language known by the host, as if constantly affected by the spell Comprehend Languages(effect not magic therefore not subject to anti-magic field), the translation doesen't work with written words however. The translation effect does not translate magical words(does not make host suspetible to language-dependant spells/spell-like abilities).