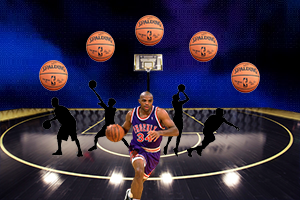 B-Ballers are seen by many as the pinnacle of their respective races, and revered by followers called 'Fans'. Roaming B-Ballers often look for fresh courts to slam in and new crowds to jam with.

B-Ballers work best with others, because there is no "I" in team.

Abilities: Depending on what play style you choose, your attributes will differ. Strength and Constitution are important for player who prefer to dunk on their opponents or throw balls really hard at people they don't like. Charisma is important for the team Captain as he tries to create openings and raise his teams morale.

Alignment: B-Ballers can be any alignment. Lawful B-Ballers tend to stick to the plan and value victory, while Chaotic players only care about how flashy they look while they play. Good B-Ballers always play by the rules and up hold a sense of honor, Evil B-Ballers use underhanded tactics when the ref isn't looking in order to gain an advantage.

Weapon and Armor Proficiency: B-Ballers are condition to only wear light armor, usually something that doesn't get in the way of their skills. As for weapons they are proficient with Exotic Weapon (Ball) and any Improvised Spherical Object.

All of the following are class features of the B-Baller.

Skill Focus(Jump): All B-Ballers are required to train to jump higher in order to gain the advantage in the air. B-Ballers gets this feat for free at Level 1.

Play Style(Ex): At Level 1 all B-Ballers must choose one of the three play styles below. Special: This class feature only works when using a ball or sphere shaped object as your primary weapon.

Bonus Feat: B-Ballers work so physically hard, its not suprise that they would pick a a few tricks here and there. B-Ballers get Bonus feats based off the Fighter Bonus Feats.

The Zone(Ex): B-Ballers who have trained long and hard are able to enter The Zone, while in The Zone, The B-Baller enters a state of hyper-concentration where the only thing that matters is victory. As an Immediate action, a B-Baller may enter The Zone, as long as one of the prerequisites are met.

Elemental Zone(Ex): While in the zone you feel your body take on properties of an element. When you enter the zone, you gain one of the elemental properties below. You must choose one of these elements when you reach Level 6 with the B-Baller class, once chosen you cannot change it because the element is a reflection of your play.

Armor Mastery (Light)(Ex): After all the strenuous trials the B-baller goes through, he comes used to wearing armor and treats it like a second skin. Any light armor you wear no longer inflict armor check penalties and its weight is now negligible.

Aspect of the Wild(Ex):After many games of B-ball players gain an instinct for the game. Choose one of the following aspects below, once you have chosen you cannot change it because the animal is a reflection of your own feral instincts.

Armor Master (Medium)(Ex): After B-Balling for so long in armor, your body is conditioned to have the extra weight of the armor and team on your shoulders. When you wear Medium Armor, you can ignore the armor check penalty. The weight of your medium armor is now also negligible. Also whenever you sleep in your armor you no longer become fatigued.

Deep Zone(Ex): You've been in The Zone so many times that it feels natural. You realize that your always in a state of hyper-focus. You are now always in The Zone. As a free action you can suppress or re-enable the effects of The Zone.

Ascended Zone(Su): You have proven to both yourself and Charles Barkley that you are strong enough to slam with the best. Its said that the great B-Ball gods once played on the material plane, but the destruction of their games caused too much damage so they moved into a different plane so they can go all out. Now that you have ascended to such a level, you have been granted permission to enter the realm of the B-Ball gods to defeat your enemies. Once per day as a standard action, while in The Zone you can pull all of your allies and enemies into the Astral Plane. While there you are placed on an astral B-Ball court and the effects of The Zone is doubled for everyone who is in The Zone.Special Those who are effect by the Team Zone will have their effects equal to the Team Captains Zone, which is doubled while in the astral plane.

Religion: B-Ballers tend to worship Charles Barkley. However, Barkley only notices those B-Ballers who are gifted or great, so everyone strives to be the best.

Other Classes: B-Ballers interact fine with other classes, often grateful to other classes that can help them play better.

Combat: B-Ballers can fill a few roles, such as melee Fighter with the Dunk Master with high mobility using Tumble to their advantage or Ranged Fighter with the Point Guard by using brutal throw to really make throws hurt. They can also assume a leadership role with the Team Captain play style rallying your team with their amazing charisma.

Organizations: There are an abundance of teams, most notably the 'Lakers', the 'Miami Heat', and the 'Redskins'. All of these teams, however, belong to a master guild named 'The National Association Of Basketball', or NBA for short.

NPC Reactions: Many of the Fans will ask for merchandise, the B-Baller's personal print, or some other souvenir to remember the meeting by.

Characters with ranks in Knowledge (Local), Knowledge (History), Knowledge (Religion) can research B-Ballers to learn more about them. When a character makes a skill check, read or paraphrase the following, including information from lower DCs.

The DM can decide how much damage your weapon does. For improvised sphere shaped objects, you should use the weapon weight rules that are described in Complete Warrior (pg. 159) for damage.
Here are some examples my friend and I came up with. All the weapons below are considered Exotic 1-handed Melee Weapons or throwing weapon.
The Critical Range is can be decided by your DM.
Basic Basket ball: 1d4+Strength
Lead Ball: 1d6+Strength
Special:Spiked Retracting Ball: 1d10+strength. When this ball hits, it impales itself into its target. When the ball is ripped from the target (via return enchantment or another means) it deals an extra 2d6 piercing damage.
You and your DM can create other weapons depending on what you guys want to do.

Since this is a homebrewed class you and your DM can make up feats that will help your character. For example creating a rapid shot feat for throwing weapons rather than having it be limited to range weapons.